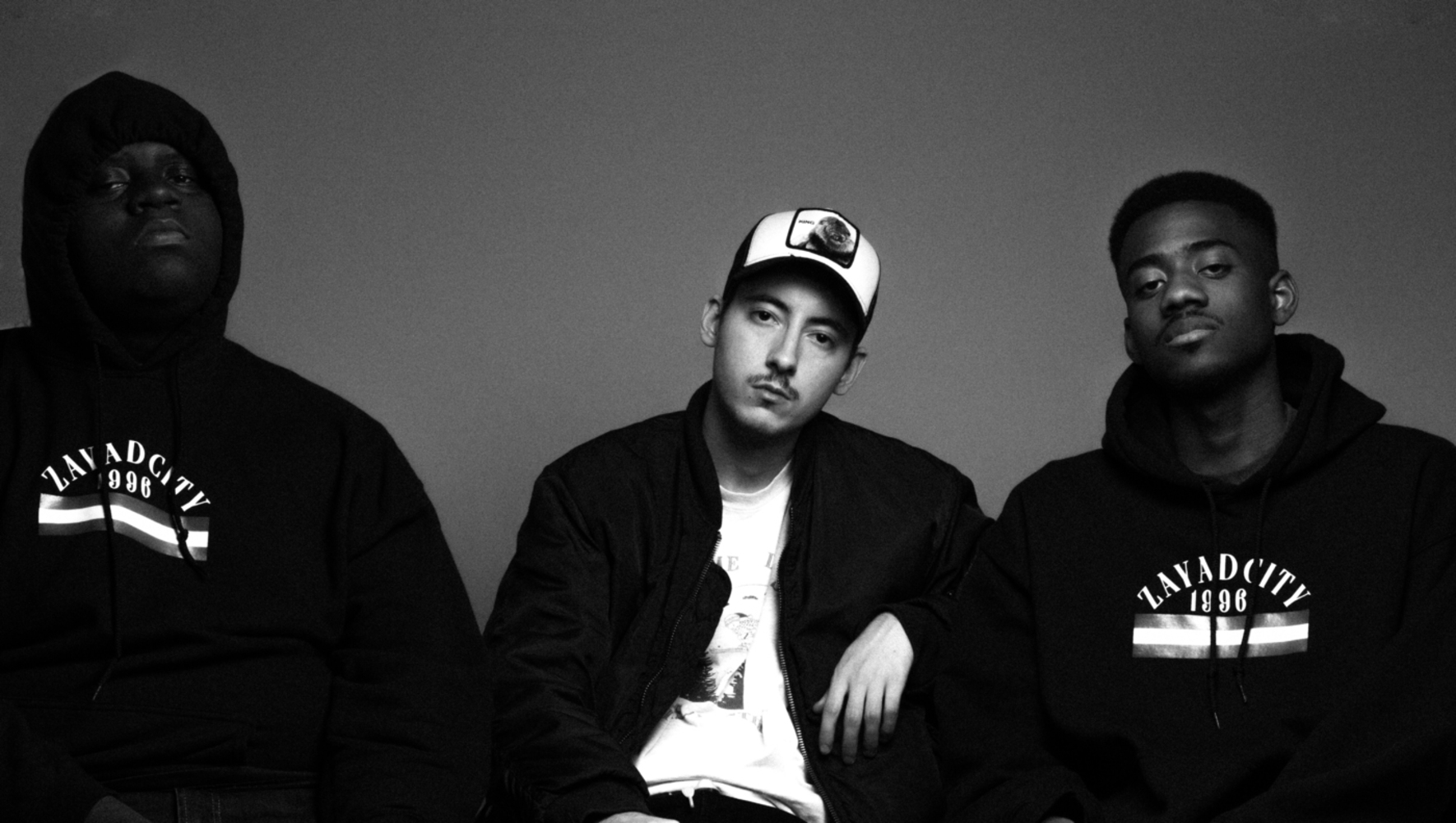 Plenty has been written on Montreal’s bubbling beats scene. Its most celebrated export, Louis Kevin Celestin (a.k.a Kaytranada), has become an international leading name, and his successes have both shone a light onto and provided a platform for various other artists in this sonic realm, some of whom are now starting to make names for themselves beyond their home state. Of all these, it is perhaps Planet Giza, the collaborative project of Rami B, Dumix, and Tony Stone, that is most widely tipped for success.

The trio, all in their very early 20s, connected in 2013. Dumix and Tony Stone, with disparate influences and inspirations, were already working together as The North Virus at this point but spontaneously hit the studio with Rami B one evening. The rather unexpected fruits of this initial jam were highly regarded; “Old School Convertible,” released by The North Virus x Rami.b(izzle), garnered much attention on Soundcloud and inspired them to begin the Planet Giza project.

Since then, they’ve released numerous Soundcloud exclusives and five EPs, including September 2017’s Détour: Zayad City, which featured a Kaytranada collaboration. Sonically speaking, it drew references from rap, hip-hop, r&b, and funky house, adding vocals and capturing the trio’s artistic growth—a indication that they’re real artists rather than just young, talented beatmakers. For some, it was evidence enough that they are to be the next big thing to come out of Montreal. With talk of a debut album in the works, and a new EP just released, the trio caught up with XLR8R, looking to reflect upon their journey thus far and discuss plans moving forward.

My understanding is that Dumix and Tony Stone were working together before Rami B joined. Can you talk me through your backgrounds in music—and how did The North Virus come about?

Dumix: Our backgrounds were kind of different because I was more inspired by southern hip-hop and Tony was inspired by legends like J.Dilla, Madlib, etc. We clicked one day at a mutual friend’s house and I was thinking that if we clicked then I could learn his style and he could learn mine.

Tony Stone: The North Virus is really a clash of styles that turned into a specific sound. It helped us improve twice as fast as producers because we were both putting a crazy amount of work at the same time.

Was it clear even at this time that you wanted to be full-time musicians?

We didn’t know how far it was going to bring us but we for sure already had a big vision about it.

You only began working with Rami B around 2013. How did this relationship come about? And what was it that inspired you to all go in the studio together?

Rami came to Stone’s house one day and we were chillin’, not even thinking about making beats and then Rami had to leave in an hour and we were like, “How about we make a beat right now.” That’s when we made “Old School Convertible.”

So “Old School Convertible” was the first music you ever made as a three?

Yup, in Tony’s basement in Terrebonne. It wasn’t planned or anything.

Were you surprised by the success of the track? Did you know it was good?

We were more than surprised because it was a track that we made in 45 minutes and didn’t think anything about it. Of course, we were excited about it but we did not expect it to do this well honestly. It made us realize that we had a good chemistry though.

“Old School Convertible” was actually released as the North Virus x Rami.B(izzle). Did the success of this record inspire you to create Planet Giza—a more permanent collaborative project?

Definitely, we went by The North Virus x Rami.b(izzle) at first, then around 2014, we changed it to Planet Giza.

Where does the name Planet Giza come from?

From Giza pyramid complex. We thought it was a cool name so we kept it, plus we’re a trio so it kind of made sense.

What happened after the release—how much more material did you make?

We made beats all together like every day and then we started working on an EP that we released like two months after called Etorkizuna.

Did you have a clear idea of how you wanted Planet Giza to sound?

We’re not chasing a specific sound right now we just want to be able to make all genres of music while having a touch of Giza in everything.

You’re a good example of Soundcloud success. Did you send demos out to labels?

Yeah, haha—we used to send a bunch of emails to all the internet labels etc. We still do sometimes haha.

Which labels, in particular, are appealing to you?

For the past year, we thought a lot about Top Dawg Entertainment. We feel like with this label we could develop more of our style and possibly do something huge. We also like Ninja Tune and XL Recordings.

Are you surprised by the following you earned through Soundcloud? Do you monitor it?

Yeah, it’s kind of a surprise because the following has come organically.

Do you all live in Montreal?

Rami: Actually, I live in Laval, Tony in Gatineau, and DoomX in Saint-Léonard which is in Montréal. But yeah, Tony and I used to live in Montreal.

What was it like growing up in Montreal, generally speaking?

It’s dope, different people from different culture. You can eat any kind of food that you want, only thing is, it’s really cold sometimes, like -30 cold.

Have you all always been involved in the Montreal beats scene?

Yeah, the people from the scene acknowledged us really early. We were like 16-17 years old at the time. Also, shout out to Artbeat Montreal who gave us the platform to really showcase our music.

How did each of you get into music—what are your respective musical backgrounds?

Rami: I’ve always been wanting to do something around music, specifically hip-hop. So yeah, like every kid who listens to hip-hop, I started writing raps in French etc. But I sucked. Then I started learning about producing and sampling by watching a video on YouTube of Pete Rock making a beat on an MPC and, yeh, the rest is history.

Tony Stone: I made my first beat after seeing Rami cook up in front of me. I went back home and started putting my 10,000 hours in. I always used to talk a lot (still kinda do) so I told myself why not try and rap on these beats. It was hella fun so I stuck with it.

Dumix: There was this collective named Dreamakerz from Montréal that used to make beat making videos and them guys were really ahead of their time. I saw that they were making music on FL studio so I downloaded it, started watching some tutorials, and one the guys from Dreamakerz slowly became one of my mentors and the rest is history.

What music were you all listening to growing up?

Rami: My parents were mostly playing Raï but I got into hip-hop early because of my older brother and video games.

Tony: My folks were very versatile with their music selection. It could go from disco to alternative rock to R&B, all that. But one day my pops introduced me to Biggie Smalls and it was a wrap after that.

Dumix: Growing up, I had a lot of different type of music playing around the house, my parents were listening to Kompa, my brother was listening to Jay-Z, Fabolous, Nas, 50 Cent, etc., and I was listening to T.I, Young Jeezy, Gucci Mane, Lil Boosie, Pimp C. A lot of Southern hip-hop.

Studio time as a three must have some complications. How does it work in the studio? How do tracks come together?

We trust each other’s ideas so it’s not complicated at all. Sometimes we just finish songs that we started on the internet or we start something from scratch. We all work pretty quickly so it’s easier.

How often do you all get in the studio together?

At least once a month, but Tony lives far from us so it’s not always necessary to go to the studio but when we do we make the most out of it. Our chemistry is really strong.

Who raps and who makes the beats?

We all make beats and sometimes Tony raps on ‘em.

Where is your studio?

Talk to me about the role of Kaytranada. How much guidance has he given you?

He’s a big inspiration for sure, there’s not a lot of hip-hop producers that made it this big from Montreal. He gave us a lot of opportunities that we didn’t expect so we’re definitely grateful to him.

How did you get to know him?

Rami: I was in the same collective as him, called Alaiz. That’s where I met guys like Dr. Mad, Lou Phelps, Da-P, HK, etc.

Tony Stone: I met him when we went to their spot to work on songs with Lou Phelps. Shouts to both them brothas, two young geniuses.

Dumix: I met him and his brother around 2013-2014 and they’ve been supporting us ever since. Really pushing us to our full potential

Your Détour: Zayad City EP landed last year. What were the processes behind it?

The EP was just to pave the way for the album that should be coming out this year (maybe not haa!) but yeah, we worked on tracks that we knew wouldn’t be on the album but were still dope to us.

It sounded different to your earlier singles. What changed? Was this the intention?

Adding Tony on the vocals adds a totally different dimension to our music, so yeah it was definitely intentional. We wanted to make something different, something that will set us apart from what people are doing right now.

So Tony wasn’t rapping on your earlier work; he was just doing beats?

Tony Stone: I mostly stuck to production but would always add a few vocals here and there…as of late though it’s been more prominent in our work.

Articles about you say that you’re moving from “producers to real artists.” How do you feel about this?

We agree, I mean we do both, we still produce for other people but when it comes to our own releases, we try to really make full songs etc., not just two-minute instrumentals.

Do you still feel as if you’ve got a lot to learn in the studio?

Not really because we’re three people so it’s really quick for us to work in the studio the only thing is that we would like to work with other people that trust our ideas and just let us dictate how the session should go.

What do you feel it is about your sound that people appreciate?

We make all kinds of music so we suppose that our diversity helps a lot, we would like to find a balance that everybody could appreciate though.

You just dropped another EP now, ZZZ. What’s the story behind it?

We were in the studio one day and started playing songs that we had individually worked on because we were working on our first album set to drop soon and it was something about the vibe of the instrumental “Attention.” It didn’t fit our album so we just said we should make an EP, so we did.

What can you tell us about your debut album?

The sound has once again improved; we’re finally getting a good grip on how to make records so it should be interesting. Tony stone is on the majority of the tracks we’re trying to make it less of an instrumental album, if possible.