If he followed in his mother’s footsteps, 24-year-old Los Angeles house producer Sage Caswell might […] 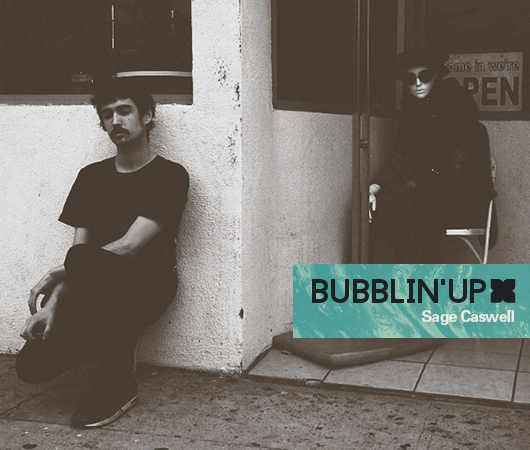 If he followed in his mother’s footsteps, 24-year-old Los Angeles house producer Sage Caswell might […]

If he followed in his mother’s footsteps, 24-year-old Los Angeles house producer Sage Caswell might never have made it out of the San Fernando Valley. Not that there’s anything wrong with the suburbs—it’s just that much harder for an artist to carve out a career in dance music when they’re removed from the city. Making an impact often requires being in the midst of things, at least to start.

Caswell hadn’t always planned on making dance music. Growing up in Santa Clarita, which sits about 35 miles northwest of downtown LA, he was obsessed with skateboarding, a world his mother, Laura Thornhill, had dominated decades before. A pioneering figure in her own right, Thornhill was one of the first female pro skaters, and was even inducted into the Skateboarding Hall of Fame. “She’s like a 1970s icon,” explains Caswell. “It’s crazy to me. She has photos of her board in the Smithsonian.”

Sharing his mother’s passion, Caswell initially made an impact in the skating world as a director, shooting videos with pro skaters like Stevie Perez and Cyril Jackson, but his budding career path was ultimately derailed by dance music. Like many of today’s up-and-comers, especially in the US, Caswell’s watershed musical moment was seeing Daft Punk in 2007. “A lot of people like to play like the first thing they heard was Robert Hood,” he says. “Respect to people who definitely grew up on the classic upbringing of house and techno, that’s mad tight, but that’s not how it was for me.” Leading up to the concert, he didn’t actually know what to expect, but something drove him to hustle the money and scalp a ticket. After seeing the show, he left the LA Coliseum ecstatic. He was 17, and it’s an experience he speaks about with reverence. “Afterwards, we sat on the roof. It’s 5 a.m. and the sun is kinda coming up, and we’re listening to Daft Punk still. I’m sitting here thinking about all these songs and everything’s going crazy. Ever since then, I was just like, ‘Yo, how do I find more?'”

After that, Caswell’s thirst to learn about dance music quickly overtook his desire to shoot skate films, confounding his family and friends. “I was like, falling in love. It’s like I was falling in love with another girl, and every moment I wasn’t doing the skate thing, I was trying to figure out more [about dance music].” Caswell began to make house and techno tracks under a variety of monikers, emailing them out to his heroes in bundles, and kept on working, even when he never heard back. Simply put, he was excited. “I was making house and techno music at night, but I was a fry cook during the day, making chicken. I was kind of psyched on that. I was making money and working on music.”

Like skating, music also ran in the family. His father Johnny Caswell was a Northern soul singer and pianist whose group, The Crystal Mansion, charted in 1969 with its Decca-released single, “The Thought of Loving You,” and went on to release several more hits. Still, the younger Caswell’s interest in dance music was a tough pill to swallow. “My dad started accusing me of doing drugs, ’cause I would stay up til 4 or 5 a.m. working on a track,” he explains. “He was like, ‘There’s no way anybody is able to sit and listen to the same goddamn thing ’til five in the fucking morning without drugs.'” It didn’t take long for Caswell’s parents to kick him out.

At that point, Caswell was ready to fully dive in and pursue music, but he wasn’t quite sure how to find the door. “It was almost like I was aware of all this stuff happening and I was standing outside of this window just frowning,” he says, describing events like LA’s legendary Droid techno parties, which he was desperate to attend and play. “Being from The Valley, it was almost like something you couldn’t penetrate on your own. I was just this weird kid that nobody knew. No one had really accepted me or let me in.”

Ironically, it was Caswell’s skate-video background that ultimately granted him real access to the LA scene. Thanks to a random invite to work on a music video for Dubbel Dutch in 2010, he met Body High founders Jerome LOL and Samo Sound Boy; Caswell says that the pair “cosigned my existence.” From there, things began to move; following a lengthy period of couch surfing, the Valley boy locked down a solid nine-to-five job in a streetwear warehouse and got his own apartment in LA proper. He holed up in his home studio, amassed tracks, and left the house only to DJ or check out the parties he’d once desperately hoped to attend.

In 2012, Caswell connected with fellow LA producer Cromie, with whom he shared a bill at Hollywood megaclub Avalon, and the two eventually paired up on “Vines” b/w “Pyrex,” the inaugural 12″ from Brooklyn label Peach. The EP sold out quickly, and while the inclusion of remixes from Kyle Hall and Ghosts on Tape undoubtedly had something to do with the record’s success, the 12″ also garnered plenty of accolades for Cromie’s and Caswell’s shimmering, percussive production. The duo has since collaborated on remixes of Newbody’s “Wut U Do” for 100% Silk and Ratcatcher’s “Motion” for Peach; the two producers have also put together a forthcoming split EP for Canadian label Amadeus, which will showcase some of their best work to date.

These days, Caswell weaves through the various crews and cliques that make up LA’s electronic landscape seamlessly, affiliated without clear affiliation. At the same time, he remains something of a contrarian. He’s a Southern California native who refuses to drive, a former skate diehard who still reads Thrasher, and a rising talent who hasn’t forgotten where he came from. In April, French label Decabaret issued his solo debut, the vinyl-only Tribute 2 CC Arthur EP. “That EP is really special to me because it’s an homage to my boy, CC Archer, who passed away. We lost him,” says Caswell. “We do this for our boys. He was a classic dude, he was like the heady music dude in Santa Clarita. This is for him.”

More solo releases are in the works, including a cassette version of his recent contribution to the venerable White Light Mixes series, an ambient mix of entirely original productions. He’s also done a track for a forthcoming Waze & Odyssey project, along with a full EP for Archie Pelago Music. Slowly but surely, it seems that Caswell’s risks have paid off; though he once abandoned his dreams to pursue a new love, he now sits among a new class of promising young LA producers, and even his parents have begun to come around.

“If I had to speak on how they feel, I’d say they’ve always been supportive, but increasingly so these past two years,” he says. “They know I like partying sometimes, but they know I prefer hanging at home, working on music even more.”