Samo Sound Boy loves living in LA, although he can’t quite put his finger on […] 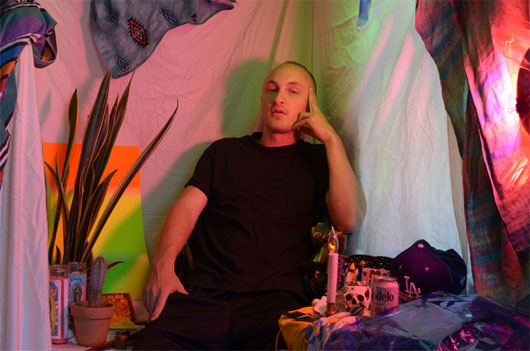 Samo Sound Boy loves living in LA, although he can’t quite put his finger on […]

Samo Sound Boy loves living in LA, although he can’t quite put his finger on what makes the city so special. “It’s really unstructured. It’s wild, and it feels strangely lawless in places.” The 26-year-old DJ and producer born Sam Griesemer doesn’t live in some obscure corner of the city, either, having set up shop in Echo Park, within shouting distance of Elysian Park and Dodger Stadium. “Where I live now, it’s not by any means off the beaten path, it’s right off Sunset. But at the same time, there are coyotes on the street all the time, and my weird neighbor sits outside with a small pistol every night to protect his dogs.”

It may not sound idyllic, but Griesemer—who was born in Manhattan and grew up in New Hampshire—is happy with his adopted home. “It’s all these different neighborhoods that have the mentality of a smaller place, or little towns, but they’re all connected to this larger thing.” He continues, “It’s loose and there’s a lot of space. I think that’s why people find it a good place to be creative. It gives you a little bit more room to do what you want and work with your ideas.” Given the vast nature of the city and the fact that Griesemer only moved there a little more than two years ago, one might wonder exactly how well he could know his adopted hometown. As it turns out, quite well. After moving to LA, he took a job as an emergency tutor for the LA Unified School District, a job that required him to visit and work with students in their homes all over the city. “I was everywhere,” he says. “Up in North Hollywood, down by the airport, all over East LA.” While endless afternoons spent sludging through LA traffic into tucked-away corners of the city might sound like a drag to some, Griesemer cites the job as one of his biggest inspirations. “I just got this weird, self-guided tour of the city, which would have taken so long had I just been working at the same place or doing something more routine.”

That said, Griesemer’s initial experience as a DJ was anything but routine. After growing up listening to “all hip-hop, all the time,” he first acquired a taste for club-oriented music in college at Sarah Lawrence, partially through his work on the school’s radio station and more directly through the Hollertronix- and mash-up-inspired sounds that were popping off at the time. But it wasn’t until he took a year off from school in 2006 and headed to Buenos Aires, Argentina that he first got behind the decks in a club setting. Buenos Aires offered his first taste of actual clubbing, period, and the favorable exchange rate enabled him to explore the city, and its nightlife, in earnest. Pretty quickly, the novelty of club culture, not to mention most places’ predilection for big-room Eurodance sounds, led Griesemer to Fugees 99, a tucked-away spot in the city’s San Telmo neighborhood which he describes as “really, really dark, really cheap, and they played basically reggaeton, dancehall, and West Coast hip-hop classics, like Death Row’s greatest hits.” Eventually, Griesemer became a regular and met DJ Alex, the club’s main weekend resident. “He didn’t really speak any English, and my Spanish never really took off, unfortunately. We’d have some conversations back and forth, talking about music and hip-hop because he was clearly into American hip-hop. I was trying to tell him about having a radio show and that I was a DJ or had some sort of aspirations. I think all he heard was ‘New York,’ ‘DJ,’ ‘hip-hop,’ so he was like, ‘Oh! Come play.'”

Despite his actual lack of prior club experience, Griesemer burned a bunch of CDs, showed up, and played an admittedly “awful” DJ set, yet Alex continued to invite him back. “Basically, he had to DJ all night, and in Buenos Aires, he’s going until 7 a.m., so he’s doing nine hours. So he just didn’t really give a fuck about the first two or three hours. I would do that, and he would just go and smoke weed in the bathroom for two and a half hours with this hilarious rotating cast of his friends, and then, when he was ready, he’d come up insanely blazed and take over, and he would really rock it.” Griesemer observed intently, and began to learn on the fly. Incidentally, around this time he also met Gavin Burnett (a.k.a. Oro11, currently one half of Bersa Discos), who at the time was also living in Buenos Aires, and hosting a weekly Thursday night party at Fugees 99 with people like Villa Diamante and other members of what would eventually become the extended ZZK crew. They were more experimental in focus, mashing up cumbia with dancehall and other electronic sounds. “I would come then and experience that, these guys that were really cutting edge,” Griesemer says, “and then (on Fridays) this guy who was just a really solid, really awesome club DJ.” The effect was profound, and when Griesemer returned to New York, he bought turntables, threw himself into DJing, and eventually began dabbling in production.

The Shuffle Code EP, out now via Trouble & Bass.

After college—and a brief stint living in Seattle—Griesemer moved to Los Angeles, where he began soaking up the city and was inspired by what he refers to as its “weird wildness.” The first real document of this LA-centric inspiration is the Shuffle Code EP (streaming in its entirety here), which recently dropped via the Trouble & Bass label. It’s not his first release for the imprint, which also had him put together an edition of its Heavy Bass Champions of the World series earlier this year, but Shuffle Code is undoubtedly his most realized effort to date. While the title track might grab the headlines with its hyperactive rave synths, thick bassline, and an infectiously pitched-down hip-hop vocal sample that simply says “I’m so high” over and over, the EP’s more relaxed b-side, “Me and You,” is equally impressive with its laid-back, low-rider-on-the-dancefloor vibe. Both songs reflect the unique sonic territory that Samo Sound Boy inhabits, a place that combines a stripped-down take on traditional house music with tropical percussion, inventive drum patterns, and just a touch of G-funk swagger. It’s certainly something different for Trouble & Bass, a label that has largely built its reputation on heavier bass sounds. Griesemer acknowledges that he’s different than the rest of the Trouble & Bass roster—he’s the only West Coast act on the label, for starters—but ultimately feels right at home, stating “the amount of support and the effort they’ve been putting behind my stuff and my ideas—it’s impossible to feel like the odd man out.”

Part of that support was collaborating with Griesemer on the Shuffle Code artwork and the title track’s video, an inventive clip that combines rough-and-tumble sea creatures, elements of Escape from LA, and 16-bit nostalgia. It’s all a bit crazy, but Griesemer says working with animator Myk31 was an incredibly rewarding process. “This was the first time I really collaborated with anyone… It was a big step, because I wrote the idea for the video, and I was getting ready to send it and thought, ‘Is this guy going to think I’m the fucking weirdest dude ever?’ I was like, ‘There has to be a mermaid prostitute,’ and all this specific stuff.” As it turned out, everyone loved the ideas, and the “Shuffle Code” video could very well end up celebrated as one of the year’s best.

Perhaps that is why Griesemer is so excited about his next collaborative effort, a project he’s undertaken with fellow LA transplant Jerome Potter, who is also one half of LOL Boys. The two met shortly after Griesmer moved to Los Angeles, and, after a few false starts, finally sat down to work on some tracks together about four months ago. “I went over to his apartment, and we did a track in, like, three hours. When I work by myself, it’s weeks of the same shit, and listening to it over and over. We were both taken aback by how fun it was, so we kept going.” The end product of these sessions is a five-track EP, which the pair plans to release under the name DJ Dodger Stadium. Yet those expecting something that sounds like Samo Sound Boy or LOL Boys might be surprised, as Griesemer describes the sound as being strongly influenced by “Dance Mania and Chicago records from the early ’90s, and there’s definitely some kind of G-funk LA elements in there, too. It’s a pretty straight house record. Every single track on the EP is 135 bpm, and it’s not really that tropical or anything like that.” Slated for release in October, the EP will be dropping via Griesemer’s and Potter’s newly christened Body High imprint, which already has several additional releases in the works, including efforts from DJ Funeral, Myrryrs, Trophy Heads, and Jim-E Stack.

Conceived as more than just a vehicle to release his own work—the next Samo Sound Boy EP will actually be released once again via Trouble & Bass—Griesemer sees Body High as a chance to document the swelling tide of underground dance music in the US. In recent years, Samo Sound Boy and other like-minded US producers have often been measured against their UK counterparts, a scene which Griesemer acknowledges has had a huge impact on him. “A label like Night Slugs is incredible… the vision and work those guys obviously put into releasing all that quality music, so consistently, [is impressive].” That said, Griesemer sees the game on the American side of the pond as an entirely different situation. “There’s nothing like a Rinse FM. There aren’t these legendary nights that are dedicated to more forward stuff… in the States it’s really this uphill battle to be a forward club-music producer, making this stuff that doesn’t really have an umbrella for people to latch onto.” He continues, “It’s not easy. It’s more abstract, but there are these common ties. That’s part of what we want to try and do with Body High; to work with the stuff that we’re really behind; to put it a little bit more in context; to start drawing the comparisons from one release to another, what’s inspiring them and where they’re coming from; to provide more of a story behind it in hopes of unifying it, pulling it all together, just giving people more of a base to go from.” It’s a lofty goal, but one inspired by his and Potter’s DJ travels around the country over the past year or two, witnessing these tiny pockets around the US where promoters and DJs are trying to move things forward, one party at a time. In Griesemer’s mind, “There’s something going on in the States, and it is really changing and getting better. [Body High] is our piece of the puzzle… We don’t exactly know what we’re doing right now, but people are willing to help, and it’s coming together.”

The DJ Dodger Stadium EP, to be released on October 4 via Body High.