To describe Jami Welch (a.k.a. Seams) as an English producer now residing in Berlin hardly […] 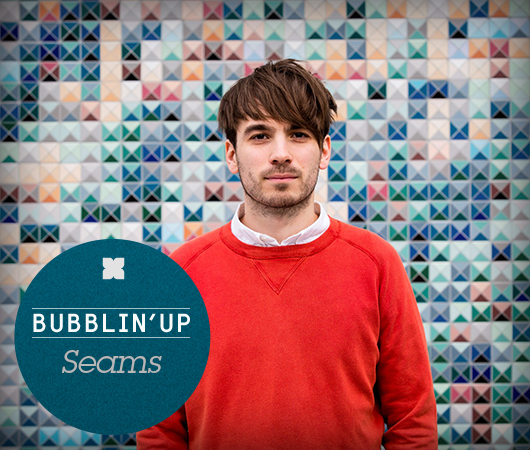 To describe Jami Welch (a.k.a. Seams) as an English producer now residing in Berlin hardly […]

To describe Jami Welch (a.k.a. Seams) as an English producer now residing in Berlin hardly makes him sound that remarkable. Welch’s relationship with the city is, however, slightly different than that of his countrymen who simply have been drawn there by the allure of Berghain and a rich techno heritage. He is, by his own admission, somewhat disconnected from Berlin’s dance music community; while he acknowledges the influence of club music, his roots lie in guitar bands and the more headphone-centric end of the electronic spectrum. This vantage point as a semi-outsider manifests itself in his music too. Stylistically, his most obvious contemporaries are probably artists like Gold Panda and Jon Hopkins—electronic producers whose music is rooted in sprawling, cinematic structures as much as it is the dancefloor-ready tones of house and techno. Though his productions certainly share stylistic characteristics with the robust strains of electronic music that one generally associates with Berlin, they nonetheless seem to exist in a realm removed from the city’s club culture. That said, the German capital still has an integral presence within Welch’s music; in fact, it’s the conceptual cornerstone of his debut album, Quarters, which loosely takes its name and inspiration from having been written and recorded across four different locations around Berlin.

Welch’s first experience with the city came three years ago, when he spent a summer interning at SoundCloud while he was still at university. “I fell in love with the place and recorded [the first Seams EP] Tourist during that time,” he says. “That was made heavily using field recordings and lots of outdoors, summertime kind of stuff. Having never really lived in a city as an adult—I studied in Birmingham [in the UK], but it didn’t really have that same thing—I really fell in love with being in a place where things are always going on, but you can also take life at its own pace. It’s a nice in-between from London and the middle of nowhere.”

That EP would prove to be the first in a string of releases from Welch that are inherently tied to the locations in which they were composed. Following his summer in Berlin, Welch returned to Birmingham to finish a degree in sound engineering, before retreating, somewhat begrudgingly, to his small hometown in Hampshire. It was there that he recorded and released his second EP, 2011’s Sleeper. (For the record, there was one Seams release between the two EPs, the two-track “Focus Energy” b/w “Motive Order” for the Pictures Music imprint.) Sleeper was a notably insular work, one with an undertone of darkness and isolation that wasn’t really present on his debut EP. Welch attributes these tonal differences to the contrasting environments the two records were recorded in. “I feel like, I guess, depending on the mood that you’re in, you absorb your surroundings and you interact with them differently,” he explains. “By talking about my surroundings, it’s kind of just a proxy for talking about where I’m at myself. The Tourist EP, for me at least, felt very light and airy and open, as I was feeling very exploratory and I was excited and experiencing lots of new stuff. With Sleeper, I was back home in a very small room feeling miserable and a bit stuck, so to me [that EP] feels more claustrophobic.”

This approach of relating an emotional dialogue via a musical response to his surroundings is a constant undercurrent in Welch’s work as Seams. “I think, for me, I’ve always found it hard to have something to say; to find a story or a narrative, a more emotional thing that I was trying to get across,” Welch says. “Something I felt I was always very aware of, and something that I felt translated to music better for me, was a sense of place and surroundings. So I started making stuff that was very field recording-heavy, and each tune I made was about recreating that experience.”

“I think you can lose the magic of music by getting too literal, in terms of lyrical content or emotional stuff,” he continues. “If you hear something and it reminds the listener of a place or an experience of their own, then there’s something there you can communicate with. You can speak in relative terms, by relating comparative experiences to people without being explicit.”

Following the release of Sleeper, Welch returned to Berlin as a full-time employee of SoundCloud and began to approach the prospect of writing an LP. For all the talk of location and environment, however, he’s quick to explain that despite its titular premise, Quarters isn’t as tightly bound to its geographic concept as its predecessors. Although the tone of the album is noticeably lighter than that of his previous EP, which one guesses may be attributed to Welch’s relocation, this time around he consciously detached himself from the idea of responding directly to his environment. “With the album itself, my intention wasn’t to make something that was talking about Berlin, or the different places where I was when I was making it,” he says. “Actually, the thing that made me finally able to make an album was stepping back from the concept. I kind of went back to just making tracks, but at the same time, I ended up moving house three or four times through that process, so it had an effect through osmosis rather than being something that I was super aware of at the time.”

As a result, the four quarters of the LP’s title are essentially rough geographical reference points, with each one representing a shift in Welch’s life as he was composing the piece. Three of these touchstones are different places of residence he moved between following a break-up, while the fourth, which is represented by closing track “TXL,” is the departure lounge at Berlin’s Tegel Airport. “There’s a timeline to it,” he explains, “but the ordering of the album doesn’t go from place to place to place. It’s mixed up, but those were the factors that dictated the changes of scene.”

This move away from the constraints of a central theme seems to be audible within Quarters. While there are certainly shifts in mood across the course of the record, they’re far subtler than the contrasting openness and claustrophobia of Tourist and Sleeper. There’s more of a mixture of light and darkness within each song, and the boundaries between them seem less overtly defined. “One thing that helped,” Welch says, “was striving less for a uniform sound. Before I always felt that for an EP or an album to work it should use the same sounds all the way through, and I was into the concept leading the process. But this time around I went back to being more experimental with how I start a track. It was much more based around longer, jam-like improvised things that I then tidied up, rather than having an idea outright at the beginning. There’s no sampling this time either; it’s more synths and drum machines. I was chasing textures in my head rather than ideas. I wanted it to be a bit more drawn out and minimal in its approach, by chasing more rhythmical stuff rather than trying to convey particular experiences. So I sort of dropped the concept, in my head at least.”

Whether it was a conscious intention of Welch’s or not, Quarters also feels more aligned with the dancefloor than his previous EPs. He remains detached from the club scene, but perhaps an extended period living in one of Europe’s great dance-music capitals has rubbed off on him. Welch’s nights in Berlin’s clubs are admittedly rare, but the experiences have been influential nonetheless. “It always inspires me, when I do go out, to make stuff that does make more sense in a club, or to make my live set more danceable,” he explains. “Occasionally I get out and when I do, dance music makes sense to me. It’s not somewhere where I come from traditionally; I’m more of a guitar-band and headphone-music kind of guy. But every time I do go out, it’s like, ‘Yeah, I get dance music, I see what the fuss is about.'”