There’s something quite beautiful in the simplicity of the mindset of Skudge, a Sweden-based duo […] 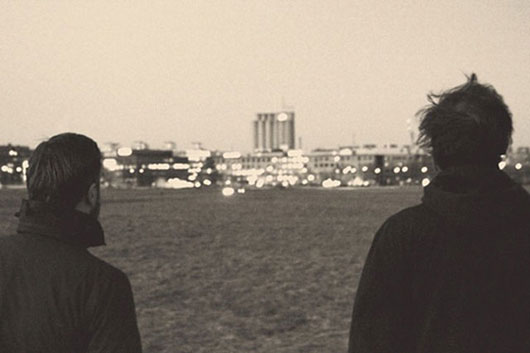 There’s something quite beautiful in the simplicity of the mindset of Skudge, a Sweden-based duo […]

There’s something quite beautiful in the simplicity of the mindset of Skudge, a Sweden-based duo that makes profoundly complex and challenging techno. “We sit in front of the computer and try out different sounds until we find something,” says Elias Landberg, humbly. “In the first process, we think in loops of all the elements, longer and shorter.” His partner Gustaf Wallnerstrom chips in: “We often start with the kick drum. Then it’s about feeling if something is missing. Then we record synths and effects live to bring more life to it.”

Complex life resides within the intricacy of their sound worlds, but its origin is hard to say—perhaps it’s beyond them, as their biography suggests: “Machines do speak a language understood and appreciated by humans,” it reads. Until recently, the machines and their music have done most of the talking for them; the duo has stayed in the shadowed corners of anonymity, allowing the strength of the members’ collective output to shine through. Their analog take on dub-laden techno locks into dense grooves that are stylistically pristine, with weighted detail aimed straight at a solid set of speakers (“We make dancefloor music, absolutely,” Elias states). Besides a flurry of EPs (including 2009’s omnipresent Convolution) and remixes, and an extraordinary debut LP (Phantom, which was released in March), the duo has also invited other scene-straddling artists, like Aardvarck, Jared Wilson, 2562, Marcel Fengler, to re-interpret their productions on a series of Skudge remix 12”s. And there’s the DIY label that’s housed their prolific sprint of music-making since the end of 2009, Skudge Records. They just released the forth remix 12” with Boddika and Substance, with SKUDGE005, “Man on Wire,” soon on the way, Wallnerstrom reveals.

With separate beginnings in electronic music, painter/photographer Landberg stumbled upon rave culture via Sweden’s graffiti scene, while music collector Wallnerstrom entered through “everything from experimental stuff, ’80s Chicago house to German techno.” Concurrently stumbling upon synths and sampling around the same time (“always learning by mistakes,” as Wallnerstrom puts it), a chance meeting through a mutual friend sparked the pair’s sonic experimentation. “Our taste in techno is very similar,” Landberg tells. “In the beginning we tried out a lot of different sounds and inspired each other. Later on it got more intuitive, our way of working.” Wallnerstrom describes their chemistry further: “Elias is more a musician and I’m more a technician or programmer.”

With tightly programmed productions that sound destined for dancefloors in London or Berlin, the duo seems content with keeping its ideas grounded. “We don’t feel connected to a certain sound, and that gives us more freedom,” Landberg admits. “That’s a nice feeling.”

The Man on Wire EP is due out in September.