Bubblin’ Up: The Cyclist 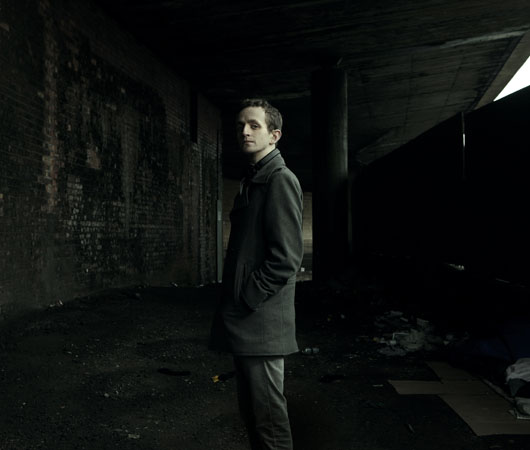 Bubblin’ Up: The Cyclist

The fuzzy tones of overdriven cassette tapes have become a calling card for a certain sect of bedroom producers in recent years, but few can trace their affinity for the sound to such a distinct source as Andrew Morrison (a.k.a. The Cyclist). “[At a certain point,] I had started to listen to a lot of mixes that had been recorded from pirate-radio stations onto cassette,” explains Morrison, who’s currently a second-year pharmacology student based in Liverpool. “Then, when I listened to the actual tracks that were played—the high-quality WAV files—I didn’t like it as much as I did those distorted copies. I loved that sound and it inspired me so much.” Given this, Bones in Motion—The Cyclist’s first proper LP and the inaugural artist-album release for the new Leaving/Stones Throw partnership—makes perfect sense. Across its 15 tracks, Morrison presents his image of house and techno, one filled with the hiss, noise, and distortion which result from oversaturated tape.

At the age of 13 or 14, the Irish-born Morrison began playing around with the four-track cassette recorder his older brother had purchased, and from there, his experiments in production began. Eventually, he started using computer programs as well, bouncing his tape experiments and samples back and forth between cassette and computer, eventually yielding an early body of work that did not make it into the hands of many. “Only my brother ever heard them,” the producer says of almost all of his tracks before 2011. “He is five years older than me, and he would go off to university and I’d tell him I was going to come up with an hour-long piece that would be made from whatever noises I could find around the house,” explains Morrison. “And I’d just try to make it as interesting and sprawling as possible.”

Citing classic Chicago house and recordings of the city’s legendary WBMX radio station as a major influence, Morrison began working on what would eventually become The Cyclist project. On a whim, he sent off demos to a few labels and blogs, including Matthewdavid’s Leaving imprint and the Altered Zones-contributing Get off the Coast blog (now operating as Decoder), whose affiliated tape label, Crash Symbols, got back to him just a bit sooner and quietly issued The Cyclist’s first release a few months later, the Bending Brass cassette. The 2011 release provided an initial glimpse into Morrison’s refracted dance-music creations, one that was ultimately a bit more experimental than his album that would follow, but was still very much marked by the broken fuzz of hazy, tape-processed textures.

After Bending Brass‘ release, Morrison began working on what would become Bones in Motion, his recent LP for the LA-based Leaving imprint. Although many of the samples buried in the record’s adventurous tracks had existed on tapes and in hard drives for years, the process of working on the album took around a year, with Morrison mostly finding time to work on music late at night after having attended to everything else being a pharmacology student requires. “I usually work in the evening and at night,” tells Morrison. “There are times when I’ve come home drunk and woken up the next day to a very oddly named track on the computer that sounds quite interesting.” He says his process has not changed much since the days of his earlier experiments, with the elements of his songs constantly bouncing between tape and Ableton Live, though he now has two four-track tape machines at his disposal. “I never had much equipment, but I’ve used it the best I could,” he says somewhat proudly before pointing out, “I have more four tracks than I have drum machines, samplers, or FX.”

According to Morrison, the order the tracks appear on Bones in Motion is largely the order he finished making them (with the exception of “Sleeping,” a song he says he put together at the age of 15). The record is largely split into two sections, its first half exploring more vibrant and melodious productions—although they’re still imbued with heavy doses of fuzzy tape processing—while the record’s latter half dives into more brooding territory. “I wanted to have a positive, more dreamy side to the first half of the album, and then shift it into darker elements as the record went on,” explains Morrison, “Sort of a day-and-night thing.” The bright chords and harmonious vocal chops of songs like “Mangel” and the spacey, Lone-reminiscent “Makeshift” appear early on, representing the LP’s more inviting offerings, while tracks like “The March,” “Dusty,” and “Visions” (which first appeared as the standout track on Leaving’s Dual Form compilation) provide the darker balance, letting the masses of distortion and disintegrated textures take over as forceful drums and metallic percussion push below.

Until recently, The Cyclist has been only a recording project, but with the release of Bones in Motion, Morrison has begun to take his productions into the live arena. Last month, he briefly toured the UK with Matthewdavid and Diva, and seems pleased with his first run of shows. While the lumpy textures and experimental tendencies of his work may not make it the most club-friendly fare, Morrison thinks audiences have gotten it so far, and he’s encouraged to continue molding his live set. “I just like the idea of people being able to sit down and get in a head space, or even fall asleep to my music, but also to be able to dance like crazy to it if they’d like.”

Looking ahead, The Cyclist has a 12″ for the Spanish Apnea label due sometime in July or August, but has no more concrete releases set beyond that, though Morrison says he has plenty of completed productions in his arsenal and would eventually like to put out more music with Leaving. Since the making of Bones in Motion, he says he’s finally bought a proper microphone (before, he was only using a guitar tuner that happened to have a mic attached to it) for his real-world sampling, and has started using more outboard FX in his process, mainly a new tape-echo unit which has made its way into much of his more recent work. “I think it’s pretty different,” Morrison says of the tracks he’s made since completing his debut LP. “It’s still pretty dancey and housey, but I’m coming up with more of a distorted reverb, tape-echo-swashed sound that I hope should be interesting.” At this point, it seems rather likely that it will be.