Bubblin’ Up: Tropic of Cancer

It’s darkness that comes most naturally to Camella Lobo—from a musical standpoint, at least. Her […] 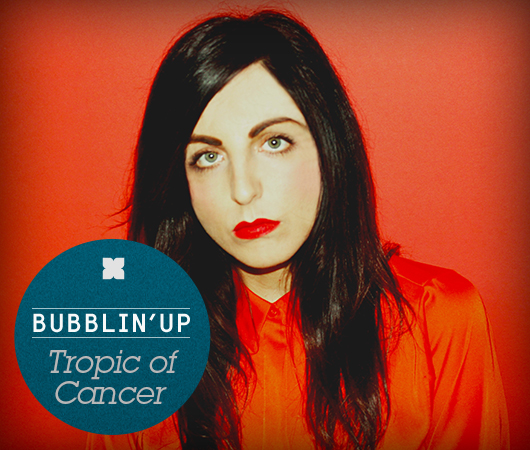 Bubblin’ Up: Tropic of Cancer

It’s darkness that comes most naturally to Camella Lobo—from a musical standpoint, at least. Her […]

It’s darkness that comes most naturally to Camella Lobo—from a musical standpoint, at least. Her bleak, enigmatic sounds as Tropic of Cancer are quite a contrast to the cheerful, candid person who spoke with XLR8R over the phone, accompanied by an audibly mewing cat. The LA-based musician says she’s had a lifelong fascination with the dark side of Hollywood history, and the associated idea that “the brighter the light, the darker the shadow.” It’s a passion that has been brought to bear on her project’s first full-length, Restless Idylls, a mix of dreamy, gothic melody and moody ambience with an undertow that’s hard not to get swept up in.

Tropic of Cancer began in 2007 as a casual recording collaboration between Lobo and her husband Juan Mendez, who records as Silent Servant and has also been a part of shadowy, widely respected techno collective Sandwell District. Their first release together was the 2009 10-inch “The Dull Age” b/w “Victims” on Downwards, which offered a pair of hazy, slow-burning, Suicide-esque tracks with Lobo’s distant, gravely intoned vocals coloring between the blackened lines. The pair’s early releases for Downwards (which have been collected on a CD compilation called The End of All Things) have a ticking and enticing paranoia to them, and present a fascinating point of comparison versus Lobo’s current work, in which her voice is much more present, even as the lyrics remain inscrutable. Some of these older tracks were creepily rumbling and techno-influenced, while “Awake,” on the other hand, was a lo-fi, quietly beautiful track reminiscent of a more subdued The Jesus and Mary Chain.

Lobo and Mendez went on to release a single, “Be Brave,” via Downwards and a 12-inch EP, The Sorrow of Two Blooms, via Blackest Ever Black, and also played a number of live sets (including a West Coast stint opening for HTRK) before Mendez eventually decided to leave the band in late 2011. As Lobo explains, Tropic of Cancer was getting asked to play a lot of shows and was becoming too much of a time commitment alongside his existing projects. Plus, their musical working dynamic wasn’t ideal. “We just had distinctly different views on how things should sound,” she explains. They also felt a bit of disjunction in the live setting, as she recollects with a laugh: “[Juan’s] live performance style is much more ‘improv’—he’ll freak out and do stuff, while I’m a lot more structured. I’m not so good at improvising and doing things on the spot… he would be like, ‘Just do something!’ and I was like, ‘No… I want to know exactly what I’m doing, and I want to know when!'” When Tropic of Cancer was asked to do some additional dates with HTRK in Europe, Lobo brought in Taylor Burch of DVA Damas, for whom she had previously played live synths. Burch has remained in the live band since, and takes on guitars for most songs, while Lobo sings and plays synths.

Tropic of Cancer became an altered two-piece live, but remained solo as a recording project—2012’s Permissions of Love EP for Mannequin was the first release on which Lobo worked mostly by herself, with only some post-production help from Mendez. The descent into a slower, more disorienting mode on this record and her I Feel Nothing 12-inch for Sleeperhold Publications has been taken in a new, more majestically produced direction with the Restless Idylls full-length, which she recorded in early 2013 and was just released via

Making an album was a leap Lobo had been somewhat reluctant to take, but with encouragement from Mendez, her old friend Regis (a.k.a. Karl O’Connor, a Sandwell District co-founder and the co-head of Downwards), and Blackest Ever Black’s Kiran Sande, she decided to take on the challenge. Restless Idylls was composed and tracked in her home studio, and began with Lobo taking stock of existing material and penning some new tunes. “I did a bit of inventorying of all the things I had made over the past few years, and got some new instruments,” she explains. “For the first time, I had a really nice, proper synth: a Roland GAIA. I’m a big fan of low-end sounds, and that synth has this really crazy low-end setting.” In addition to this synth, the album shows Lobo making use of fewer software instruments than she did on earlier EPs like Permissions of Love and I Feel Nothing. “I like the feel of analog instruments a lot more,” she explains. “It just feels more real, more concrete.”

Lobo also got Regis on board as a producer early on, after she had a few songs ready to go. O’Connor had previously expressed interest in being involved in the LP project, and in what turned out to be a thematically foreshadowing trip, he visited Los Angeles in early 2013. As she had long ago promised to do, Lobo took O’Connor on the Scott Michaels-led “Dearly Departed” tour of Hollywood—a Hollywood Babylon-esque look at the grimy, often showbiz-related crime-history tour of the city.

“I’ve always had this fascination with crime, murder, homicides, and horror movies,” explains Lobo. “My dad was a homicide detective for a long time, and a police officer too, and my mom is super obsessed with Hitchcock… I think this is just part of my DNA.” It’s a fascination she and O’Connor share; the two even made a lunch outing to El Coyote, the last place Sharon Tate ate before being murdered by the Manson Family. Although it’s something the two apparently never discussed outright, Lobo feels like this shadowy corner of American cultural history informed the project in certain ways—not so much in terms of lyrics or subject matter, but rather the underlying feelings of dread and loss one can hear in the production and instrumentation.

Following O’Connor’s departure from LA, the two worked together on the album via the internet, with O’Connor in the producer role. He also added some important instrumental elements to the LP, including, says Lobo, the eerie piano part in the background of “The Seasons Won’t Change and Neither Will You” and the trebly synth parts throughout the record that serve as a counterpoint to its rumbling low-end. “He really brought the iciness up in the mix—it made the tracks more balanced, and added an element of heartbreak.”

The album version of “More Alone,” which appeared on a 7-inch single earlier this year via Blackest Ever Black, is one of the most memorable tracks on the record. Lobo’s mournful vocals carry a stirring melody that brings to mind This Mortal Coil in its crumbling majesty. Some of the most affecting tracks on the album have a more indefinite, ambient aura to them, such as opener “Plant Lilies at My Head.” Although Lobo thought of it as her “Jacques Cousteau song” for its underwater-like feeling, from a listener standpoint, it sounds like there’s more of a Gavin Bryars “Sinking of the Titanic” thing going on.

In the end, Mendez actually did end up contributing to this Tropic of Cancer record—as a visual artist. He provided art direction and what Lobo describes as the “hi-fi colors” of the cover artwork, which depicts a candelabra, purchased from a shop in Hollywood, with a hand creepily reaching out toward it. The image helps round out the light/shadow feeling Lobo was going for, giving the album’s deep sadness a bright, if eerie, counterpoint.

Figuring out how to build and realize her music on her own has, Lobo says, been “tough in a lot of ways, but also really fun and inspiring.” She’s forged a new and intriguing sound with Restless Idylls, and relentlessly heavy as it may be, the heartbroken (and those who generally connect with the darker side of pop and techno) might find refuge and inspiration in the oddly shaped ambience within.