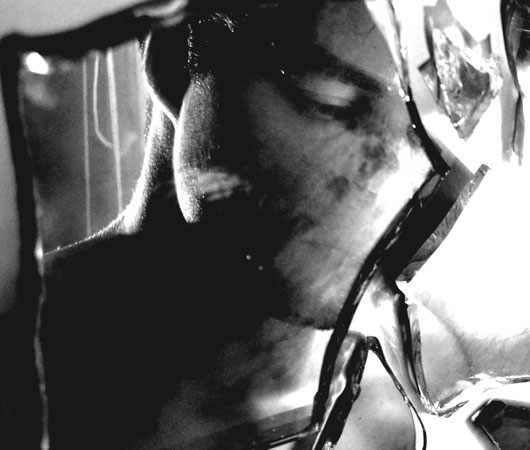 Late last month, a young Bristolian named Sebastian Gainsborough released an excellent LP, Order of Noise, under the name Vessel. It’s a remarkably unique record marked by metallic clatter, chunky basslines, banks of prickly synth tones, fizzing atmospheres, and the muffled moans of phantoms, sounds which Gainsborough crafted by hand and arranged within drifting and dubwise techno structures. Order of Noise is arguably one of the strongest debut albums released this year, and, to hear it from the producer himself, the ingenuity exhibited therein can all be boiled down to his inborn urge to create sound.

“To me, noise represents something that communicates through our entire sensory and imaginary apparatus, and tends to create a fantastical soup of sensations and feelings,” says Gainsborough via email. He’s been asked to elaborate on his use of the word “noise” in his new album’s title, and explain its significance to him as an artist. “Noise is a loaded term,” he speculates. “People are still arguing over how to define it; whether it’s positive or negative, whether it is meaningless or meaningful, an attracting force or an alienating one, and so on. It’s a challenging term, and it means all sorts of things to different people.” For the 22-year-old’s musical work, however, noise is also synonymous with possibility, the endless tangents and visceral experiences that can be explored through sound. Vessel has been active for over two years now, and it’s all because of his desire to wander these tonal paths. As he explains it, “I wasn’t [initially] interested in creating coherent compositions; the process of creating a sound, listening to it, altering it, listening to it, etc. was the immediate draw. It’s a very instinctive thing for me to do, and is the foundation of my interest in making electronic music.”

When it comes down to it though, conjuring and manipulating sound is as much the framework and the rooftop as it is the foundation of Vessel, a fact that’s evident in every release he’s put his name to. From his first two 12″s for London imprint left_blank to the Wax Dance EP for A Future Without to his debut LP for of-the-moment electronic outpost Tri Angle, Vessel’s identity has always been defined by the gritty and metaphysical aesthetic he applies to his mangled techno hybrids. Early tracks like “Blowback” or the outstanding “Standard” are equal parts slow-motion dance grooves and planes of altered consciousness, each element implicitly relying on the other’s strengths to thrive. Much of the same still exists on Order of Noise, but Gainsborough has undoubtedly taken it to a new realm. “I think if you played [my album] and my previous releases side by side, you would hear similarities in terms of the processing of sound material and perhaps a tendency toward structural decomposition, but not much else,” he says. “The album was made in a completely different way.”

And the differences show. Whereas Vessel’s earlier productions boast loftier tempos and meaty beats, Order of Noise subsists largely on the spaciousness of dub music and is permeated by a lilting, ghostly aura. Songs like “Stillborn Dub” and “Aries” rattle and throb with a slow, meditative pace, while the more hurried shuffle of “Court of Lions” or the manic churn of “Scarletta” evoke a sinister edge. This shift of focus came about when Gainsborough was approached by Tri Angle label head Robin Carolan, who asked him specifically for an LP of material. “As I’d had no intention of making an album prior to being asked by Robin, I had no concept in place, no substantial theme to start the process,” the producer admits. “That was both a blessing and a curse. It was really fascinating to just immerse myself in the process in real time, day by day just making music without being beholden to any predetermined structures.” However, the experience wasn’t without its downsides. “In retrospect, [Order of Noise] was made in a completely draining state of hyper-awareness and self-exploration, only gaining a discernable form and character right towards the end.”

His process sounds something like what Darren Cunningham (a.k.a. Actress) underwent when creating his excellent R.I.P. album; the music is comparable, too, but Vessel has unquestionably found his own niche. Techno, dub, and proper electro are primary touchstones for Gainsborough, but his interests run well outside of the electronic-music world. “Vessel is a bit of a sinkhole in terms of cultural appropriation,” he shares before going on to name painter Hieronymus Bosch, writer Marilynne Robinson, French intellectual Jacques Attali, and Sonic Youth as inspirations. It seems like an unlikely list from a producer living in one of the UK’s bass-music capitals, but as Gainsborough puts it, “Living in Bristol has certainly influenced my music, but not directly.” He elaborates, “A person’s environment will shape their focus and interests, regardless of whether they actively engage with it as a cultural space.”

Maybe his ambivalence towards Bristol’s music scene stems from his opinion of its general output. “Electronic music—dance music, specifically—tends to be fairly homogenous,” Vessel argues. “Genres flock together, and there’s little in the way of confrontation or dialogue with audiences beyond the well-worn theme of collective euphoria.” In spite of this (or maybe because it), Gainsborough has carved out a corner of Bristol for himself with his Young Echo collective, a small group of artists—comprising El Kid, Kahn, Jabu/Zhou, and Vessel—who work together on music, events, podcasts, and more. “When we play together, there’s something of a freeform, instinctive, sometimes confrontational approach to the selections we make,” Gainsborough gushes. “I think we feel it’s a certain sense of unpredictability we bring, [something] that contrived dance scenes tend to lack.”

But like he said before, Vessel’s location and scene are secondary to the hauntingly unnatural sounds he creates. While listening through his new 12-track record, a question repeatedly bubbles to the surface: Where exactly do these noises come from? The artist explains, “I get my source material from anywhere that I can, although I don’t use samples.” It might be hard to believe at first, but a close inspection of Gainsborough’s work reveals both a singular, impeccably curated sonic pallette and a high level of clarity, the latter of which is especially uncommon for sample-based music. Unwittingly proving his claim further, the producer makes it seem that crafting tunes is almost just an excuse for him to make some noise. “The process of source sound preparation and development for the album was perhaps the most fun,” he shares. “I spent maybe 10 days utilizing everything available to me in order to collect material. Software, hardware, coding, circuit stuff, recording… That was the only time I was creating any raw junk. From then on, the songs just ate themselves.”

Thankfully, songcraft and a narrative arc also drives Order of Noise, and, for that matter, Vessel’s sonic identity. Without it, the music wouldn’t resonate with his audience like it does, and the producer is well aware of that. “That was the most important thing to me,” Gainsborough says about making his LP, “To be able to create something that was self-reflective, challenging, and narrative-based, a body of work that’s inter-referential and coherent as a whole.” What exactly that narrative is isn’t entirely clear, but that doesn’t really matter. The realization of Vessel’s ideas sound nonetheless imbued with raw physicality and a palpable sense of the unknown. It all comes off as downright magical and mystic, but for the music’s creator, it’s entirely personal. “An act of creativity for me is a rendering of the artists’ imagination and the subconscious into something tangible,” Vessel explains. “It’s a reflection of a person’s state, filtered through culture, experience, and the emotional and sensory apparatus.”