London producer Visionist (a.k.a. Louis Carnell) is a confident artist, but he’s also not afraid […] 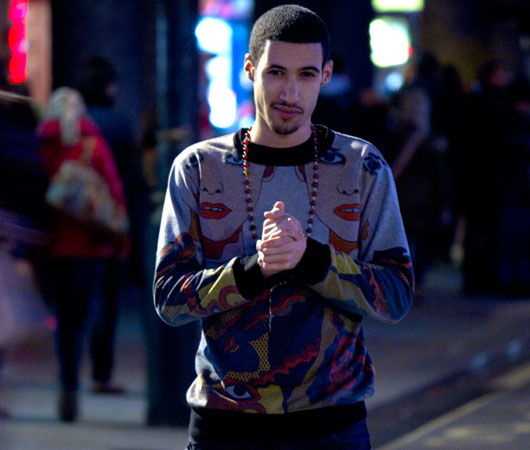 London producer Visionist (a.k.a. Louis Carnell) is a confident artist, but he’s also not afraid […]

London producer Visionist (a.k.a. Louis Carnell) is a confident artist, but he’s also not afraid to give credit where it’s due. “I can’t lie,” says the 22-year-old beatmaker. “I’m heavily influenced. I’ll hear someone’s tune and [think], ‘This is amazing.’ And then, I’ll make something, but I’m very aware of not copying anyone.” He continues, “As much I get influenced by someone’s tune, my production style is, like, ‘You love that vibe, now do something with it.'” It’s a refreshing attitude, and one that perhaps explains how the admittedly shape-shifting artist has swiftly managed to carve out his own corner in the crowded bass-music landscape.

Growing up in the British capital, Carnell cites his preteen discovery of So Solid Crew as a major turning point, something that eventually led him to dig deeper and delve headlong into the gritty world of grime. Even after moving to Nottingham at age 13, he continued worshipping the sounds of his hometown, to the point where his friends referred to him as the “London boy.” He also completely rejected commercial sounds, particularly those coming from across the pond. “When I did grime, I was really against American music,” he says. Instead, he began MCing and later started producing beats while taking notes from the likes of Dot Rotten, whom Carnell cites as his favorite grime artist. During this time, he was operating under the name KLP (a.k.a. King Louis Productions), an alias that he continued to use even after returning to London for university. Nevertheless, he began to find himself increasingly frustrated by the constant one-upsmanship of the grime scene and its general lack of community, prompting Carnell to start dabbling in other sounds, including funky house and dubstep.

That interest in new styles eventually brought Carnell to a Red Bull Music Academy lecture featuring Pearson Sound and Pangea. Although his previous interest in dubstep was largely focused on tear-out acts like Caspa and Rusko, hearing Pearson Sound play songs like “Wad” and Untold’s “Anaconada” opened his eyes to a new world of possibilities. Around he same time, he also discovered juke after stumbling upon a DJ night where Mark Pritchard and Mike Paradinas were spinning the rapid-fire, percussion-heavy Chicago sound. The flurry of 808 sounds reminded Carnell of his grime days, and reignited his love for vintage drum-machine sounds. Inspired, Carnell once again shifted his style, and Visionist was born.

Carnell may not have been the first producer to experiment within the murky post-dubstep continuum, but he appears to have learned rather quickly. He explains, “I keep getting told that I have my own style, which is nice.” While his songs certainly bear traces of his admitted affinity for “dark, emotional music,” they never sound overworked, perhaps because Carnell claims that most of his tracks are completed in Fruity Loops over the course of about four or five hours. Another key quality is that Visionist’s tunes often contain a generous amount of sonic white space, something that offsets his thunderously clattering rhythms. Again, his production techniques are the driving force here, as Carnell says, “Before, when I made grime, I always started with melodies and did the drums afterwards. Now, I always focus on my drums.” Whittling the idea down to its core, he says, “Drums do a lot.”

It may be a simple philosophy, but it seems as though Carnell knows what he’s talking about. Beginning with releases like last year’s Rock the Flock EP on Diskotopia and the “Mr. 67″ 10” on 92 Points (a label he collaboratively runs with four other producers), his percussion-heavy tunes immediately stood out from the pack. Combined with support from the likes of Rinse FM stalwart Oneman—who will be releasing a new Visionist 12″ on his 502 imprint later this year—the swell of interest around Visionist has only continued to intensify. His DJ bookings have begun to pile up, and the Keysound imprint has also come calling; the label will be putting out an EP of new Visionist material in 2012. He recently dropped a new track on the new Diskotopia Various Artists Volume 1 compilation, and also plans to continue releasing music—both his own and that of others—via 92 Points.

By all accounts, Carnell is going to have himself a pretty busy year, yet that hasn’t stopped the enterprising artist from looking even further ahead. “I like to change names,” he says. “I obviously want to do all this music [as Visionist], but when I’m older, I want to make music for TV. I want to write emotive little segments of music… [for] documentaries or adverts or whatever. That’s, like, the grown-up job.” Given Carnell’s proven ability to delve into new genres and learn on the fly, that plan doesn’t sound so far fetched.