After spending most of December looking at the year gone by, we here at XLR8R […] 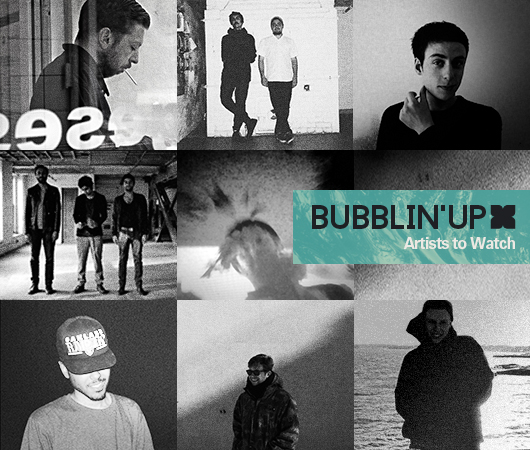 After spending most of December looking at the year gone by, we here at XLR8R […]

After spending most of December looking at the year gone by, we here at XLR8R decided to kick off January by casting our gaze toward the future. That’s what Bubblin’ Up Week is all about, and this year’s edition has already taken in-depth looks at several artists and scenes from around the globe. Still, before we could officially bring the series to a close, we knew that there were still plenty of up-and-coming beatmakers whose potential merited a bit of attention. Given that, we’ve selected 10 artists that we’ll be keeping an eye on in 2014.

Although LA producers Cromie and Sage Caswell are not officially a production pair, we have quickly grown accustomed to seeing their names appear together, mainly due to last year’s collaborative “Vines” b/w “Pyrex” 12″ for Peach, which kicked off the label’s run with two percussion-led tracks that bounced somewhere between tropical dance music and soulful house. In that record’s wake, Cromie is currently readying a solo EP to inaugurate the Rhonda International label (a new endeavor of reputable LA party A Club Called Rhonda, where he is also a resident DJ), while Caswell is prepping solo EPs for Parisian label Decabaret and Urulu’s Amadeus imprint, as well as working on a new project with Brooklyn’s Archie Pelago. On top of all that, we’re told that the pair will be putting out another proper collaborative EP before the year is through. Cromie and Caswell clearly have a prolific 2014 planned—the hard part will be keeping up. Glenn Jackson

Born in India, Connecticut, and Morocco, respectively, Dawn of MIDI‘s Aakaash Israni, Qasim Naqvi, and Amino Belyamani gelled as a musical three-piece after nights of playing friendly tennis matches together. With an upright bass, piano, and percussion—instruments normally used in a classic jazz trio—the Brooklyn-based outfit has honed a proudly repetitive, yet deceivingly complex sound from organic tones by riding simple, motorik grooves in polyrhythmic spirals. On 2013’s Dysnomia LP, the group culled years of improvised live sessions into a hyper-focused package that shares more common ground with minimal techno than jazz. In the live setting, the group’s critically lauded performances mix between cuts like a smooth DJ set, slowly shifting from one piece to the next while the trio remains fully in control of the proceedings. Heading into a run of US and European tour dates, 2014 could be a breakthrough year for Dawn of MIDI. Chris Kokiousis

Fis molds drum & bass into something almost unrecognizable, transmuting the genre’s typically weighty bass fixation into thin, muted whispers of time-stretched breaks. The New Zealand producer garnered some notice for his “DMT Usher” single back in 2012, before he was picked up by forward-thinking outpost Tri Angle for last year’s Preparations EP. That release’s four tracks stunned and beguiled in equal measure with their decaying timbres, mutant stepping rhythms, and an uncanny, skeletal sketchiness. Unapologetically dark, Preparations‘ unsettling atmosphere and seemingly morbid interests made it an oddly perfect fit for Tri Angle, despite the producer coming from a background that’s largely foreign to many of the label’s artists. Even in the context of drum & bass’ resurgence over the past year or so, there’s little question that Fis is exploring some exciting, uncharted territory within its deepest, darkest corners. Tim Gentles

Florian Kupfer seemed to appear out of nowhere last March, when L.I.E.S. dropped the Berlin producer’s debut “Lifetrax” b/w “Feelin'” 12″. The two variants of “Lifetrax” found on the record’s a-side provided swished and spectral techno ambience, but “Feelin'” proved to be an uncommonly brilliant sleeper hit, its melancholic vocal sample and smudged synths capable of worming their way into the psyche. Arguably among last year’s most emotionally resonant releases of any genre, the single pairs woozy, affecting atmosphere with a fairly robust, US garage-inspired swing, making Kupfer perhaps the most promising new artist in the L.I.E.S. stable. His contribution to the label’s year-end Music for Shut-Ins compilation flashed a more cacophonous side of Kupfer, though his recent remix of NYC-based singer/producer James K reconfirmed his talent for manipulating the female voice. Though there’s presently no concrete news about upcoming new releases, it’s safe to say that whatever 2014 brings from Kupfer, it will probably be off-kilter, deep, and beautiful. Tim Gentles

The past year has shown that there’s more to New York’s dance music underground than just the noisy rhythms of L.I.E.S. An alternate direction comes by way of White Material, an imprint that’s sympathetic to the contemporary current of East Coast abrasion, but also offers a more polished New York house sound. Galcher Lustwerk is one of the label’s principal artists, and though he’s only released one EP so far, his mixes and teasers point to a well of talent. Lustwerk’s instrumentation and arrangements point to the sweaty late-night energy of artists like Chez Damier and Jovonn, but his true calling card is his voice. On Tape 22, Lustwerk’s EP debut, he waxes lyrically over his tracks, assuming a drawling, half-rapped cadence that lends his work an emotional depth that would otherwise be absent without the obvious human connection. That record was promising, but even better was his all-originals mix for Blowing Up The Workshop, 100% Galcher, which strongly hinted that the young producer has quite a bit up his sleeve for 2014. Derek Opperman

Not a whole lot is known about the personal details of Miami producer Greg Beato, but his tracks do plenty of speaking on their own. He’s released material on L.I.E.S. (and its Russian Torrent Versions offshoot) and Funkineven’s Apron imprint, and so far, his sound has stuck closely to the aesthetic hallmarks of those two labels, with a pared-down approach that applies the fuzzy filters of low-bit-rate sampling and overdriven channels to the guideposts of dance music’s past. Still, Beato’s music is far from the pure aggression often associated with today’s noise-inclined artists, as his output carries a melodic sweetness that serves to lighten the abrasive edge of his percussive choices. His drum programming is often complex, but a penchant for soulful flourishes helps him get at the breadth and depth of old-school deep house while staying firmly rooted in the present. Derek Opperman

Scuffed and lo-fi, strewn with metaphorical dust and debris-ridden sonics, ‘outsider house’ was everywhere in 2013. One of the jokingly monikered trend’s most interesting, underappreciated figures is Dublin producer Lumigraph, whose Nautically Inclined full-length on Opal Tapes provided plenty of unexpectedly jacking moments among its more cerebral, downcast fare. “Tampa Awaits” is a standout from that release, a song that marries a heavy, stuttering beat to woozy, seasick synths; it’s not exactly primed for the dancefloor—tape hiss covers practically everything on the record—but the track nevertheless makes for heady, immersive listening, and is more rhythmically inventive than most of what passed for house this past year. (It’s worth noting that his other 2013 release—the Yacht Cruiser EP for NYC institution Mister Saturday Night—did look towards the dancefloor a slight bit more.) Lumigraph has the rare gift of being able to close the gap between the more cerebral tendencies of experimental and lo-fi sounds and the basic building blocks of house and techno; his tracks are shambolic in a way that’s endearing rather than put on, and this playful functionality leaves us excited to hear what’s next. Tim Gentles

2013 saw plenty of new names emerge within the resurgent grime scene, but London’s Mssingno may have been the most successful up-and-comer to stake a claim. As the year’s final months came to pass, the UK producer delivered the soaring “Brandy Flip” (which managed to make the dangerously stale formula of pitched-up Brandy vocals and neon-laced synths sound fresh again), turned in productions for heralded grime MC Cas, and dropped a debut solo EP via the fledgling Goon Club Allstars label. Touching down in November, Mssingno’s self-titled outing not only turned heads in grime’s UK strongholds, but also managed to gain steam across the pond, largely on the back of “XE2,” a dizzyingly colorful and melodic slice of instrumental grime peppered with enough re-tuned R. Kelly and Toni Braxton samples to make it an anthem of sorts. At the moment, Mssingno is someone whose personal details are largely unknown, and his plans for 2014 remain unclear, but if the last two months are any indication, whatever the ensuing year brings from Mssingno will almost undoubtedly be worth checking out. Glenn Jackson

After spending a few years crafting more garage-indebted affairs as Drop/Dead, Berlin-by-way-of-London transplant Jay Donaldson spent the end of 2013 exploring the intergalactic ends of Midwest house music under the name Palms Trax. The project’s debut EP, Equation, inaugurated the London-based Lobster Theremin label back in October, eliciting comparisons to the hardware-streaked productions of Legowelt with its combination of space-warped Detroit soul, lightly jacked drum-machine rhythms, and shades of experimental looseness. In 2014, Donaldson appears anxious to build on the momentum of Palms Trax’s debut; a live show is set to premiere later this month, and will be followed by a re-release of the Equation EP in February. A second Palms Trax EP (complete with a remix from Galcher Lustwerk, an artist Donaldson has also remixed in return) is set to appear in March, fitting within the man’s busy schedule, which also sees him helping out with A&R duties for Lobster Theremin, working on separate collaborative projects alongside Belgian producer Innershades and British mainstay Braiden, and serving as a member of the Chicago Flotation Device trio. Glenn Jackson

Though he’s not exactly new to the game, Ratcatcher effectively introduced himself to a whole new set of listeners late last year as a featured producer on Doc Daneeka’s “Walk On In,” a bass-loaded, filter-heavy house tune that we ultimately named as one of our favorite tracks of 2013. The Welshman’s alias may strike some people as odd, but his resume is hard to argue with; long before “Walk On In,” Ratcatcher cut his teeth crafting heavy-handed house and garage workouts as one fourth of C.R.S.T before quietly releasing solo material on Cardiff’s Catapult imprint and making an appearance on the Blind Jack’s Journey series of 12″s. Next month, he’ll be dropping a new solo 12″ via the quietly ascending Peach label; the record will also include remixes from Leon Vynehall, Benjamin Damage, and fellow “Artists to Watch” Cromie & Sage Caswell. With any luck, there will be several more Ratcatcher efforts before the year is through. Glenn Jackson