The series wraps up with quick looks at more producers on the rise. 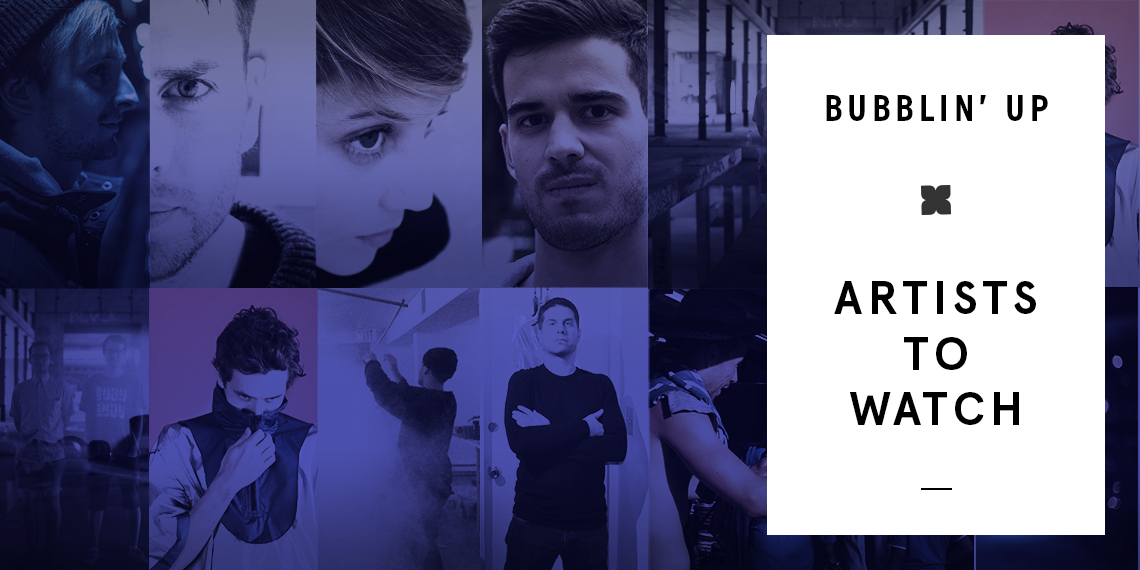 The series wraps up with quick looks at more producers on the rise.

Over the past several days, XLR8R has been taking a look at artists on the brink of making a major splash, and now that Friday has arrived, we’ve come to the conclusion that it would be impossible to provide an in-depth look at every new act we’re excited about. At the same time, we still want to give a handful of these up-and-coming DJs and producers a little bit of extra attention as they head into the new year, so we’ve put together a list of 10 artists to watch. The producers here come from all across the globe and each one has their own unique take on electronic music, but there is one unifying trait tying them together—they’re all worth keeping an eye on in 2015.

Arad
Dara Smith is one half of Lakker, an Irish techno duo that has quietly gone about making a hell of a racket during the last eight years. The outfit has been especially prolific in the 24 months, releasing a string of fuggy, Rephlex-inspired techno for R&S, Stroboscopic Artefacts, and Candela Rising, among others. Now making his debut as Arad, Smith removes some of the smoke-and-mirror effects present in his work alongside Ian McDonnell (who, as Eomac, is already a prolific solo artist). Smith’s first EP, Haon, is scheduled to appear this month via Speedy J’s Electric Deluxe label, and it finds him smoothing out the twitchy, opaque surfaces of his past work. Planting spindly tones and industrial chimes onto lockstep techno and electro frames, the music sounds lean and totemic, carved as it is from raw metal sounds into a chiseled EP that’s been fine-tuned for dark corridors and pitch-black dancefloors. Ray Philp

Community Corporation
Community Corporation is described on his SoundCloud page as being “Dedicated to keeping your Community™ well-managed.” The name is a twist on the anonymous producer spiel; instead of presenting himself as an unknown individual, Taylor Hawkins’ alias takes the guise of a faceless city bureaucracy, which explains why the song titles on his cassette-only album, The Salt Mines, include “Visitor Badge for the Devil,” “108 Dead at City Hall,” and “Pink Slip Walkers.” Thankfully, his music is much more charismatic. It’s spacious, yearning machine music—something squarely between house and techno—with densely arranged synths that swoosh and glide in multiple directions. Besides The Salt Mines, the Detroit producer has also released an EP on the Argot label, which followed a digital-only effort for Crisis Urbana. As with his corporate persona, Hawkins’ music is by turns familiar and evasive (the analog textures are nothing new, but his labyrinthian melodies sound fresh and inspired), and so it feels unburdened by its creator’s geographical proximity to Detroit, and the baggage that sometimes brings. Community Corporation records feel invested in the present, avoiding easy nostalgic motifs while still managing to evoke the twitchy paranoia of an urban landscape that has been the backdrop for some of dance music’s finest moments. Ray Philp

Al Dobson Jr.
He might have debuted in 2013 with an auspicious split 12” on little-known label 22a, but 2014 really announced Al Dobson Jr. to the world. The Peckham-via-Bristol beatsmith emerged with not one, but two highly collectible and sample-heavy albums that loosely muddled hip-hop, funk, Afro, dub, deep house, and smoky soul. The LPs (which surfaced via Rhythm Section International and Kutmah’s IZWID Records) were enthrallingly rugged and lived-in affairs, where tracks and vignettes lasted anywhere from a few seconds up to a couple of minutes. Strung together, these compositions make for a truly intoxicating listening experience, one that seems to be as concerned with hot, scorched African rhythms as it is with cosmic night skies. Gilles Peterson has already showcased Dobson Jr.’s skills at his Worldwide Festival, but with his uniquely muddy textures, humid atmospheres, and lovably frayed edges, it surely won’t be long until the rest of the world catches on to his talent. Kristan J Caryl

Ana Helder
Ana Helder‘s music is a lot like that of her Cómeme labelmates, not just because it’s an improvisational combination of punchy Chicago house and South American rhythms, but because it wears its imperfections lightly, even proudly. Still, on the three EPs the Argentinian producer has released so far on Matias Aguayo’s label (another record, the plainly titled EP, arrived via Astro Lab Recordings), Helder has distinguished herself by taking Cómeme’s irreverent aesthetic and stretching it to breaking point. Helder’s most recent effort, Fiebre de Marte, pares down the mercurial flourishes of her early Cómeme releases and instead shows off a bold post-punk sound that previous EPs only alluded to. On the whole, her records are unfussy and squarely built for the dancefloor, but the way in which Helder toys with familiar house templates—often by assembling sounds and samples that bump and jarr against each other—gives her unpretentious creations a wickedly subversive appeal. Ray Philp

Innershades
Innershades is a keen student of classic Chicago house and Belgian new beat, but with eight 12″s in the last two years, the Belgian producer has proven to be someone who not only absorbs the sounds of those eras, but the work ethic too. After a couple of EPs on Wicked Bass in 2013 (both of which lead off from the Robert Armani end of the Dance Mania spectrum), he came to most people’s attention with “Nina at the Boiler Room”—a sleek chassis of 808 bells, whistles, and toms that typifies his straightforward approach. More recent EPs on Creme Organization (Dark Society) and upstart Dutch imprint Pinkman (Love Park, an EP that edges more towards his new beat-ish Fatal Riot alias) have foregrounded Innershades’ insignia of easy melodies and metal-pounding drums. The prolific producer has started his own label too—and 9300 Records’ first release, featuring an excellent, notched-down Willie Burns remix, has shades of MK and Paul Johnson about it, drawing in something of the ineffable magic that makes those producers’ best moments so memorable. That said, Innershades’ synth-stuffed, jacking house records are typically terse and to-the-point, and are poppy only to the extent that he keeps things simple—a quality his methods share with the best of the formidable Windy City canon. Ray Philp

Phil Moffa
The latest in a long line of New York techno stalwarts, Phil Moffa quietly burst onto the scene in 2012 with “Atlantic Avenue,” a collaboration with Anthony Parasole that was released on Parasole’s own label, The Corner. Parasole and Moffa are clearly partners in crime—they’ve released two records together as well as a handful of remixes—but Moffa’s style is unique, setting him apart from his New York contemporaries. Unlike Parasole’s no-nonsense heavyweight techno or Levon Vincent’s dubby, gritty deep house, Moffa’s productions are airy, spacious, and melodic, possessing an elegance and refinement borne of his long career as a studio engineer. (He runs his own Manhattan-based recording studio, Butcha Sound.) Perhaps what’s most compelling about Moffa’s productions is that they aren’t rooted in homage or revivalism—unlike many of his peers, his sound palette isn’t particularly indebted to Chicago, Detroit, or Berlin. Techno, at its heart, is future music, and Phil Moffa sounds like he’s arrived via a time machine. Chris Zaldua

Ptaki
Ptaki, which translates to “birds” in the duo’s native Polish, is an outfit that describes its output as “sample-based music.” Put another way, one could refer to the pair’s tunes as “disco edits,” but that’s somewhat reductive, since the material Ptaki is mining is virtually unknown outside of Poland. Part of The Very Polish Cut-Outs family, a blog-turned-record label dedicated to reinterpreting Polish classics for the dancefloor, Ptaki’s breakout track is “Krystyna,” a reworked version of Krystyna Prońko’s “Specjalne Okazje” (translation: “Special Occasions”), which takes the sexy, funky groove of the original, combines it with a languid throb, and loops a snippet of the original vocal into an insistent hook. It’s a perfect edit, cherry-picking the best bits of the original and utilizing them for maximum hands-in-the-air dancefloor bliss. The duo’s most recent EP, Kalina, proceeds down a similar path, but it picks up the tempo while placing the Polish source material in a deep house context. With the help of Ptaki and its Cut-Out compatriots, it’s possible that Polish disco will soon be getting the respect it deserves. Chris Zaldua

Project Pablo
These days, Project Pablo (a.k.a. Patrick Holland) is based out of Montreal, but his roots can be traced to Vancouver’s rising dance scene. Co-founding the ASL Singles Club imprint with former LOL Boy Markus Garcia last year, Holland recently shed his former moniker, 8prn, to start fresh as Project Pablo. Since the name change, he’s already issued two scruffy house EPs via Vancouver’s Hybridity label and put together remixes for Natasha Kmeto and fellow Canadian Deebs, all while keeping his label humming with quality releases from artists like Prison Garde, Wolfey, and Sleepyhead. In all likelihood, 2015 will be even more prolific for the young upstart. Chris Kokiousis

Roland Tings
Melbourne producer Roland Tings (a.k.a. Rohan Newman) deals in cosmic house and heavy synth jams, as evidenced by his previous releases on labels like 100% Silk and Australia’s Club Mod imprint (the dance arm of Modular Recordings). It’s no wonder, then, that he linked up with fellow disco enthusiast Prins Thomas to release the Who U Love EP on the Norwegian icon’s Internasjonal label last year. He’s now gearing up for his debut LP, which Thomas’ label will also release on January 26; if all goes well, Roland Tings could become a household name, both among the disco faithful and those who like their dance music blindingly shiny. Chris Kokiousis

White Visitation
White Visitation‘s first release, a track called “Fucking Magic,” arrived as part of a larger compilation issued by Opal Tapes a little over two years ago. The title is not a self-congratulatory pat on the back, but a description of the song’s disfigured arrangement: it sounds like a Marcellus Pittmann record picked apart, mired in looping ambient sounds, and slowed to a crawl. Since then, the Mexico City producer has put out a white-label 12″ on L.I.E.S., an EP for Styles Upon Styles called Ancestors, and a four-tracker on Dog in the Night. (He also has a song on a Blank Slate EP, an Andy Stott-ish trudge called “linthecity”). Most of White Visitation’s songs are smeared with machine oil and smothered in fog, but he does occasionally lift the veil: the shards of Latin music on tracks like “Home” (from the Ancestors EP) and “Detour” (from the Dog in the Night 12″) cut deep into his detail-laden house and techno. But, like everything else in the White Visitation catalog, these tracks are full of muggy, after-dark atmospheres—exactly the sort of environment where this sort of thing is best enjoyed. Ray Philp