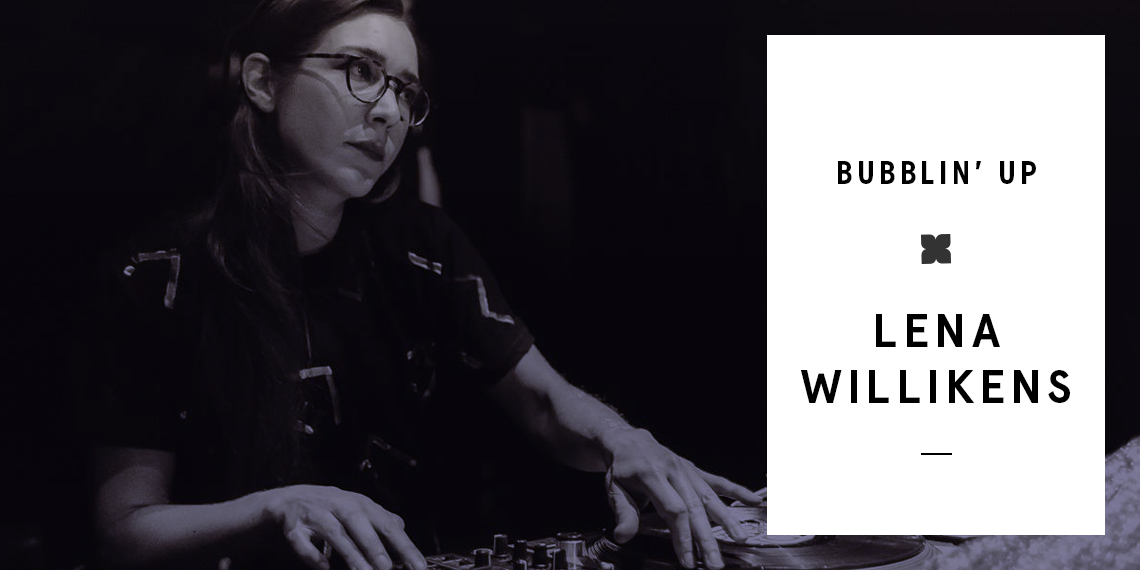 The start of each new year is a time to look ahead, and we here at XLR8R like to get into that spirit by stretching our Bubblin’ Up series across an entire week. Over the next five days, we’ll be showcasing a handful of artists that we think will be making a major impact in 2015.

Lena Willikens is at home in Cologne, seated in a room full of records, smoking. It’s late October, and she’s just returned from a trip to Lisbon, where she played at the city’s Lux nightclub. Better yet, she’s in good spirits, even as she admits to dealing with the final stages of a bout of Portuguese food poisoning. Lisbon was the latest in an increasingly diverse tour schedule for Willikens, who has seen her profile quickly rise alongside an association with Matias Aguayo’s Cómeme organization and a well received Resident Advisor podcast, not to mention the fact that she’s a strikingly unique DJ. While she isn’t down on her most recent show, she describes Lux as “quite posh, and quite hetero, so not 100% my style.” In fairness, her style is rather eclectic, ranging from tensely aggressive post-punk and no wave to quirky cosmic disco, with a smattering of interesting international music sandwiched in between, so it’s no surprise that this sort of mismatched booking has happened to her before. “Sometimes I don’t know if it’s about the eclectic style,” she explains. “Maybe it’s just me playing at the wrong time at the wrong club, standing before the wrong people who really don’t get what I’m doing. I really try not to be cool as a DJ. [My approach is not] ‘I’m just doing my stuff and you have to suffer!'”

Still, Willikens acknowledges that limitation is key to what she does, and while she can move with a crowd, she is very much a “journey” DJ. “I really try always [to see] how far can I go, and of course the farther I can go, the better,” she says. “I think more and more people also enjoy eclectic stuff, that’s just my feeling. There are a lot of people who are sick of sets which are two hours, with the same beat going on, and it’s just like, you know, clean Beatport mixes. It’s awful somehow.” Unsurprisingly, Willikens is a fairly adamant vinyl DJ, occasionally using an effects unit in supplement. “Some clubs are definitely not used to having that many vinyl DJs anymore,” she says. “Some friends of mine stopped playing vinyl—it’s too uncomfortable to carry all that heavy shit around. I like the challenge sometimes, when you are like, ‘Oh no, I packed totally the wrong vinyl and I’m playing peak time.’ I like not having a USB with everything on it. I don’t like to have the records with me where I know they work every time. I don’t want them to get boring for me.” If Willikens sounds exceptionally daring, consider a formative experience she had a few years ago: “I played at the same time as DJ Koze, like playing the small floor and he was playing next to me on the big floor. I played a track that was more or less a hit at that time—but a good one—a summer hit, a lot of DJs used to play it. I can’t remember [what it was] really. And at the break, I heard DJ Koze playing next to me the same track at the same time. Since then, I’ve never touched this record again.”

If a Willikens DJ set is based around spontaneous selections, then Sentimental Flashback, her monthly show that’s part of the Radio Cómeme podcast series, offers a more tempered view of her record collection. Over the past two years, she’s done episodes dedicated to Devo, cosmic disco, Japanese music, and African sounds, as well as a few freeform ones. (At the time of this interview, she was preparing one related to Poland’s Unsound festival, as she played at this year’s edition.) “I need about one day [to prepare each show],” she says. “The longest part is to sit down and really go through all the records, to sort them out and also find an order. It’s really emotional.”

Willikens first connected with the predominantly Latin American Cómeme crew through Christian S., whom she met when she moved to Cologne six or seven years ago. “We started to organize parties together, then I met Matias, and that’s how it came about that I played the first time on a Cómeme night—as a guest first, and then they asked me to do the radio show, and then I became part of the family. [Later on, I was] in Santiago de Chile hanging out with them for three weeks; we were partying together and also playing together at Cómeme nights.” This month, the relationship will bear fruit in the form of Phantom Delia, Willikens’ debut EP and a record that syphons the music she DJs into six stripped-down but serpentine rhythm tracks and creepy wave pieces. Its spare, considered approach differs wildly from Titanoboa, her other project, which will definitely not be releasing on Cómeme. A noise duo in which Willikens plays theremin alongside Melanie Wratil, Titanoboa is more of a live band project, with what she describes as “really intense and apocalyptic” shows. The pair is currently speaking with Ugandabar, a venue in Jerusalem, about a split release with an Israeli band, possibly a half-hour live recording.

Although she’s really only just begun to venture outside of her home country as an artist, Willikens clearly has a knack for forging international connections, and maybe it’s this global focus that helps to keep her sets so interestingly broad. She lists Japan, Belgrade’s Klub 20/44 (which is located on a boat), London’s recently shuttered Plastic People, and Amsterdam’s just-closed Trouw (“it’s a bit posh but it’s something else…”) among her favorite places to play, and she plans to return to Japan in 2015 to tour alongside Chee Shimizu and DJ Chida. She also plans to further expand her network—a Cómeme label tour of North America is also in the works.

[quote]”I like not having a USB with everything on it. I don’t like to have the records with me where I know they work every time. I don’t want them to get boring for me.”[/quote]However, despite all of these new opportunities to showcase her talents abroad, Willikens continues to hold down a DJ residency at Düsseldorf’s Salon Des Amateurs, the place where she began DJing in the first place. “Salon opened 10 years ago, and we were people from the arts academy with no clue about how to run a club or a bar or anything—it was just out of passion, just doing something really anarchic,” she remembers. “After some years, it started to be a bit more professional, but the vibe is still there. We’ve had amazing nights with Jamal Moss, also Theo Parrish, who was playing for less than half of his normal fee. In the beginning, when I was working as a bouncer there, I was influenced [by my surroundings] and I just started to DJ in the club. I’ve been collecting records since, I don’t know, [age] 13 or 14, but I never had the intention to be a DJ. I just started to bring my records in.” Her transition from music lover to DJ was a natural one, and perhaps that’s why her mixes have the special relaxed warmth of someone who’s just playing some of their favorite strange records. In Willikens’ case, it just so happens that she does it exceptionally, viscerally well.