When it comes to the creating the gauzy, otherworldly guitar atmospheres of the shoegaze and […] 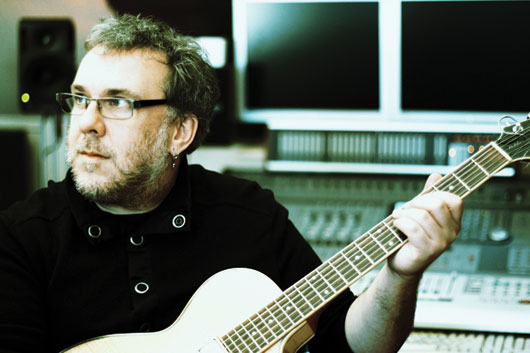 When it comes to the creating the gauzy, otherworldly guitar atmospheres of the shoegaze and […]

When it comes to the creating the gauzy, otherworldly guitar atmospheres of the shoegaze and proto-Brit-pop scenes, Robin Guthrie has probably had his hand in a greater number of iconic records than even Kevin Shields. With a list of production credits a mile long—including records from Chapterhouse, A.R. Kane, Felt, Lush, Medicine, and the Wolfgang Press—and a peerless back catalog of recordings both solo and as a guitarist and producer in the legendary 4AD band Cocteau Twins, Guthrie continues to collaborate and help other bands realize their ethereal, dreamy sounds. About 10 years ago, he decamped to northwestern France for the quiet(er) life: a countryside home/studio near Rennes. We caught up with him in a not-so-quiet moment between production takes.

XLR8R:What type of studio set-up do you have now?
I lived in London for a long time and I owned commercial studios, and Cocteau Twins had some really nice places to work. But I got out of that whole business because my life turned into running studios and not making music. Towards the end of that, I owned three or four big studios and I couldn’t get into any of them. I was going off, at that time, with a little mixer and an ADAT machine in my car and driving off into the country just to get somewhere away from all that to work. And now [living out in the country], it’s come full circle… I have like an old-school take on modern technology… Basically, I’ve got a computer, a digital console, and I don’t use any audio interfaces. The console Firewires into the computer with 32 ins and 32 outs. Then, all my analog equipment interfaces via the console into the signal path. So I use all my favorite analog outboard and everything is hardwired in; I don’t need a patch bay because I’ve got a million channels on this thing. And then I mix down onto the stereo bus on the console and out of that into another computer, which I use effectively for mastering or mixing. So it’s old-school, like using a 24-track and a two-track. There’s no mixing in the box, and there’s absolutely no latency issues because I don’t run through a processor.

Has your approach always been old-school, or was there a time where you were trying out a lot of digital technology and then decided, ‘No, this isn’t for me’?
I was the fucking idiot that bought Sound Tools [Pro Tools’ predecessor]. I paid two and a half thousand fucking pounds for a 500 MB hard disk, when the size of hard disks you could buy were about 20 MB. I was a big early adopter, and a big spender in the late ’80s, early ’90s. Even before I started to do music, I was doing computers, because when I left school I worked for an oil company, and they were teaching me computers in the late ’70s. I always had this computer knowledge and skill, so when the digital stuff came along I just held off until it was good enough. A lot of the 1980s digital recording was very short, staccato sort of sounds, because if they were using samplers, they had a very limited amount of sampling time—really, 8-bit quality. Once they got into streaming onto hard disks and actual audio streaming, that’s when I made the jump over.

Your sound has more or less stayed in a very similar vein throughout, though.
It doesn’t matter what equipment I use, it sounds that way. [When I go to] any studio, I don’t usually bother asking what kind of equipment they’ve got or anything. I’m not really much of a gear slut now. I’ve sort of grew out of that. I was the biggest one in the world, for a long time, but I believe I’ve replaced that gear-slutness with competence and ability. I know that I can make music that sounds like me pretty much anywhere. It’s what you do with the things, not what the things are. It’s where you put the knobs, the order you put things in. Also, the way I tackle the electric guitar as an instrument. I try to not hardly touch the guitar; I’m a very gentle sort of player, and I let the electronics do the work. It’s quite an opposite approach from the vast majority of electric guitar players who bash the hell out of their instrument. It gives me a different type of result.

Was that the case early on for you as well?
No, no, I was a teenage punk rocker early on. But you kind of grow out of that when you stop being a teenager. Early on I had a terrible lack of confidence that I could actually play properly because when I first picked up a guitar, all my friends could play properly, and I couldn’t. I still kinda wanted to be in a band and do something, and just at that time when the whole music scene was sort of turning around with punk rock and things like that. And I pretty much soon found, by me playing my guitar through effects—at that time there was not really a lot of effects out so I was just cannibalizing things and making my own things, and I just started to make this sort of noise that was really just kind of fucking… you know—I sort of just bypassed the having to learn how to play Eagles songs. So I was lucky in that respect, I guess. It was just taking that noise and making it pretty. Music sort of touches me emotionally, or whatever; it makes you tingle and does all sorts of things like that… so making noise that was pretty was very tingly [laughs].

Do you have a philosophy toward recording?
It depends on what I’m doing; I wear so many hats. Basically, when I do my own things, I just don’t really give a fuck. My philosophy about that is very self-centered and selfish, and not the slightest bit about the saleability; it just has to touch me. But I can’t take that view when I’m producing someone else’s record. I have to be in their place, and realize the record that they want to make. And then it’s different again if I’m doing a movie soundtrack, because then I’m helping to tell someone else’s story. The real freedom is when I’m just being Robin Guthrie. Something that I’ve probably been doing for the last 15 or 20 years is traveling a lot and making music; doing location things and just taking myself away with as little equipment as possible: a laptop and some guitar sounds, and get inspired by where I am. That’s like the songwriting, inspirational part of it. I can’t relate to somebody who writes a lyric, but maybe you have to be in a special place to do that. For me, I get influenced by visual things, and by what I read. I must get influenced by music somehow, but I can’t tell how; I don’t listen to a lot of music.

What are some of your favorite environments to work in that are away from the studio?
Amtrak’s pretty good [laughs]. Try crossing a country with a laptop for a few days and you’ll write a lot of music, looking out the window. I go down to the south of France, or Spain, all sorts of different places. The next stage of that is to bring all those things back to my studio here and turn it into what it’s going to be. I write quite a lot of my guitar things on my computer, because if I’m sitting on a train, I’m not gonna sit there on a guitar. I just imagine to myself how it’s going to play; I’m quite good at visualizing music.

What are some of the most important things to remember when processing guitars?
The order that you put your effects in. Also, don’t think that the combined sound of two effects is the same as adding what the two things would be if they were individual. For me, I like to make the effects do the work. I like to build the sound. The choice of guitar is sometime not very [important]; I usually pick up one that’s nice to play or with new strings on it. It’s not necessarily the amplifier or the amp sound or model. It’s really just where you put the knobs and the order you put things in.

“Close My Eyes and Burn”

If you were to place three effects in a signal path, what order would they be in?
Distortion, chorus, and delay are the three obvious ones. You can get some really nice, more unusual effects by putting the chorus or harmonizer after the delay, wobbling the whole thing… just flipping those two.

So experimenting with the placement is key?
Everybody has to find their own thing. I can only give guidelines on how to make a guitar sound like me. I’ve not really managed to make it sound like anybody else yet. Those Little Feat solos are still fucking eluding me! [laughs] I still do not have a lot of confidence in the guitar. I’ve got an absolute horror of turning up at someone’s party and someone saying, “Hey guy, you’re a guitar player! Play us a song!” And I’m like, “No, I’m leaving now.” [laughs] I’m not a great fan of the guitar as an instrument. I’m not very interested in it. I’ve had my moments, and years ago you would’ve gotten a different answer. Now I’m just in that place where I’m kind of less interested in the technicality of the whole thing; I’m much more interested in the emotion—and that’s a terrible way to do a technical interview [laughs], but without these emotional elements to start with, you’ve got fucking nothing. You’re just some guy with a laptop that doesn’t have a fucking girlfriend.

Robin Guthrie’s Carousel is out now on Darla.

For more Building an Iconic Sound, jump to our features with Moby, Squarepusher, Geoff Barrow, Mala, and Einstürzende Neubauten.