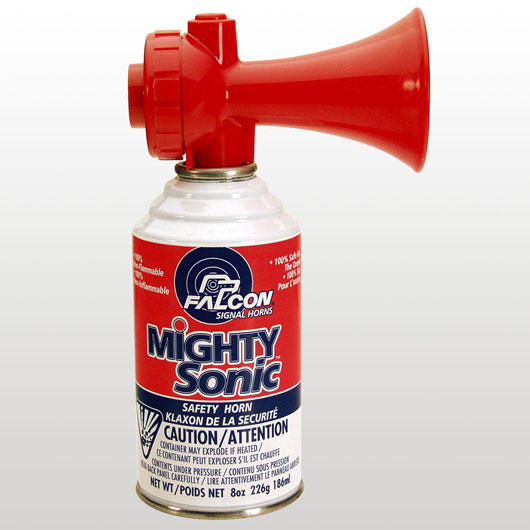 It’s summer. There’s a lot going on, and you’re sure to be out enjoying the night quite a bit. You’re dressed to impress and ready to hit the town. However, you feel like your outfit is lacking. Sure, we’ll still give you some clothing pointers this week, but here, also, are a couple unexpected accessories that are guaranteed to make you the life of the party! After all, is anything more fashionable than being the life of the party?

Battery-Powered Mini Fog Machine
Is a party really a party without a fog machine? It’s 2011 here, people! Answer = NO. Thank god for the Germans. Apparently, when they’re not busy making the most well-engineered automobiles in the world, heavy-ass food, or minimal techno, the fine people of Germany are developing tiny battery-powered fog machines. Now any casual summer dinner party can be kicked into high gear with ease. The Tiny F07 kicks out some serious fogging action. It’s battery powered and comes with a wireless remote. Yes, all this sounds too good to be true to me as well.

Air Horns
Some years ago, my friend and I wound up in the DJ booth at Pacha with Benny Benassi. As strange as it was, I can tell you with a straight face that it was one of the best shows I’ve ever been to. The place was packed with lunatics, and Benassi was spinning nothing but the most progressive pro-ho. I noticed that as tracks built, Benassi would periodically reach up and pull a handle attached to a long chain. This would then blow off the loudest air horn you’ve ever heard. Each time I would look over the edge of the booth to see a crowd of sweaty maniacs—hands in the air, going nuts. With this in mind, I think it’s fair to say that the air horn is the perfect summer accessory. Maybe you’re at a casual afternoon BBQ and you bite into the best hot dog you’ve ever tasted…blow off an air horn. At some house party and the long-haired beardo DJing off his Macbook Pro throws on Sleep’s “Dopesmoker”? Blow off an air horn. Or maybe you’re at the soundclash and while everyone around you flicks lighters, you—being the big dog you are—blow off an air horn. Believe you me, a lot of people aren’t going to appreciate this. Those people hate having a good time.

Zig-Zag Shoes
Zig-Zag shoes have been around forever. I used to buy these way downtown Manhattan from some shoe repair place. I think they used to cost me about $15. Not really sure what happened recently—the company was possibly sold or rebranded. Either way, Zig-Zag is back in a major way with all new colors and materials. They are sort of the perfect crossover for those who want something in between a dress shoe and a sneaker. I wouldn’t recommend wearing them with a suit, but you could probably get away with wearing them with jeans and a tucked in shirt if need be. The red and white colorways are spot on for spring and summer. I also like the suede option as well—a nice way to dress up an old classic.

Anderson’s Woven Belts
I’m not much of a belt guy, as I’m not much of a tucked-in shirt guy. However, there is a world of belts to choose from if they happen to be your thing. As you may have noticed, I’m a huge fan of bright colors. Apparently, Italian belt-maker Anderson’s is with me on that one. Their multicolor woven belts are really where it’s at—like a rainbow blast on your waistband. A powerful summer belt move. Anderson’s also makes a really neat reversible belt that’s cream on one side and tan on the other. It’s a little more pricey, but perhaps you could justify the purchase with the old 2-in-1 logic.