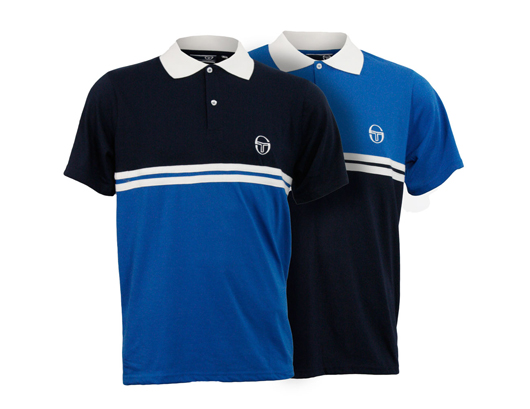 Sergio Tacchini Classics
Last Sunday, I decided to see Hanna. Not a ground-breaking, tween-emo action drama, but entertaining nonetheless. A few things stuck with me after leaving the theater. One of those things was the exquisite styling of the “bad guys.” The lead goon was a German gentleman with bleached-blond hair and man-eyeliner. The first time we see this guy in all his glory is when he steps out of a white Range Rover decked out in a Sergio Tacchini two-piece—white and navy polo with matching shorts. I thought this was a pretty strong look but then later he’s seen gooning about in an Easter-egg-yellow Tacchini tracksuit. BAM! The strongest of looks. Mind you, the two-piece tracksuit is not so much for me, but I have a massive amount of respect for the individual with the guts to pull it off. For the rest of us, Tacchini still makes some pretty cool polos (pictured above)and t-shirts. This website offers a lot of cool stuff. I also recommend checking out the Fila and Ellesse sections.

Nike Sportswear
Last week, New York City got a visit from my favorite foreign friends…Delorean! After they played an amazing sold-out show at Brooklyn Bowl, I decided that spring had officially arrived. Delorean single-handedly shifted the vibes to positive. That said, they arrived wearing a lot of great Nike Sportswear. There’s no question that Nike has got it back together, and this line is the proof. Though it’s a bit pricey, the Destroyer jacket looks perfect and fits accordingly. The Windrunner is an all-time classic, and this season’s colors really pop. Heck, even the hoodies look good. Sportswear is back, and I’m into it. On a Nike side note: I had no clue that they still produced the Presto, but they do. Check them out here.