New Forms‘ line-ups are clearly chosen by heads. The 2014 edition of the Vancouver festival, […] 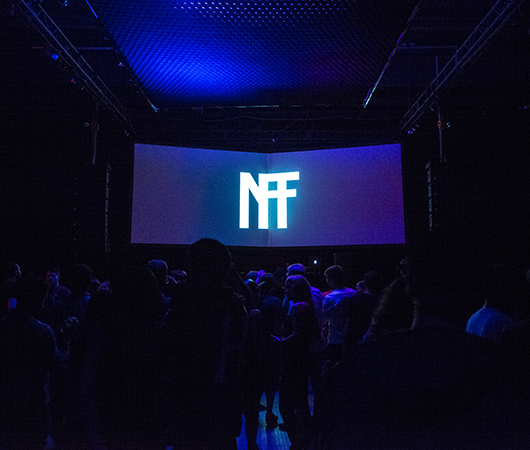 New Forms‘ line-ups are clearly chosen by heads. The 2014 edition of the Vancouver festival, […]

New Forms‘ line-ups are clearly chosen by heads. The 2014 edition of the Vancouver festival, which kicked off last Thursday and continued through the weekend, included an embarrassment of rare and unique acts, several of whom were making their first trips to Canada. Even when headliner Madlib was forced to cancel at the last minute, the festival team was admirably able to find a swift and suitable replacement in the form of Dam-Funk. From representatives of cult Norwegian label Sex Tags Mania to Chicago footwork producer DJ Earl, the festival covered a lot of corners of the current electronic landscape. A large portion of attendees seemed to be locals, but a few did stream in from farther afield. Most of the events took place inside Science World, a museum with a giant dome on top (the dome, with an Omnimax theater inside, is where the audio/visual events were held), which sat in a particularly glittering part of Vancouver. The festival didn’t seem too over-the-top debauched, but people were definitely remarking on the strangeness of a children’s museum being transformed into a makeshift club environment. Irrespective of that, we witnessed a number of impressive performances during our time at New Forms, and have cataloged a few of the weekend’s most memorable moments.

Copeland may want to escape the trappings of her old duo Hype Williams, and she may well have for newer fans—her solo material (in the live setting, especially) is patently different; less populist, much of it is sparse, cutting dub that moves with a broken lurch. On stage, she’s also seemed determined to remove herself from her former act’s theatricality, and this was certainly the case on Thursday night at New Forms. When she did let pop aspects shine through, as on “Advice,” which feels like an existential crisis, or a looping, processed interlude speaking “because you’re worth it,” she was uncomfortably upfront, her personal enervation a palpable contrast to imposingly powerful, skeletal backdrops. The overt theatricality may have dissipated—there was no 10-minute “just blaze” loop—but Hype Williams’ spectre still looms large. Maybe it’s akin to when a comedy actor starts appearing in serious dramas, but as with the solo material of her former partner Dean Blunt, it’s hard not to think of Copeland as tortured since the split.

Young Braised, who also performed on Thursday (in collaboration with his fiancé Soledad Muñoz), was possibly the opposite. Rhyming between two screens, with his image projected onto them (he eventually emerged between them to face the crowd), and with images of his face flashing on televisions scattered throughout the venue, the Vancouver MC’s show was essentially choreographed performance art. To say nothing of the quality of his rhymes (as with someone like Yung Lean, this seems beside the point), Braised kind of feels like someone who just decided to rap on a whim, his onstage persona a confident self-actualization perpetuated by a supportive local scene. (People in Vancouver love him.) “I’m learning so much about art,” a computer with his text-to-speech intoned at one point, before shouting out his parents.

Local producers Lnrdcroy and Cloudface opened Friday night with back-to-back performances emblematic of the supremely chilled current sound of Vancouver. The former began with soothing drones and abstract, bassy ambience before moving into a few more uptempo hits from his excellent debut album, Much Less Normal. This laid the groundwork for Cloudface to present a masterful set, during which he flexed control of both his machines and the dancefloor. Those familiar with the producer’s palette didn’t hear any massive shifts, but his live set, which was already very good to begin with, has improved immensely. He’s continued to hone his woozy sound—his tracks have a deeper shuffle now—and when he took things into spacier territory, he proved to be just as adept.

Helena Hauff is a surgeon and Hieroglyphic Being surprisingly pulled out an iPad.

On Friday night, we overheard two people unrelatedly describe Helena Hauff‘s set as “surgical,” as in she punished the crowd with surgical precision. Backed by dim red lighting that accentuated her music’s somewhat seedy vibe, The Golden Pudel resident’s assault started lightheartedly enough, but she quickly got down to business with a sparse, aggressive, and focused selection of acid house, electro, techno, and assorted crusty tracks that had bodies in full workout mode. It’s crazy to think about the regularity with which she plays this stuff, and how smooth she is without sacrificing any intensity.

On the same floor a bit later, Hieroglyphic Being delivered a similarly aggressive set, and garnered a similar response. His was appropriately more psychedelic though, pairing EBM, industrial, house, and some very crazy rhythm tracks, and featured a selection of gear highlighted by, perhaps oddly for a producer who has been so notably lo-fi for so long, an iPad.

Arca‘s collaboration with DJ Total Freedom and videographer Jesse Kanda, which took place in the Omnimax domed theater on Saturday evening, was stunning. The visuals explored kinetic bodies—some 3-D modeled, some in hi-def, others in grainy lo-def—including an obese couple in a swimming pool, a line of exuberant dancers flanked by morose-looking security guards, and a woman gyrating in a G-string spliced with a tropical beachside drive. The music, which was something between a live and DJ set (like many of New Forms’ performances, actually), incorporated parts of rap hits—Nicki Minaj was touched on, for instance—with a range of abstract but totally corporeal patterns, one a blast of distorted bass that literally shook the theater. Working together, the three artists managed to engage the body during a seated performance, which was a nice preparation for the night to come. They were followed by Oneohtrix Point Never (who mostly drew from last year’s R Plus Seven) and videographer Nate Boyce, but the show felt a little disorganized in comparison. Nevertheless, Boyce’s eerie rooms and oblique sculptures were extremely impressive.

Dresvn stole the show on a very good night.

The highlight of Saturday night, and perhaps the entire festival, was Dresvn, the combination of Dynamo Dreesen and SVN. After sneaking in a test run in between both members’ respective DJ sets, their live performance took place on a host of strange and obscure gear, with tape spools running the entire time. Phaser hypnosis set in pretty quickly, and the two playfully shifted through several shades of their low-slung, tightly wound, minimal sound. Basically, and one assumes this is because of their idiosyncratic gear, Dresvn sounded great, opulent, and full of cushion and nuance. It was a dream to dance to. Up on the second floor later that night, Scratcha DVA‘s first 15 minutes or so were beatless, purple ambience. He was followed by Chicago’s DJ Earl, who offered a high-intensity selection of footwork and compatible styles, and given that people were begging for more at the end, it’s safe to say that his set was thoroughly successful.

The brothers who run Sex Tags Mania went in for seven or so hours on Sunday afternoon and evening, dropping all kind of genres inside Creekside Park, a sunny spot on the water, with the skyline and mountains in the background. A notable highlight was one African woodwind track that pretty visibly made everyone in the vicinity shut up, but they also played jazz and breaks and, of course, a lot of eccentric house. It was on point, the best festival finale one could hope for.

It may seem obvious, but on the whole, there is no way that this year’s New Forms was anything but a complete success. A couple of slightly negative points: door searches were a little invasive, and most artists did not have visual accompaniment (the visual series Wallpapers could have probably been playing in the rooms, rather than in the hall). The sound was generally nice, though artists like Cloudface and Dresvn sounded particularly good, thanks to the quality of their machines. Crowds were a very reasonable size, people were friendly, and Vancouver legitimately feels like it’s in the midst of a renaissance. People constantly seem to be founding festivals similar to New Forms, but it stands out as surely one of the best in North America, if not the world. Hopefully it remains as casually futuristic as it was in 2014.