Components: This month’s wrap-up in the best of gaming 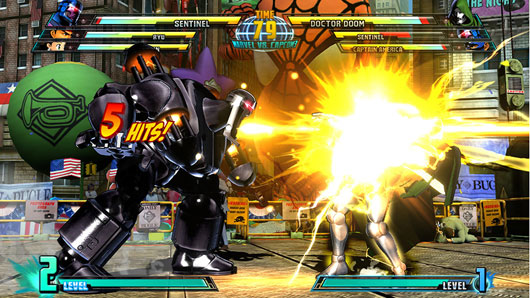 Components: This month’s wrap-up in the best of gaming

Marvel vs. Capcom 3
Capcom; X360, PS3
While the rest of the world waits for Captain America, Thor, and Iron Man to finally get their shit together on screen, you, my main man, need not wait a minute longer! Marvel vs. Capcom 3 allows not only for Earth’s Mightiest Heroes to assemble right before your eyes, but also some X-Men, a couple of zombie enthusiasts, some robots, a busty demon hunter, and a dog. All told, you can mix and match a team of three out nearly 40 far-out characters from both Marvel’s and Capcom’s respective histories in a bid to overcome Galactus, the world-devouring demigod. Epic story aside, MvC3 is, above all, a pixel pugilist’s paradise with as deep and quick a fighting system as has ever been realized, complimented by batshit-crazy backgrounds ranging from the Rainbow Bridge of Thor’s Asgard to the hooker-infused slums (we wish) of NYC. Online play and super moves also abound, sweetening the pot since the last entry 11 years ago. We’ve had two good Spider-Man movies, 0.75 good Hulks, and no good Fantastic Fours since then—and MvC3 licks them all.

Okamiden
Capcom; DS
2006’s Okami was as stirringly breathtaking as it was criminally overlooked. So it’s nothing short of a minor miracle that despite its forebear’s poor sales, the sequel, Okamiden, is actually seeing the light of day. Playing much like The Legend of Zelda meets calligraphy class, Okamiden puts you in the paws of the little wolf god, Chibiterasu, offspring of the original’s divine protagonist, as you and your human companion battle against demons straight out of Japanese lore. Visually, the game looks like a sumi-e illustration come to life on a woodblock print, and like its predecessor, you will use the Celestial Brush to draw symbols and script that can be used as both weapons against dark forces and tools with which you can affect the game world. However, this time around, you will actually be doing the pen work yourself on the DS touchscreen, making for a much more immersive experience. If you like stunning handheld visuals, Japanese stuff, and corporate redemption, do Capcom and yourself a favor and get on this immediately!

Killzone 3
Sony; PS3
If, like most American consumers, you can’t get enough of that bang-zoom 3D that’s sweeping the nation… and you love splattering the brains of alien invaders across the purple mountain majesty with a wave of your hand, then do we have a treat for you. Killzone 3 is one of the first games to not only support full 3D graphics (it can also be played in normal 2D), but also Sony’s Move motion controller, making it one of the most immersive first-person shooters out there as you and your partner blast your way out of a bloody civil war between two political factions on an alien world after a black hole is left in their seat of power. This is, naturally, due to you blowing their dictator’s brains out in the previous game. Remember? Good job, bro. Killzone 3 also offers up some new features like jet packs, exo-skeleton suits, and murderous melee attacks like neck-snapping, throat-slitting, and the timeless classic that is the eye gouge. As should be expected with any self-respecting modern-day shooter, Killzone 3 offers a robust online component so you and your yahoo friends can continue your ongoing debate over who is a bigger douche while blasting away at strangers in the comfort of your own home.

Dragon Age 2
EA; X360, PS3
With a story told in framed narrative (à la Princess Bride) and taking place over an entire decade filled with swords, sorcery, and sexy time, Dragon Age 2 follows the adventures of a steely badass named Hawke (who can be male or female) as he/she rises from homeless to hero. Collecting a small army of warlocks and warriors to aid your travels, this action RPG features an intuitive mix of strategic character building with good old-fashioned button mashing as you lay waste to the legions of orcs, giant spiders, and sleazy wizards that stand in the way of your greatness. However, your personality will be just as important as your physical prowess, as all of your dealings will affect how the rest of the world treats you and how your story plays out. If you’re charming and savvy, you may have an easier time taking down evil—and perhaps a few pantaloons in the process. That’s right, you can totally get your dragon slain in this game. When you boil it right down, what last year’s Mass Effect 2 was to the space-age sci-fi kids, this month’s Dragon Age 2 is for the Dungeons & Dragons set. And as a squealing teenage girl for both games, we could not be more chuffed.

Crysis 2
EA; X360, PS3
You want more aliens, you say? You long to see a visually stunning version of New York City in catastrophic ruins once more? A silent, well-armed hero to quell the invading threat would be just what the doctor ordered, you’re thinking? Well, it’s your lucky day. Crysis 2 takes the limit-pushing beauty of the PC original and somehow makes the sequel look even more spectacular on the home consoles as you take on the role of Alcatraz, a super-soldier with an even more super suit that allows you to more or less become Superman as you battle an alien horde in the burnt-out husk of the Big Apple. In addition to all manner of wild weapons, the aforementioned suit allows for many displays of inhuman feats, ranging from god-like leaps across the tattered cityscape to nigh invisibility, making silent kills from behind that much more nasty. While this all may sound like standard fare for a first-person shooter, when played in 3D, as you are able to do, Crysis 2 really shows what it’s made of, as buildings collapse around you, enemy fire grazes past your dome, and falls from high places actually give you wicked vertigo.

PlayStation Move Heroes
Sony; PS3
If you have been a longtime PlayStation fanboy/girl, then get out a fresh pair of jeans because the ones you are wearing are about to be heavily creamed. Starring six of Sony’s most popular characters from the worlds of Ratchet, Jak, and Sly Cooper, PlayStation Move Heroes thrusts our heroes and their sidekicks into battle against some world-gobbling maleficence or another. But the real story here is that this is the first major adventure game made exclusively for Sony’s waggly new controller, the Move. As such, much of the in-game action focuses on you swinging, flinging, or bowling various weapons at your adversaries. While not the hardest core of games, PlayStation Move Heroes provides a colorful, lighthearted respite from the onslaught of titles awash in grit, gore, and general gnarlitude.

Yakuza 4
Sega; PS3
You ever hear the story about the Japanese guy who owed the Yakuza money that he couldn’t pay up so they took him out to a shed in the woods, nailed his dick to the wall, set the place on fire, and then handed him a knife before they drove off? I’m pretty sure that doesn’t happen in Yakuza 4, but you can extort money from business owners, sing karaoke, and create the number-one hostess bar in all of Tokyo! This, of course, is just the tip of the katana, as you play out an entire Japanese mob drama in the role of one of four characters, each with his own weapons, moves, and stories, in an effort to navigate the seedy criminal underworld. Several parts of Tokyo have been painstakingly recreated along with a few fictionalized versions of real spots like the red-light district. We imagine this is because the game makers didn’t want to end up offending anyone and subsequently find their own birds tacked to a tree. With a soundtrack featuring big-time Japanese hip-hoppers and DJs, Yakuza 4 is ichiban for the civilly grimy.