Somewhere on New York’s Lower East Side, Lizzie Bougatsos’ phone is ringing. She’s in the […] 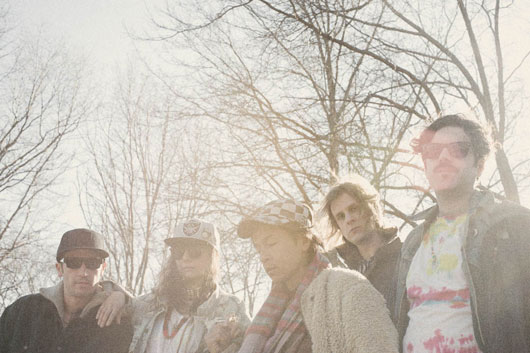 Somewhere on New York’s Lower East Side, Lizzie Bougatsos’ phone is ringing. She’s in the […]

Somewhere on New York’s Lower East Side, Lizzie Bougatsos’ phone is ringing. She’s in the street hailing a cab to get up to Union Square, where a sculpture of Andy Warhol is about to be unveiled in a few minutes.

She answers, breathlessly: “My friend had a great idea to do the interview where Interview [magazine] started, outside the original Factory location. You like that?”

“Where are you? You wanna meet me there?” she says.

I wish I could, I tell the vocalist from Gang Gang Dance, but I’m 660 miles away, in Detroit.

“Oh, that’s cool! I’m jumping in the cab. I’ll call you when I get there,” Bougatsos says. She sounds how she looks in performance: a little wild, a lot stimulated, lyrical and fun.

The plan is to jam a long-distance conversation about the band’s decade-long career and its most recent release, Eye Contact, into about an hour. Once Bougatsos gets to Broadway and E. 17th Street, we add keyboardist Brian DeGraw to the call and it feels like we’re all in same room together, almost. Only street noise and chatter coming from the excitement of the Warhol reception breaks the illusion.

This controlled chaos proves the perfect backdrop for a talk with the co-founders of Gang Gang Dance, a group that began as a noisy, trance-rocky, polyrhythmic sonic-and-visual improvisational groove art project—and largely remains that way over 10 years later, with some subtle shifts in direction.

Along the way, new bass and percussion influences began to emerge. Synthesizers and other electronics multiplied. Music from North Africa and the Middle East collided with UK bass and nuanced electro-pop. Most recently the band has mined similar swirly neo-psych territories to those explored by Elizabeth Fraser and Robin Guthrie. And right on time, too. The new LP is on 4AD, the label that—thanks to bands like Fraser and Guthrie’s Cocteau Twins, Wolfgang Press, Dead Can Dance, and the masterfully somber amalgam, This Mortal Coil—helped define the tenor and tone of the mid-1980s.

Bougatsos is giddy at the mention of Fraser. “I adore her ability to communicate a song in languages that come from some other place, where understanding it is not important,” she says.

DeGraw sees the fit for GGD as part of a continuum that includes 4AD’s early roster, the outsider guitar-based rock of the middle period (Pixies, Throwing Muses, The Breeders) and more recent signings like Ariel Pink’s Haunted Graffiti, Deerhunter, and TV on the Radio.

“I think we’re kind of part of the next direction the label is headed,” he says. “There is a relationship to what we do and the way the label has developed its catalog over 30 years, in sound and design.”

Design is an important feature when talking about the overall creative output of Bougatsos and DeGraw, both visual artists and active on the NYC gallery and museum scene. The cover for Eye Contact, by the way, is not by legendary 4AD graphic designer Vaughan Oliver, but features an insect covered in morning dew taken by Polish photographer Miroslav Swietek. It’s creepy-cool.

While Bougatsos moves around at the Warhol unveiling and we briefly lose her connection, I ask DeGraw to set the table for the band’s origins. It is a tale filled with some drama and trauma, as fans of the band are well aware.

The seeds for the group were planted in Washington, DC, where DeGraw met drummer Tim DeWit and formed The Cranium, a spazz-rocking band influenced by the social, political, and sonic energies of Nation of Ulysses and Fugazi. DeGraw was attending Corcoran College of Art and Design at the time.

“It was a good time to be in Washington,” he says. “A lot of stuff was going on in music and the arts: The community was engaged as a whole.”

DeGraw, who’s originally from Connecticut, and DeWit moved up to New York in the late 1990s, and Gang Gang Dance came together as a band in 1999 or 2001 (the exact year remains fuzzy), initially calling the project Death and Dying. Bougatsos, now back on the call, says, “We got together sometime back then, after I met those guys. We all had eclectic taste in music, but we kinda bonded over hip-hop.” The band was more a collection of friends looking to drive their ambitions forward via art and music. Gang Gang Dance became the vehicle.

Bougatsos is a suburban New Yorker who went to West Virginia for college, polished up her poetry and performance art skills on a small scene, then came back to the big city to attempt it on a much higher level.

Into the evolving mix came guitarist Josh Diamond and another vocalist, Nathan Maddox. The fledgling group shared a practice space with Animal Collective and Black Dice, two of the major players in the East Coast psych-noise scene of the early ’00s. Asked to share an anecdote from that time, DeGraw says he recalls hearing either of the two bands jamming through the wall, while GGD members sat outside and waited to go into the room.

“There would be this incredible amount of sound coming from inside, just building and growing. It sounded like there was a massive amount of instrumentation,” he says. “But when we went in, we saw it was mostly synthetic sounds coming from small sources. I think that was a moment when I saw how electronics could play an increasing role in what we do.”

Incredibly, during this period of incubation, Maddox was struck by lightning and killed while atop a building. He had done this before, apparently, offering himself up to the sky whenever an electrical storm rolled in.

His sudden death had a catalytic impact on Gang Gang Dance, which had a spiritual and practical awakening of sorts. Up to this point, in 2002, the group hadn’t committed any music to a recording. By 2004, that had changed with the rapid release of two full-length LPs, Revival of the Shittest and Gang Gang Dance. The first, on the Social Registry label, contained eight untitled but juiced-up tracks ranging in style from improv jazz rock to tribal ecstatic dance to abstract minimalism. The second release had two long pieces (each roughly 20 minutes long) with multiple subtitles, like “Rugs of Prayer” and “Trance,” and two others that gave a nod to Maddox: “Track w/Nate” and “T.G. Nate.”

Other titles—”Dancehall,” “Spoken Word,” and “Percussion”—foreshadowed the direction the group would be heading the rest of the decade.

The next release, God’s Money (2005), began to get critics’ attention, and comparisons to Animal Collective were tossed around, though GGD was already becoming something else: a percussive, bass-rich cosmic dance band with emerging urban street cred. That continued on 2008’s Saint Dymphna—released on Warp in the UK—which included an inspired rant by London teen grime MC Tinchy Stryder.

DeGraw says his interest in grime came when a friend came back from England with a mixtape of music that brought the band’s love of hip-hop full circle.

“The music worked liked our own music works: It had a rolling, free-flowing feel with beats and rhythms that had a life of its own,” he says.

“And the vocals are like another instrument—you don’t have to understand the words for the music to have impact,” Bougatsos says.

The track brought GGD even closer to a club-culture vibe, without compromising the group’s arty aesthetic. The same year, the band opened the Whitney Biennial with a free live performance and hosted the massive 88 Boadrum concert in Williamsburg. The event, begun by Japanese noise legends Boredoms the previous year in Los Angeles, featured 88 drummers playing an 88-minute piece.

Over the next few years, a few notable distractions befell the group. In 2008, drummer DeWit was shot in a bar in Grand Rapids, Michigan, where he’s from originally. He wasn’t seriously injured, but left the group and was replaced by Jesse Lee, who was beaten by security guards at a festival in Belgium in 2009. Gang Gang Dance also lost its gear in an electrical fire at a club in Amsterdam the same year. A mythology of doom became associated with the band—offset, perhaps, by the presence of a “spiritual advisor” that began to accompany the group on tour.

Then, some comparatively good news: In 2010, the band claimed that pieces of its song “House Jam” were lifted without credit for Florence and The Machine’s “Rabbit Heart.” Florence acknowledged “the mistake” and said the song was meant as an “homage” to Gang Gang Dance. The group now sees royalty checks from a song contained on a bestselling, BRIT award-winning LP, Lungs.

The last few years have been spent tweaking and building the sound and vision, all in preparation for GGD’s new relationship with 4AD, and Eye Contact, one of this year’s most highly anticipated releases. Appetites were whetted by the first single from the LP, the sparkly, proggy 11-minute space-jam “Glass Jar.”

The album is made up of seven tracks with three interludes used to bridge slight variations in style. “Adult Goth” picks up a synth line begun in “Glass Jar,” pitches it down, adds some rhythmic bounce, then gets fatter and tougher as it winds down. “Chinese High” has a lightness that brushes past Swedish, French, and J-pop territories using an alluring irregular heartbeat. Similarly, “Mindkilla” employs odd time signatures and jagged basslines that give a nod to UK garage and 2-step, but the melodic synth breaks elevate the piece until it becomes quite another, more beautiful, high-flying animal. There is a frenzy of jamming and rapid shifts in direction and pace that bring the track to a close.

On “Sacer” and “Thru and Thru,” Bougatsos dominates, gliding along the electronics-based backdrop—even Diamond’s guitar is laden with effects that more resemble a synthesizer than a conventional six-string instrument—then dipping and bringing her vocal down to a near-whisper. Yes, it must be said: the voice, the range, the whimsy all recall Kate Bush (“Wuthering Heights” period) and Mary Margaret O’Hara circa late-1980s and the stunning Miss America LP.

But Eye Contact‘s best track might be “Romance Layers.” This could be one for the ages, a soul-stirring power ballad with electro-house/hip-hop crossover potential. It doesn’t sound like either, ultimately, but it contains elements of both and features Hot Chip’s Alexis Taylor, whose huskier vocals add depth and texture to the song. Layers of synthetic strings don’t hurt.

Back in Manhattan, Bougatsos is getting lost in the crowd gathering around the Warhol monument. Over the phone, in the excitement of background static, it sounds like the kind of party Andy would have loved. DeGraw is winding down his end of the conversation when she breaks in.

“There is somebody who wants to talk to you,” Bougatsos says, suddenly, handing someone the phone.

It’s a bit crazy and chaotic, life mimicking art in an unexpected way. “Hello, hello,” I say. But there’s no one there. But it’s perfect, it’s fun—a better close to an interview with Gang Gang Dance could not have been planned.

Then we lose her.

Eye Contact is out May 10 on 4AD. Stream the whole album below, and check out our favorite Gang Gang Dance tracks here.