De Tropix: M.I.A.’s backing vocalist takes her own hype to the next level. 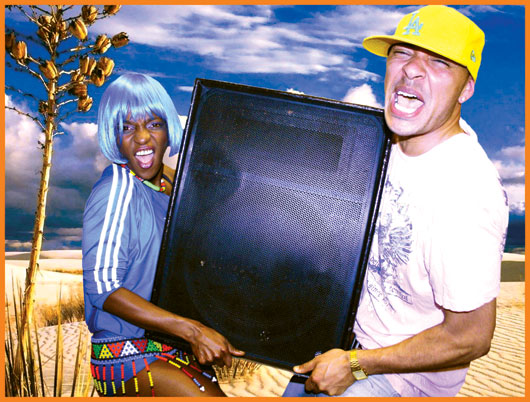 De Tropix: M.I.A.’s backing vocalist takes her own hype to the next level.

“Cherry B” Byron might be most well known as M.I.A.’s hot-stepping hype girl, but, as one half of De Tropix, she isn’t ever content playing second fiddle. A partnership with DJ/producer Damon Bowen (a.k.a. Damon Alexander; formerly DJ Instinct), De Tropix cooks up a hyperactive blend of dancehall and global beats, infused with tinges of lovers rock and even country, which takes a decidedly in-your-face approach to the dancefloor. But to Bowen, it’s “just good ol’ skankin’ music.”

Bowen and Byron met through mutual friends while attending university in the UK. Bowen, who had already jump-started his musical career DJing on pirate radio and at venues around London, was studying at Thames Valley University in Ealing; meanwhile, Byron, a trained choreographer and singer, was studying music and performing arts at Fulham & Chelsea College, and working on music videos on both sides of the pond. After about a year running in the same social circles, the two finally connected over their complementary artistic abilities. “Then when we found out we [were] both Vincentians, it was over!” Byron recalls, of their shared Saint Vincent heritage.

The two hit it off immediately and soon began collaborating and performing together as De Tropix. Rather than a regimented approach, they instead bring an insatiable curiosity and the need for a good time. “We’re both strong characters, says Bowen, who spins the beats and tag-teams with Cherry on the mic. “Cherry is a wicked front woman; she gets the crowd involved, and she’s got moves for days.”

De Tropix’s style is a compelling “musical soundclash” pulling from the changing influences in both members’ well-traveled lives. “[We] have tuned into the vibes of our surroundings,” says Byron. “Our music displays just that.” Thrown into this mix is Byron’s Caribbean upbringing and Bowen’s childhood surrounded by a lively blend of calypso, soca, country, classical music, and pop in Luton, UK. Bowen also dabbled in hardcore and hip-hop à la NWA, Public Enemy, Pete Rock, Nas, and Wu-Tang as a teenager in his pirate-radio days before eventually moving into the London electronic scene, where he tapped into favorites Ray Keith, Nookie, and DJ Hype. He loves to mess around with new equipment, and is still constantly digging around uncharted musical territory. “It’s amazing what you come across in the local charity shop vinyl section,” he says. All these influences inevitably turn up in the duo’s club-ready tropical and dancehall tracks, such as singles “Oy Ya Yoy (Oi Oi Oi)” and “Bad Name.”

De Tropix’s highly anticipated debut full-length studio album has been a long time in the making. Byron refers to it as an eclectic “mixture of melodies that bounce in collision with the duttiest bassline”—or simply “sexy ragga.” The duo has been busy piecing together tracks with guest producers such as friend Nick Philpin, Parisian underground producer Blackjoy, JC, and Black Russian. De Tropix also hopes to nab some guest appearances from long-standing friend Elly Jackson (from La Roux) and “Vincy” celebs Mandrike and Minkah of Mystik Vibration.

“If we missed an opportunity for a feature there, that would be silly,” adds Bowen.