For those of us on the West Coast, Decibel Festival is a big deal. With […] 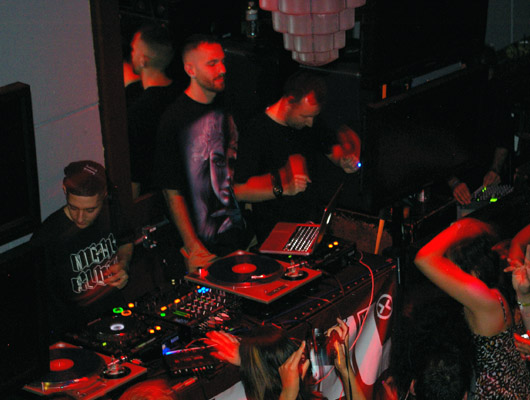 For those of us on the West Coast, Decibel Festival is a big deal. With […]

For those of us on the West Coast, Decibel Festival is a big deal. With a deserved reputation for gathering an immense roster—which includes some of the most established names in electronic music along with a generous sampling of burgeoning up-and-comers—the Seattle festival is arguably the most comprehensive gathering of electronic producers, DJs, and artists to take place this close to the Pacific each year. Here’s what Decibel’s first two days had to offer.

Kicking off in the middle of the week, the first night of events was spread out across the city, and with only half a plan of attack set in motion, I first found myself immersed in a throng of enthusiastic head nodders at Neumos with their eyes and ears fixed on Shigeto. Moving between a table full of the usual noisemakers—laptop, controller, etc.—and a full drum set, the Michigan native spent his rather long set (well over an hour) equally conjuring up heavy, swirling beats while standing over the glow of his computer and taking moments to delve into startlingly energetic, improvised drum solos that proved the man is much more than a mere button pusher.

That same venue hosted more beat-oriented happenings that evening, next bringing East Coast hip-hop producer turned trance-sampling instrumental beatmaker AraabMuzik to the stage. No questions about it, the man is an absolute ace on the MPC, as he punched out beats live at a blistering speed which, if it wasn’t visible enough from one’s place in the crowd, was projected on a massive screen for all to see (although his fingers moved so fast, the projections were at times nothing more than a blur). If anyone at the festival that night had an insatiable craving for stuttering kick drums and skittering hats, AraabMuzik delivered in full and then some.

As the hour turned later, I went in search of more adventurous sounds at the Dropping Gems showcase, which had compiled a list of impressive up-and-coming West Coasters to woo the crowd on the festival’s opening night. In particular, Los Angeles’ Asura impressed with his set of rich, percussive offerings, piling his own lush, textured productions on top of each other, and occasionally working in a few like-minded pieces, most recognizably dropping a cut from fellow SoCal resident Jonwayne towards the end of his performance.

Finally, the official Decibel opening-night party presented one of the festival’s biggest names as its headliner—Zomby. The elusive UK producer has a rather sordid reputation when it comes to live performances—namely, his tendency to not show up for them. So it came with some palpable amazement that the man himself was indeed on stage, in the flesh—well, except for a mask covering his face. It may seem obvious, but Zomby’s tracks make perfect sense in the context of a proper club soundsystem and the precise drums, harrowing bass, and futuristic synths really came alive on Re-Bar‘s larger-than-life speakers, which pushed a plentiful amount of wattage into the audience and inspired intense reactions from the crowd early in the set. Eventually, the track selection moved increasingly towards drum & bass territory for a good 15 to 20 minutes before returning again to the dark, grimey sounds of Zomby’s more recent years. But somehow along the way, the momentum seemed to be lost. Possibly dealing with technical issues throughout the set (his monitors were replaced and tweaked continuously by the venue’s staff), Zomby would disappear from the stage for minutes at a time, returning to fire the next track, look around, and disappear again, confusing most of us on the floor. Truthfully, his tracks are just about good enough to not really care what’s happening on stage, but many festivalgoers were left scratching their heads, possibly for the first time really confronting their idea of what an electronic-music performance actually is.

I began the second day of events watching Canadian up-and-comer Monolithium put together an impressive opening set of UK-infused beats. Given the first slot for what would eventually become the Night Slugs showcase (and first real dance party of the festival), Monolithium showed that he knew his way around slippery bass music with a hybrid DJ set/performance that found the producer dropping plenty of futuristic, R&B-flavored tracks, occasionally punching out his own beats, and even coyly working an Aphex Twin tune into the mix.

Down the street, a crowd was rumored to be growing larger by the minute, so I rushed to the Paramount Theatre to ensure that I had an opportunity to see Amon Tobin‘s much-buzzed-about multimedia performance, Isam Live. After the crowd (which was quite different than anything else I’d seen at Decibel so far, mostly due to the fact that it was all ages) had taken any and all opportunities to yell in excitement in the moments building up to the performance, the curtain was finally lifted and Tobin’s three-dimensional, multiple-sided structure was revealed as an amazing array of detailed images flawlessly appeared on its surface. With no shortage of intense, hyper-real soundscapes, Isam Live‘s musical offerings moved from one electro-acoustic space to the next with a flair for the dramatic and drawn-out, leaving the visual side of the project to remain the focus with an unbelievably fluid series of video projections. But the stunning visuals were just that—visual—and so I left the multimedia immersion behind to seek out the more rewarding musical endeavors taking place at the Night Slugs showcase.

When I arrived, the showcase was well under way. Kingdom was the first of the crew to represent the label, and he did so properly, using two CD-Js to put together a sleek, bass-laden mix marked by touches of futuristic R&B and house. His first UK counterpart of the night, Girl Unit, picked up the momentum a bit, focusing on slightly more four-on-the-floor-leaning tracks, although his selections did feature their fair share of tuned percussion, pitched vocals, and stuttering fills. Between the two producers, an ever-growing dance party was beginning to take shape, one which enticed you to dance and move as much as it made you occasionally take a second to marvel at the truly space-age sounds the men were able to put together with complete ease and calm.

A momentary break from the future of dance music was needed, and Holy Fuck seemed like the perfect solution, so I headed down the street to The Crocodile. Anchored by an absolutely solid rhythm section (think Liquid Liquid, only replace the percussionist with a cheesy drum machine), the Canadian four-piece built propulsive songs out of what would initially seem to be meandering noise. But once the dual frontmen (both with their own table of blinking electronics and various noise makers) reeled in their sonic abstractions, poignant pieces of dance-worthy indie jams worked the crowd into a frenzy of frantic movement.

By the time Bok Bok took to the decks back at the Night Slugs showcase, it was clear that any stragglers from other parts of the festival had made their way to the Baltic Room. And, of course, Bok Bok did not disappoint, putting together a set that lifted the energy of the entire crowd with a choice selection of surefire UK-leaning crowd pleasers, and taking the opportunity to delve into the highlights of his imprint’s catalog (you know which ones). Before the night was out, the three Night Slugs affiliates came together for a very special back-to-back-to-back set (pictured at the top of this post), where the only people feeling the tracks more than the crowd were the DJs themselves, who nodded along to each other’s peak-hour selections with an air of mutual approval.

So much has happened, and we’re not even halfway through the five-day festival. Go here for part two of our Decibel coverage.