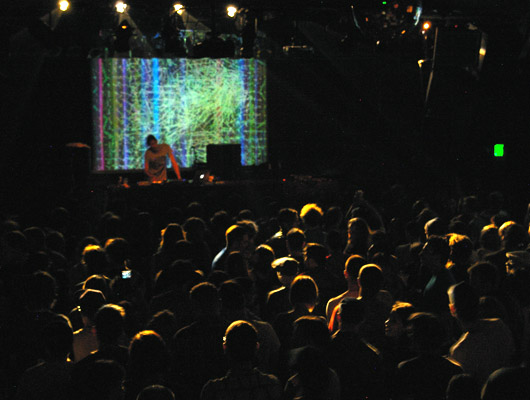 Friday’s musical endeavors began early, specifically at the Nordstrom Recital Hall, a legitimate performance hall in downtown Seattle where the first edition of the Optical showcase was set to pair the sprawling works of more ambient-leaning acts with similarly oriented visual presentations. Beginning the showcase was Brooklyn duo Mountains, whose plain-sounding name proved entirely appropriate through the course of its warm, meandering set. With a table full of various pedals and sonic manipulators accompanying a mini-modular synth and an acoustic guitar, the pair built mesmerizing masses of blissfully melodic noise which, despite the visual accompaniment, begged you to close your eyes and be drifted away.

Considering my weekend was bound to be filled with producers staring at their laptops and DJs perched behind decks, I jumped at the opportunity to see an act coax dance-worthy tones out of actual hardware. Answering the call was Brooklyn duo Blondes, who assembled an impressive set of retro-tinged techno at the Showbox SoDo. With at least three pieces of gear per member (including a Juno keyboard off to the side), the NYC residents crafted an entrancing mix of brooding electronics anchored by classic drum-machine patterns and rich bass tones, on top of which the fluttering, at times lopsided, musings of their hardware were free to form their own glistening patterns of bleeps and bloops.

Friday’s true highlights came towards the end of the evening, beginning with a Live PA set from one of bass music’s brightest luminaries, Martyn. At first, I was a little unsure how receptive the crowd would be to Martyn’s dark, at times intense, brand of techno-infused dubstep, particularly following the warm response the rolling tech-house of Martin Buttrich had received just prior. But after delving into a few cleansing minutes of washy synth tones and distant vocal samples at the beginning of his set, Martyn had the Neumos crowd at full energy once the very first kick drum hit. Standing behind his selected gear (which included a laptop, controller, and Monotron), the bass-music veteran moved through rhythmic patterns and sonic landscapes with mesmerizing fluidity and sparked one of the week’s most intriguing and rewarding dance parties.

Friday night would not have been complete without the weekend’s first helping of real house, and Detroit’s freshest face, Kyle Hall, proved to be the perfect ambassador of all things funky and soulful. Hopping between a set of turntables and a pair of CD-Js, Hall’s set was hands down the most unabashedly fun performance of the festival. The Detroit native (who, mind you, isn’t even old enough to legally drink yet) controlled the crowd with his infectious energy, jumping, smiling, and clapping while he laid down one deep, soulful gem after another. When the lights finally came on, it was clear Hall had made an immensely positive impression, as the whole club was happy to finally give something back to the DJ, raucously clapping and cheering for the youngest, most talented person in the room.

Saturday’s schedule of events was a bit overwhelming, with an outdoor event kicking off in the early afternoon, the second edition of the Optical series, a boat party (yes, a boat party), and a slew of worthwhile showcases slated to take place throughout the evening. Being one always up for music outside the confines of a dark night club, and slightly optimistic that the Seattle overcast would eventually wear off (which it did for a few brief moments), I skipped over to the Capitol Hill district for the dB in the ParkFrite Nite showcase. The exclusively West Coast line-up was exceptional, and Portland up-and-comer Natasha Kmeto stuck out first with a helping of percussive, adventurous beat-oriented productions, which came complete with gorgeous layers of her own live—and mostly unaltered—vocals. Frite Nite label boss Salva followed shortly thereafter, tearing shit up with his simultaneously nasty and smooth repertoire. The music coming from the speakers was so enthralling that no one seemed discouraged when a light rain began to fall.

The second and final presentation of the Optical series began early in the evening with another dose of ambient audio-visual offerings. LA’s Matthewdavid delivered a transcendent set of dusty, side-chained atmospheres before glitch pioneer Oval manipulated his laptop to create an extensive set full of rich micro-textures and Entroducing-run-through-a-supercomputer-style drums. The recital hall’s comfortable seating and detailed sound system allowed the audience uninterrupted concentration on the works being presented and, in doing so, made both of the performances that much more absorbing and enjoyable.

But what would a Saturday night at Decibel be without dancing? Well, kind of pointless, which is why I was thankful to find Detroit legend Mike Huckaby with a giant crate of time-tested vinyl behind the decks at Neumos. Although 10 p.m. struck me as a strangely early slot to put someone of Huckaby’s reputation, it eventually made perfect sense when the man put together a flawless set of irresistible Motor City dance music that ensured my night would be pretty damn good, no matter what happened the rest of the evening.

The soulful vibes continued at Nuemos, thanks to Wolf + Lamb cohort Deniz Kurtel. Starting her set focused on four-on-the-floor, vocal-driven house, her first 15 minutes were a little unadventurous compared to the productions she’s known for, but once she slipped into more sleek territory and began dropping electro-indebted breaks underneath it all, the party was again in full force.

Neumos served as the core for my Saturday night, but I did manage to take one essential break to catch Machinedrum descend upon The Crocodile, where the man dropped nothing but juke, juke, a little bit of dubstep, and a lot more juke. There was no shortage of bubbling percussion, chopped hip-hop vocals, and frantic kick drums in his set that night, and the crowd was happy to hear it. Although it should be noted that there was little to no crazy footwork seen on the completely packed dancefloor, there was a sea of endlessly bobbing heads and the occasional fist pump, most likely inspired by Machinedrum’s manic on-stage presence. The man mouthed along to the songs, furiously shook his extremities, and occasionally replaced the crass hip-hop accapellas with his own voice for a phrase or two.

At last, the final acts of the night were upon us, and again Neumos had the most to offer with French deep-house duo Chateau Flight undertaking the closing honors. With only two CD-Js and an awesomely retro-looking mixer between them, the two Frenchmen concocted an appropriate mix of deep, synth-driven house that ran the gamut from propulsive and invigorating to vintage cheese, all brought together with that effortless French knack for finding the middle ground between fun and sophisticated.

The last day of the festival featured fewer showcases than its predecessors, making the decision of where to go for the night easier than it had been all week. The moderately sized Re-Bar club seemed ripe for a dance party, and I was quickly rewarded for my choice by Kate Simko‘s masterful set of subtle, irresistible techno. Gently swaying back and forth and beaming a genuine smile from behind her laptop, Simko unfolded her productions with an appropriate patience, building moments of potent tension until the dancefloor could barely take it anymore, then revealing her sophisticated techno, piece by irresistible piece.

As reluctant as I was to leave before Simko’s set was complete, my curiosity took hold and I headed for the last time to the Baltic Room, where the harrowing sounds of drum & bass had been pounding all night. Exit Records head honcho dBridge was just beginning the night’s closing set when I arrived, and heads all around were already bobbing furiously to the accelerated tempo. With track after track of dark, percussive boom-bap, the Londoner proved that although his chosen genre may not be in its golden age, drum & bass can still be as visceral and invigorating as any of the electronic genres.

My last dose of Decibel came in the form of the three outlandish Frenchmen known as dOP and their brand of raucous house. While one member stood behind a giant mixing console and another behind a small gathering of keyboards (which even included a Wurlitzer), the group’s vocalist/frontman did his best to rile the crowd into a Sunday-night frenzy, utilizing hip-hop-style call and response, bringing women on stage to serenade, and very early in the performance going shirtless. Despite all the antics, the man could sing and displayed some incredibly weird and intriguing vocal control while the pair responsible for the musical side of the endeavor unleashed a slew of vibrant, jazzy house tracks. But for all that was in dOP’s favor, a good portion of the audience—myself included—had trouble looking past the group’s over-the-top, over-sexed persona, which made it difficult to simply lock into the hot tracks being offered.

For all of Decibel’s far-reaching ambition and ability to bring artists from all over the world to Seattle, the festival still has a grassroots feel to it, both in the way things are organized and especially in terms of the people it attracts. Astonishingly, the vibes were rarely off for the whole week, which is quite a feat, and one I’d like to think is accomplished because Decibel is put together by people who are passionate about electronic music for people passionate about electronic music. As one of those passionate people, I’m thankful to have a festival like this one so close to home.