Today, we present the first installment of our new feature series, Deep Inside. We intend […] 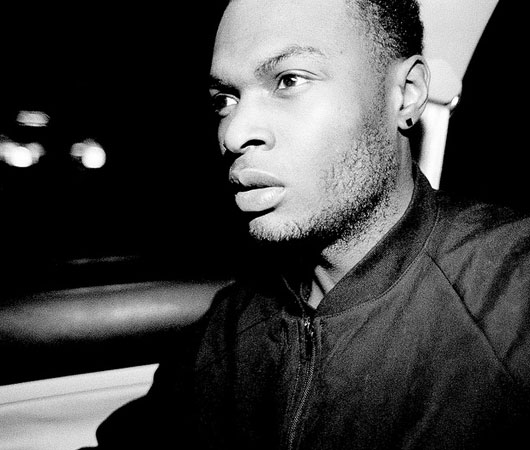 Today, we present the first installment of our new feature series, Deep Inside. We intend […]

Today, we present the first installment of our new feature series, Deep Inside. We intend to use this space as a forum to expound upon the themes and sounds of releases deemed important by the XLR8R staff in a more in-depth manner than our daily reviews. You’ll see both good records and bad records come through here, as Deep Inside is essentially a feature-length assessment of noteworthy albums.

Death is arguably life’s most personal experience. It’s a tragedy that we all view in our own unique ways, our perceptions often colored by factors beyond our control. Though specifics of death and the possibilities of an afterlife are essentially a complete mystery, speculations about their nature are anything but scarce. Yet the weighty and controversial topic is often left unexplored in much of contemporary culture, at least in an any extensive manner. Leave it to Darren Cunningham, the enigmatic figure behind the music of Actress, to tackle it on his third LP, R.I.P., and present to us not only an intimately personal vision of death and the hereafter, but also what is one of the best albums yet unveiled in 2012.

The Wolverhampton-born Cunningham was somewhat reticent with the press as his new record prepared to drop this past Friday via Honest Jon’s, but UK paper The Guardian and Brooklyn-based website Self-Titled somehow managed to sit down and chat with him about R.I.P.. His conversation with the former publication gravitated toward the metaphysical themes explored throughout the record’s 15 tracks, while the latter’s interview mostly discussed the actual sounds and processes that went into creating the captivating music. Both angles are of utmost importance here.

“I make my music in a space [in which I’m] thinking about all the sounds I’ve heard over the years,” Actress explained to Self-Titled, loosely implying that this album is something of a culmination of his life experiences thus far. And when he spoke to The Guardian, the artist said, “I started the album with death.” Later, he adds, “I wouldn’t be able to write the music that I write if I didn’t believe in God, trust me.” Throw those quotes together with a few choice song titles—like “Ascending,” “Caves of Paradise,” and “IWAAD” (or “It Was All a Dream”)—and a full image starts to form: R.I.P. is an out-of-body experience, the account of Cunningham’s inner travels through the realms of Paradise rendered as delicate and mystifying electronic sound.

In the hands of a lesser producer, an attempt at translating such heady and nebulous ideas into music could go horribly awry, but Actress has three necessary tools to make it work—patience, insight, and techno. Cunningham has explained that during his creative process, he considers himself to be “dead,” unable to consider what he’s creating until after it’s been made. Of course, more realistically speaking, he’s not actually dead while he works, but something closer to unconscious or just beside himself, allowing the music to entirely fill his headspace (undoubtedly with the help of copious amounts of his beloved weed). That could be the first clue as to how R.I.P. sounds so extradimensional; it isn’t the product of a totally cognizant mind. Like Salvador Dalí’s infamous painting methods, Actress seeks communion with his subconscious in order to accurately portray his spiritual journey. He begins with “R.I.P.,” the album’s impetus and most ominous moment—its wavering synths sounding like an alien lament and its heavy low end burrowing through your skull. Indeed, you have to die before you can be reborn, and “Ascending” is, as its title states, the soul’s subsequent rise into the heavens, after which Cunningham pushes on to explore the otherworldly terrain and its phantom inhabitants with his mind’s eye.

R.I.P. is, without question, far removed from the twisted techno jams that comprise 2010’s Splazsh and Actress’ debut album, Hazyville, but the genre’s influence is nonetheless dominant. Instead of blatantly nodding to the great Detroit veterans or, say, the German minimalists, however, Cunningham inverts techno and dives further into its deep cavern of possibilities than ever before. Only after he’s reached the tunnel’s end does the producer return, emerging with a sound that favors visceral textures and supernatural moods over outright rhythms and melodies. Even R.I.P.‘s relatively straightforward productions—”Marble Plexus,” “Shadow From Tartarus,” “The Lord’s Grafitti,” et al—boast hooks and basslines that have been obscured into oblivion with white noise, tape hiss, and/or enough reverb to choke a mix. The lighter, pristine moments are often times more confounding, albeit in an entirely different manner, as the beats are eschewed completely for what amounts to an implication of rhythm. Spindly and bewitching, the finespun arrangement of “Jardin” has no fewer than four fragile sounds flowing on independent trajectories and bpms, and “Raven,” another of R.I.P.‘s loveliest tracks, only hints toward a central tempo with a shuffle of fuzzy static and stuttered thumps that are more strongly felt than heard.

Cunningham’s solitary meditations and subversive experiments ultimately serve a power beyond the dancefloor, so much so that even loosely referring to this music as techno feels like a misnomer. Maybe what he’s created across the nearly hour-long record is a form of ambient music, which would actually help explain why R.I.P. is inherently reminiscent of one particular groundbreaking album: Selected Ambient Works Volume II. Aphex Twin’s seminal masterpiece made quick work of turning both ambient and techno tropes upside down, somehow converting such well-travelled genres into a singular and transcendental moment in electronic-music history. You could make the argument that Actress does precisely the same thing on R.I.P., and specific examples of similarities between the two LPs are bountiful enough to make a strong case. “Cliffs” seems to have bestowed “Uriel’s Black Harp” with the instrument of its namesake; Actress’ mysterious “Glint” interlude or the uplifting “N E W” has plenty in common with spacious arrangements like “White Blur 1” and “Grey Stripe”; maybe R.I.P.‘s best track, “Caves of Paradise”‘s punch-drunk groove brings to mind the resonant rhythms of “Blur,” if only Richard D. James had infused it with his funky “We Are the Music Makers” bassline.

And yet, despite all of these parallels, Actress maintains his inimitable imprint on the album’s extraordinary brand of ambient techno via the power of gradual process. The Guardian closed its piece on Actress with an excellent quote from the producer: “It’s like people who make pop tracks, when they know they have a number one hit. I know at a certain point when that track is me, I’m the track now, this is what I am, this is what I’m meant to be.” How exactly a production gets to that point remains an absolute mystery to us. Does it involve prayer? Is there some kind of methodical sonic deconstruction required? Must Cunningham lose all sense of self in order to become the “instrument” he says he is? Much like any ideas and speculations about death, these questions can only be answered by the person who’s undergone the experience. And who’s to say it’s all the same for everyone? R.I.P. is obviously Actress’ own personal interpretation of death, faith, and the unknown. We’re just fortunate that it’s one which feels unquestionably truthful and sounds wholly sublime.