“The past inside the present.” Lifted from the 2002 LP Geogaddi, that quote was the […] 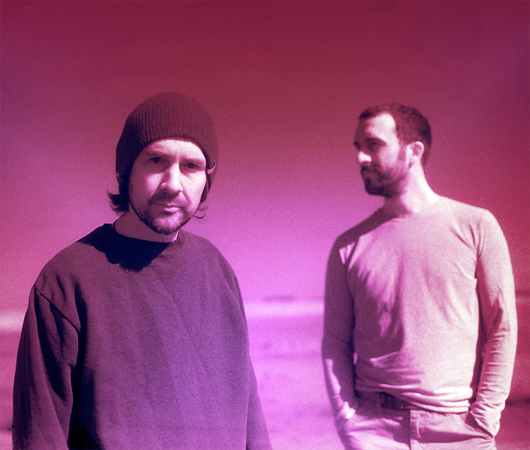 “The past inside the present.” Lifted from the 2002 LP Geogaddi, that quote was the […]

“The past inside the present.”

Lifted from the 2002 LP Geogaddi, that quote was the central mantra of Boards of Canada‘s bewitching “Music is Math,” a song which heralded a monumental album that made good on the fascination with numerology and predeliction for occultish themes that the Scottish duo had only hinted at on Music Has the Right to Children. It was a powerful moment for Michael and Marcus Sandison, because it essentially revealed that the brotherly producers were interested in more than merely writing downtempo IDM or technicolor trip-hop tunes. But there was something else in that song, something hidden in plain sight or at least obscured by the initial shock and awe of listening to Geogaddi. Notoriously secretive (well before that became a thing), Boards of Canada had subtly revealed a piece of itself in that esoteric vocal sample; this was a pair of artists acting as a conduit to the lost collective consciousness of yesteryear, conjuring memories of informational film reels, secluded communal living, early environmental activism, and mind-altering hallucinatory excursions, then shaping and handcrafting those remnants of the past into the colors and sounds of contemporary life. In the years that followed, the idea of “the past inside the present” came to define the duo and its music, but since the incandescent The Campfire Headphase LP first appeared in 2005, something drastically changed. Boards of Canada had a new vision.

From the beginning, Michael’s and Marcus’ music has always been inextricably linked with the past, as if the reason why it takes them so long to release new work is because it has to traverse actual decades before the world can hear it. And the Scotsmen’s first three full-length albums weren’t just masterful works of nostalgic futurism—they were also inspirational enough to spawn a litany of imitators and a handful of splinter genres (e.g. “chillwave”). Given that, any die-hard fan’s first listen of Tomorrow’s Harvest will undoubtedly trigger questions and confusion. Because now—instead of evoking the romanticism of a half-remembered history with crunching beatwork, evocative soundscapes, and spectral melodies—Boards of Canada is exploring a desolate and dystopian idea of our not-so-distant future, sharing its ominous predictions through some of the most clear-headed and forward-thinking production the group has ever released.

“We’ve become a lot more nihilistic over the years,” Michael recently explained in an extremely rare interview with The Guardian. “In a way, we’re really celebrating an idea of collapse rather than resisting it. It’s probably quite a bleak album, depending on your perspective.” He’s not wrong, but it feels like the veteran musicmaker is severely underplaying the darkness of Tomorrow’s Harvest. From song titles like “Sick Times” and “Reach for the Dead,” to the overtly macabre musical overtones, to its forebodingly prophetic name, right down to the time-ravaged imagery adorning its artwork, Tomorrow’s Harvest paints a picture of the lost civilization our contemporary culture used to call home. It’s an arid landscape riddled with the decaying structures of once vital cities; littered with bleached-white bones and neglected possessions; pocked by the ramifications of careless corporate industry and intense climate change; populated with malformed wildlife and nomadic clans; and haunted by aimless radio transmissions and the churn of propellers from helicopters surveying, searching, or watching overhead. This is the soundtrack of a grim inevitability. As Marcus points out, “If you look again at the San Francisco skyline on the cover, it’s actually a ghost of the city. You’re looking straight through it.”

Not unlike the authors of contemporary dystopian works The Road and Children of Men, Boards of Canada doesn’t explain in so many words how or why it arrived at the world of Tomorrow’s Harvest. However, the Scots have left their fans plenty of clues to hypothesize on and help them work out their own conclusions. “There’s actually more use of subliminals on this record than on any previous album we’ve done,” says Michael, “so we’re interested to see what people will pick up on.” And if there is any group of listeners dedicated to uncovering the mysteries of laboriously conceived and intricately produced music, it’s theirs.

The warbled voice which inhabits the outstanding “Nothing is Real”—an utterly satisfying song for any dyed-in-the-wool fan of classic Boards of Canada—delivers a specific and succinct message over the track’s phantasmic bounce; it’s entirely conceivable that isolating the frequency and deciphering its words would further illuminate the inner workings of Tomorrow’s Harvest. “Collapse,” placed in the actual center of Tomorrow’s Harvest (no doubt a clue to the album’s core theme in and of itself), is an airy synth piece said to be a palindromic composition, a theme which deeply inhabits the album. Even the record’s overall structure resembles a sort of Ouroboros-like mobius strip. From the chilly foreshadowing of “Gemini” to the moonless epilogue “Semena Mertvykh” (Russian for “Seeds of the Dead”), the dread of history repeating itself soaks through to the marrow of Tomorrow’s Harvest. Listening to the album from the outside inwards—first track, last track, second track, second to last track, and so on—might help uncover some of these mirrored similarities, not to mention put “Collapse” as the final word of that rearranged tracklist.

After the lights go out on the eerily sparse “Sundown,” we’re greeted with the steady anthemic charge of “New Seeds,” the only song on the album that offers a glimmer of outright hope to those of us traversing its barren terrain. If the brothers are indeed “celebrating an idea of collapse,” then it’s possible that this imminent destruction has been embraced with the intention of starting over—eschewing our oftentimes destructive lifestyles for, perhaps, something reminiscent of the simpler eras referenced in Boards of Canada’s early work. And “Come to Dust” only solidifies the band’s intent immediately afterwards. Essentially a reprise of “Reach for the Dead” (there’s that palindrome again), the lush and vaguely uplifting piece of beat-driven kosmische music evokes the feeling of watching juxtaposed time-lapse footage of a budding plant and an unfinished skyscraper reach towards the sunrise à la Koyaanisqatsi or Baraka.

Conjuring this kind of intensely metaphorical imagery feels entirely deliberate on Tomorrow’s Harvest, as the Sandisons have long been interested in filmmaking. Back in 2005, Michael told Pitchfork, “[We used to get] our friends together to make films. We had our crappy early-’80s bikes and went out with my dad’s super-8 camera making films.” And maybe because they are in fact trying to tell a cautionary tale of sorts, Boards of Canada’s new album is the most purposefully cinematic milestone in their discography, a collection of vignettes and snapshots torn from a greater narrative and pieced together like an impressionistic sci-fi film. Early on, the punch-drunk “Jacquard Causeway” sounds like radioactive sprites frolicking in the dusty wake of a lumbering behemoth, and later, its more playful sister track, “Palace Posy,” returns to see these carefree creatures happen upon a chorus of nomads in the midst of a dusk-lit song and dance. (Given the latter song’s anagram of a title, we’re almost directly told exactly what those people are celebrating.) And while it directly recalls the quiet majesty of Music Has the Right to Children and touches on Geogaddi‘s kaleidoscopic mysticism, “Sick Times” gives us a panoramic aerial view of the landscape before diving back down to hover in the shadows of its dilapidated ruins and come to land on the dry, sandy earth.

Plenty of more straightforward filmic references also abound. “We’re very much into grim ’70s and ’80s movie soundtracks,” Michael told The Guardian, before going on to cite the likes of iconic horror auteur John Carpenter and seminal Italian composer Fabio Frizzi as heavy influences on the new album. Furthermore, he shared that Boards of Canada set out to give Tomorrow’s Harvest a “VHS video-nasty element” that included both the band’s production approach and a stylistic kind of structuring. “We even went to the extent of timing changes in the music and the composition of the pieces in really specific ways to give an impression of something familiar from soundtrack work that was around 30 years ago,” Michael explained. Whether or not all of this comes across immediately or gradually or never at all, everything put into each track is part of the subconscious experience that Boards of Canada so painstakingly created for the dense and invigorating Tomorrow’s Harvest.

In speaking to Pitchfork about The Campfire Headphase eight years ago, Michael said, “People will look for secret things now in this record even if there aren’t any,” which Marcus corroborates when he says, “Instead of listening to the music, [fans] start looking for some hidden things immediately.” The same thing could probably be said about Tomorrow’s Harvest, so it’s important not to treat the record only as a scavenger hunt—no matter how much fun that can be. Like any great work of art, we may never fully understand every nuance and subtlety woven into the LP, but that doesn’t mean those elements whispering their hidden messages are any less integral. Maybe the glimmering sprawl of “Split Your Infinities” wouldn’t be as arresting without the unintelligible chatter sunken into its second half, but its presence isn’t necessarily an invitation to dissect the music until all of its parts are laid bare.

There is a joy in the illusory nature of both the mythos and the music of Boards of Canada, something which exudes an appreciation for depth, detail, and concept. It’s the same thing that drove fans around the world crazy with speculation and hope when Warp‘s marketing campaign for this album slowly unfurled. Very much in the same way, Tomorrow’s Harvest thrives in the excitement of directly confronting us with the unexpected and the unknown. After all, it’s those things that we thought we heard or that seem to be connected that are the most intriguing and keep people returning to Boards of Canada’s albums long after they’ve been released. Still, like commenter Rooksby wrote in the comments of Michael’s and Marcus’ interview with The Guardian, “Some secrets should remain secrets.” Because no matter if the Sandison brothers are reformatting our history through their own reflective lens or peering through a dusty looking glass to see what today’s conduct has wrought for our future, there will always be something just out of reach to ponder while soaking in their inexplicable music.