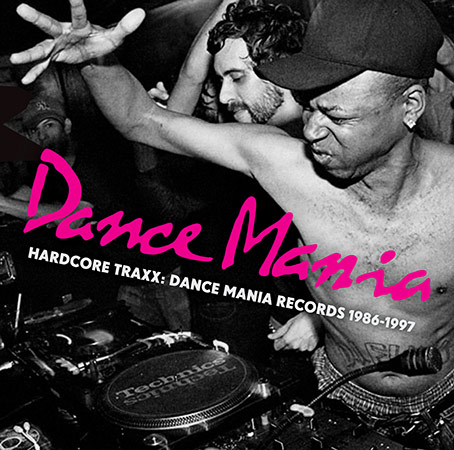 Nearly 30 years after its inception, pioneering Chicago house label Dance Mania is finally receiving the accolades it deserves. Launched in 1985, Dance Mania was operated by Ray Barney, a Chicago music industry heavyweight who grew up in music and inherited his family business (Barney’s Records, a record distribution company and local retail chain that attracted touring soul artists and working DJs alike). Operating the label out of the company’s existing business infrastructure, Barney went on to release approximately 300 Dance Mania records; looking back now, there’s little question that the label spawned numerous bonafide classics, played a part in many legendary artists’ careers, and essentially created the ghetto house genre. Even so, Dance Mania’s eventual reach and influence wasn’t apparent to anyone involved at the time; Barney claims the imprint was “just making records for DJs.” He adds, “Nothing was manufactured. Everything was genuine. We didn’t do anything to look good.”

According to Barney, when Dance Mania was active in the ’80s and ’90s, it was considered, even at its height, to only be the third most important label in the hierarchy of Chicago house, trailing behind Trax and D.J. International. However, that standing has undoubtedly changed over the years, thanks in part to the records themselves (and their continued relevance), the DJs playing them, and even the numerous Dance Mania documentaries—including one by eventual Zombieland director Ruben Fleischer—that surfaced after the label ceased operations in 2001. In the years that followed, a sustained passion for Dance Mania prompted several failed attempts to re-open the label’s doors, but it was only last year that Barney got the imprint properly back in business. More importantly, he did so with a simple intent—to get the records, many of which had become extremely hard to find, to the people, and to get the artists paid for their work. It’s no secret amongst DJs that the prices for Dance Mania vinyl have skyrocketed in the last five years, with both classics and obscurities frequently commanding more than $100 in the second-hand marketplace. Barney cites this phenomenon as a motivating factor, explaining, “The biggest thing is that the artists aren’t seeing anything for the records being [sold] at these prices.” As such, the first round of official vinyl reissues hit stores in late 2013, and now, Dance Mania has come together with the !K7 and Strut labels to assemble Hardcore Traxx: Dance Mania Records 1986-1997, a two-disc compilation representing the bulk of the label’s initial run.

The first disc fittingly begins with “7 Ways,” a slice of classic Chicago house from legendary producer Marshall Jefferson, operating as Hercules, one of his lesser known monikers. After jacking through another ’80s cut (Victor Romeo’s “Love Will Find a Way”), the compilation lands on the anthemic pulse of “House Nation” from the aptly named House Master Boyz. From there, the music dives into late ’80s/early ’90s deep house cuts from Vincent Floyd, Mike Dunn, Da Posse, and Paul Johnson (who appears here as part of the group Club Style), all of bear a striking resemblance to the mid-’90s output of New York’s Strictly Rhythm label. Toward the end of the disc are some of the most musical tracks of Dance Mania’s catalog; they fittingly come from Parris Mitchell (under the aliases Victor Romeo and Rhythm II Rhythm), who first developed his chops as a funk and soul musician while playing disco sessions and touring with R&B groups such as Club Nouveau. As he explains, “I was making house records from a musician’s perspective.”

If the first half of Hardcore Traxx is intended to showcase the label’s classic house cuts, the second disc largely highlights the label’s mid-to-late ’90s sound, which essentially focused on pumping house of all flavors. Whether it was acid, ghetto, deep, or something else, the tunes were being turned out by the likes of DJ Funk, DJ Deeon, Traxmen, Jammin Gerald, and countless others. The selection of songs here is interesting, as it ranges from obviously necessary cuts like Paul Johnson’s “Feel My MF Bass” to classics like Traxmen & Eric Martin’s “Hit It from the Back,” but also throws in a few seemingly random tracks, like the rarely heard deep techno of Tim Harper’s “Toxic Waste.” DJ Deeon is actually represented with two tracks, the first being “The Bomb,” which showcases his charismatic rapping, while the second is a more unlikely choice, the acid workout “Hypnosis.” This kind of juxtaposition is unusual, but it also highlights what is frequently overlooked about the Dance Mania label, the era, and the DJs who championed these records—it wasn’t just acid, or just ghetto house, or just anything. Sure, Dance Mania released jacking house, but it also served up ghetto house, techno, deep house, and, basically, whatever the artists wanted. Someone like DJ Funk might be thought of now as a master of ghetto house club bombs, but he also made acid tracks and stripped-back hard house. “Let Me Bang” might be DJ Deeon’s biggest anthem, but he also produced sample-based disco house and tracky techno. Simply put, Barney trusted the artists to know what would deliver on the dancefloor, and when considering the legacy of Dance Mania, it’s important to recognize that there was real diversity, not only in terms of the records, but also the DJs and the crowds that supported them.

Regardless of this fact, many people still consider Dance Mania to be the ghetto house label, but Barney sees it as so much more. “The selection on the compilation represents the label,” he says. “It had different phases, and ghetto house was just one of the phases. It evolved.” He’s also quick to say that he “had no idea the music would be received the way it is today” and at the time, he “didn’t think we were doing anything groundbreaking.” Barney also neglects to mention the trust and mentorship he offered the artists recording for the label, but Mitchell (who recorded for Dance Mania under several aliases) cites this as a key factor in its success and evolution. “The label was an open, creative environment,” he says. “You could bring [Ray] a record and he wouldn’t listen to it. He would just take it to get mastered.” According to Mitchell, that sort of trust was rare, and something he truly appreciated. “I was lucky. I actually had people that believed in me.”

Dozens of artists released on Dance Mania over the years, but when looking over the names featured on Hardcore Traxx and through the label’s extensive discography, it quickly becomes apparent that the label’s roster really did include a who’s who of early Chicago house. Contributors included Jesse Saunders, the man who many consider to be the originator of house, Farley “Jackmaster” Funk, Lil Louis, Marshall Jefferson, Mike Dunn, DJ Pierre, Armando, DJ Rush, Glenn Underground, Paul Johnson, Steve Poindexter, Stacy Kidd, and other, more obscure names that hover just below the surface.

At the same time, while Hardcore Traxx makes it clear that Dance Mania’s early records are certainly noteworthy, the imprint rarely gets much credit as a “classic” house label and its ’90s anthems generally grab most of the attention. After all, Dance Mania’s middle and later periods introduced the Midwest, and later the world, to DJ Funk, DJ Deeon, Jammin’ Gerald, Gant-Man, DJ Milton, DJ Slugo, DJ Nehpets, and DJ Clent—the top names of what came to be known as ghetto house, and later evolved into what is now footwork and juke. Parris Mitchell was one of the few artists that produced records in both eras of Dance Mania, and according to him, “the younger generation of Dance Mania are [the artists] who really made the label popular—the records were more consistent and they were fun to play.”

This notion still holds true today, as Dance Mania’s ghetto house-era records are the ones most likely to be heard in a club in 2014; a wide spectrum of artists, including Robert Hood, Nina Kraviz, Ikonika, and most of the Night Slugs camp, has been known to blend Dance Mania records into the mix. Furthermore, it’s telling that even though these tunes were made on low-tech equipment, and the records themselves are notorious for their poor sound quality, the tracks continue to sound incredibly fresh, which is likely why their influence hasn’t waned over the years. Fans of the label often point out that Daft Punk’s early work was clearly inspired by Dance Mania; the legendary French duo even credited some of the label’s artists on the Homework classic “Teachers.” More recently, Kraviz made a tribute in the form of “Ghetto Kraviz,” one of Jam City’s first offerings to pick up steam was a rework of DJ Deeon’s “Let Me Bang,” and L-Vis 1990 just enlisted Jammin Gerald to contribute to his new Dance System EP. Truth be told, many of these modern productions lack the sort of rawness that characterized Dance Mania’s heyday, but they’ve all demonstrated some genuine dancefloor potency nonetheless.

If there’s any fault to find with Hardcore Traxx, it’s that there isn’t more of it. While the curation does an excellent job showcasing more than 11 years of releases with just 24 songs, it’s hard not to mention so many other tracks that could have—and perhaps should have—been featured. Surprisingly, some of the biggest songs released by Dance Mania, including cuts that truly defined the ghetto house genre, simply aren’t included. Examples include DJ Deeon’s “The Freaks” (amongst many of his other songs, under multiple aliases), Jammin Gerald’s “Biggie Trax” and “Work Dat Shit,” and DJ Nehpets’ “Lay It Down.” That said, even if several more double-disc Dance Mania collections were released, it’s unlikely that the label’s vault of classics would be completely exhausted. As such, we can only hope that Hardcore Traxx is just the first of many Dance Mania compilations to come.