Deep Inside: Pantha Du Prince and the Bell Laboratory ‘Elements of Light’ 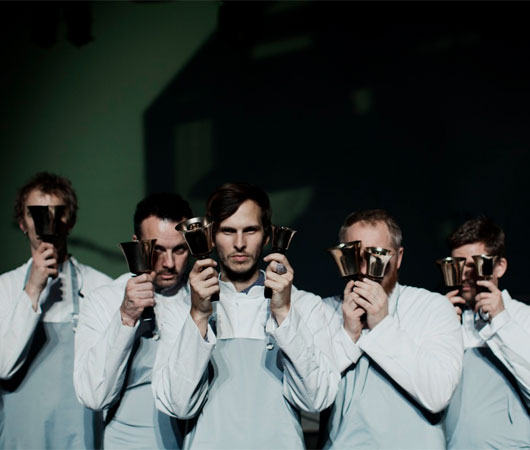 Deep Inside: Pantha Du Prince and the Bell Laboratory ‘Elements of Light’

Sometime in the summer of 2010, Hendrick Weber (a.k.a. Pantha Du Prince) was eating lunch with some friends in Oslo when he first heard the cacophonous tones of the carillon. Originally of ancient Chinese descent and later adopted by Europeans in the Middle Ages, the carillon is a towering instrument which incorporates at least 23 (but often up to 50) bronzed bells. Shaped to various sizes, the bells are played with a series of keys and foot pedals, not unlike a traditional pipe organ. Hearing the carillon during one of its daily “concerts” from within the Norwegian capital’s city hall, Weber was struck by the rich interplay of resonances and unpredictable overlapping of frequencies, so much so that—with a little encouragement—he decided to build an ensemble and ultimately an album with the massive instrument as the centerpiece. The result is Elements of Light, a record that places Pantha Du Prince’s efficient electronic productions within a world of melodious clanks and highly orchestrated live percussion; it’s also the German artist’s most ambitious undertaking to date.

In truth, it seems safe to say that Weber has always displayed an affinity for bell-like tones in his music. For instance, his definitive Black Noise LP often placed vaguely melodic percussive sounds at the forefront of its tracks, along with memorable patterns of chimed notes and crystallized melodies. In that sense, incorporating the complex bell tones of the carillon was a logical progression, but not one that Weber initially knew exactly how to bring into his work. Eventually, he decided that it was not enough to merely record and sample someone playing a carilion, but he wanted himself—and an audience—to be able to interact with the enormous and antiquated instrument. More importantly, he wanted listeners to understand that these tones were not born of a piece of software, but an instrument weighing well over two tons. Somewhere, the concept became obvious to Weber, “I was suddenly like, ‘Okay, this is the idea: bring the fucking bells to the people on the floor and we’ll make them dance to the bells.'”

The compositions that led to the live ensemble performances and ultimate recording of Elements of Light began, as most of Weber’s productions do, in his computer. “I had the whole piece in my computer as a normal Pantha Du Prince track, 40 minutes long,” he explains. While the material was put together with the intention of being presented as one congruent piece, Weber is quick to point out that he did not write a 40-minute composition for the ensemble straight from beginning to end, but rather threaded together a number of smaller works to form what he refers to as a “patchwork” composition. To take the songs from his computer into the real world, Weber enlisted Norwegian composer Lars Petter Hagen, who translated the work into instrumental arrangements and helped form an ensemble of Oslo musicians who would perfrom the piece alongside Weber. “I found a composer and all these people that were really enthusiastic about working with bells,” says Weber, “and when we began to put together an ensemble, all these musicians popped up who had been collecting [bell-related] instruments.” As part of the process, the two discussed incorporating a slew of similarly melodic yet percussive pieces into the works, including xylophones, tubular bells, marimbas, chimes, an aluphone, and other bits that could be played live by the ensemble musicians.

The live touch within Elements of Light is apparent from its first moments. A slow pattern of bells is hand-played on top of itself to open the LP, the long decaying tones modulating each other into waves of ghostly metallic resonance. From there, opener “Wave” seamlessly morphs into “Particle,” the record’s first full production and a track which spends over 12 minutes introducing and bringing together—almost piece-by-piece—the entire spectrum of the ensemble. One pattern of struck melody is engulfed by another while the long, full tones of the carillon are given room to breathe underneath, their constant droning presence (possibly a result of Weber’s manipulation) ringing just beneath the surface. Almost four minutes in, a familiar sound interjects—dry, minimal drums. At first there’s just a kick, but eventually, a procession of miniature shakers and claps, as well as a rounded bassline precisely matched to the carillion pattern, push the track forward. The patterns continue to revolve and methodically build for a period before Weber suddenly allows the track to loosen, moving into an almost tribal array of free percussion while its more melodic elements start to peel away, anchored by the steady four-on-the-floor programming. “I wanted the musicians to have some freedom,” tells Weber. “I told them to do variations and play wrong; play wrong at the right time. Not make it too perfect, so it’s not strict like a minimalist composition.” This balance between control and freedom is what gives the record its natural movement, and the preciseness with which the different pieces of the composition are built, executed, and consequently unfurled are what allow for the extended track lengths of “Particle” and the 17-minute long “Spectral Split.”

Elements of Light is a record that values the detail and depths of its sounds as much—if not more so—than its musical content. The instruments lend themselves to an immense array of dynamics and constantly changing textures, and when weaved over each other, they make for a richly complex sonic landscape. “I’m interested in sounds that can tell a story more than any melody,” says Weber. “If you put a sound at the right place at the right time, it can tell so much.” The story the sounds tell here, according to Weber, is one of many layers. The history of the carillon and the omnipresence of bells in the Western power structure are certainly part of that narrative. “It was always a symbol for power,” says Weber of the bell, “and used as an instrument to put people in a specific mood and control them.” At a certain level, Weber admits he sees the record as a way to “bring a power instrument down and put it on a dancefloor.” Still, on a different level, Elements of Light was also a way for him to examine the city of Oslo—a place he has found himself captivated by over the years, although he has never lived there. Pulling not only his inspiration but also his ensemble from the fabric of the Norwegian capital—the carillon player he first heard in Oslo was recruited to record on the album—Weber wanted the music to in some way reflect his impressions of the European city. “I was thinking it would be nice to have this virtual map of the city where you have this one piece of music and every street almost has its own sound,” tells Weber. “It’s a very special situation [in Oslo] because the city is in a valley and a harbor, so [I wanted] the sound to have that same geographically specific resonance as the place [it represented].”

No cut on Elements of Light lends itself to this sort of auditory storytelling more than “Spectral Split”—the almost 18-minute piece which serves as the album’s climax. Again, the composition builds in patient steps; a cascading ring of bells and accompanying percussion coalesce into a joyous mess of melodic clatter and heavenly drones, held together by the steady thump of a breathy kick drum. Meanwhile, the textures on “Spectral Split” are increasingly vivid and warm. The nuances of the hand-played acoustic instruments give the song a palpable sense of urgency, while dusty electric piano and rounded bass rise in sync with a rich synth arpeggio. Though it may not have been Weber’s focus, the melodies which appear amidst this collection of organized noise are what make the story “Spectral Split” outlines so relatable, the simple notes surfacing on top of the mass of textures every so often to give the track just a touch of a hook. The listener is left to wait past the 13-minute mark for the song to reach its sonic peak, and the control with which the ensemble builds toward this ultimate reward—something it does well across the entire album—is what allows for the track to not feel tedious.

Like the opening effort “Wave,” “Quantum” closes the record with a drumless composition, effectively bookending Elements of Light whilst fully immersed in Weber’s bell fascination. Pantha Du Prince and the Bell Laboratory is by no means the first or only project to indulge so heavily in the ornamental pings of percussive bell melodies—Four Tet has surely made them a regular part of his repertoire, and the marimbas, xylophones, and glockenspiels often heard in Steve Reich’s work have an undeniable influence here—but it is hard not to admire the dedication with which Weber and his ensemble pursue this infatuation. The project certainly demonstrates a level of conceptual commitment that’s rare in much of modern dance music. According to Weber though, it isn’t the rich tonality or the familiar timbre in particular that drew him to the bells, but something simpler. “It’s an empty sound, so it is very free [of influence]” he says. “It’s not used in any certain style, it’s not connected to any fashion, it’s just an ancient sound that has always been there.”