Deep Inside: The Haxan Cloak ‘Excavation’

Excavation, the second album from London-based sound designer and multi-instrumentalist Bobby Krlic (a.k.a The Haxan […] 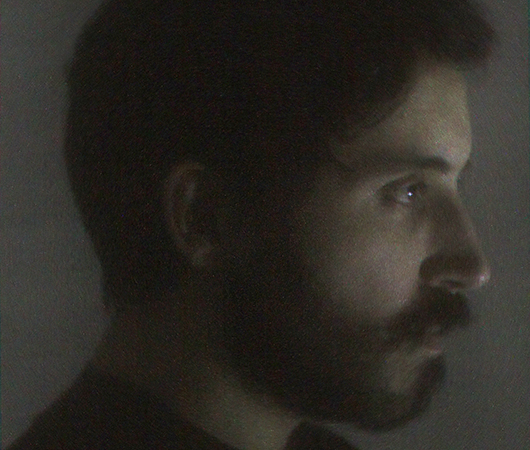 Deep Inside: The Haxan Cloak ‘Excavation’

Excavation, the second album from London-based sound designer and multi-instrumentalist Bobby Krlic (a.k.a The Haxan […]

Excavation, the second album from London-based sound designer and multi-instrumentalist Bobby Krlic (a.k.a The Haxan Cloak), is both a direct continuation of its 2011 predecessor and also its polar opposite. Thematically, where The Haxan Cloak was a descent into darkness, Excavation represents the ascent into light that directly follows it. The differences between the two LPs run further than their mood and themes, however; for this second album, Krlic has flipped his approach to composition and sound design on its head. Where his debut was rooted in the raw, natural tones of classical instrumentation, its follow-up deals in electronic timbres and heavily processed effects. As such, Excavation shares many traits with its predecessor while still sounding like a unique proposition; here, Krlic makes no attempt to repeat the tricks of his debut, and creates a hugely worthy successor to it as a result.

The differences between the two albums are unsurprising, given that Krlic approached the composition of each in completely opposing manners. While the narrative behind the The Haxan Cloak evolved slowly out of Krlic’s musical experiments, Excavation found him building each track with a clear idea of the concept in mind. “With the first album, I didn’t really know what it was about until it was finished,” he explains. “When I was assembling it, this narrative sort of appeared. It was basically about a character’s descent towards death, which is why it ends with that requiem with the choir and things. The new one starts at exactly the position the last one finished, so you could literally put them back-to-back and there’s not a gap. So it’s a continuation of that story really. It’s not anchored to any particular place—I’m not saying it’s heaven or hell or an afterlife—it’s just this person’s journey, their departure from the earth and into another existence.”

This shift in concept manifests itself most obviously in the difference in mood between the two records. While Excavation is still hardly an exercise in easy listening, it feels far less imposing than its predecessor did; where, on The Haxan Cloak, Krlic created a sense of ever-impending doom with thunderous waves of stringed instrumentation, the soundscapes now feel more understated and less urgent. Where last time there was an immediate darkness to each of the tracks, the bulk of the new album is made up of sounds that create a subtler sense of vague unfamiliarity. This shift is achieved by a radical and instantly obvious change in instrumentation. For example, as with “Raven’s Lament,” the first track from his debut, album opener “Consumed” is based around a slow build of tension, yet where last time this was achieved by the recognizable sound of tense orchestral strings, Krlic instead confronts the listener with an abrasive, alien-sounding filtered synth line.

According to Krlic, however, creating these sounds was about more than just trading the strings for synthesizers. “It’s not just about the instrumentation,” he says. “It’s about my role within the project. With the first one, it was more about me being a player and a composer, so while obviously there was a computer involved, I didn’t really want that to affect things too much. I wanted to nail things in one take as much as I could, whereas this record saw me taking more of a sound-designer role.”

To achieve this, Krlic prepared for the album’s creation by decamping to a recording studio in the quaint British town of Snape, in order to build a library of sounds that he would use to piece together Excavation. “I made a massive bank of recordings with loads of orchestral instruments and gongs and timpani things,” he explains. “Then I just took them home and played around with them until some rhythms and textures and stuff started to fall into place. It’s really surprising to people to find out how much of it isn’t actually electronic instruments—there are a lot of field recordings and acoustic recordings that have then been treated electronically and all the sounds have sort of been broken down and rearranged.”

This desire to separate the finished sounds of Excavation from their natural origins is closely linked to theme of ascension that runs through the LP. “With the first one, it’s very much instruments that anchor it to the earth—violins and traditional drums and cello and whatever,” he explains. “With this one, I kind of wanted to flip it on its head and take it somewhere else. I wanted to detach it from everything really.”

While ‘cinematic’ is a term that gets kicked around a lot in relation to ambient and instrumental music, it feels particularly relevant to The Haxan Cloak’s work. Excavation is an album that demands to be consumed in its entirety from start to finish, but it also really comes to life if the listener is willing to invest in the narrative ideas that support it—the contrast in sounds between this LP and Krlic’s debut, and the shift of textures from the menacing immediacy of “Consumed” to the more passive and ethereal nature of 12-minute closing track “The Drop”.

The cinematic nature of the project is no coincidence—Krlic openly admits that his ultimate goal is to produce film soundtracks under the Haxan Cloak moniker. As such, it’s little surprise that visualization plays a key role in his composition process. “A lot of working on the record would involve sitting down and getting into character—imagining what this character’s doing, what he’s thinking about, what he’s seeing,” he explains. “Then taking the sound recordings and filtering them through that lens until it starts to sound like what I would be envisioning in my head.”

He describes this process as something like ‘guided experimentation’—painting with the texture of his recordings and electronic sounds around a visualized framework. “Sometimes I find it helpful, if I’ve got a certain compositional idea in my head, to draw it out,” Krlic explains.”I’ll draw peaks and dips and little symbols to help me imagine what it might sound like.”

Structurally, Excavation flits between shorter tracks that create instant mood-setting tension—such as “Miste,” with its surprising bursts of dehumanised voice, or the industrial “Dieu,” which sounds like Vex’d at its most atmospheric—and longer pieces that unfurl at a slower, meandering pace. At the LP’s heart is a pair of two-part tracks, “Excavation” and “The Mirror Reflecting,” which each reveal their moods slowly over the the course of their 10-plus-minute durations. “They were both written as two massive long pieces, but then I noticed within each of them that there was this big dynamic shift that occurred,” Krlic explains. “It just made sense to me to have them as two parts. I think both parts do exist as one song, but each says very different things. I think they both could exist in their own right as well, so I felt it was an important thing to put a divide in there. The other thing is, I just didn’t want an album that was only five tracks long.”

Ultimately, Excavation feels like a less immediate record than Krlic’s debut. The changes to his compositional approach have had the audible result of creating an album based around gradually evolving textures as opposed to the recognizable orchestral drama of his debut. What it lacks in immediacy, however, is more than compensated for in depth and maturity; it’s an album that seems to only reveal its true nature through patience and repeated listens. Placing this album and its predecessor side-by-side not only cements the notion that Krlic has compositional skills that surpass many of his peers in the UK right now, but also makes it clear that he’s developing and progressing as a musician in positive directions. In short, as sophomore moves go, Excavation is hard to fault.