DJ Sega: Rollerskatin’ and “party” hatin’ with the youthful progenitor of the Philly club sound. 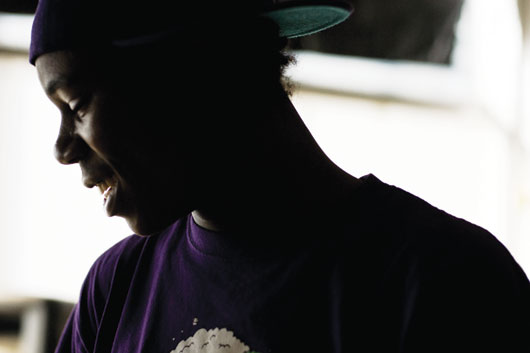 DJ Sega: Rollerskatin’ and “party” hatin’ with the youthful progenitor of the Philly club sound.

DJ Sega hates party music. Not the music it refers to—in Philly that’s what they call Baltimore club—but the term itself. The 22-year-old Mad Decent affiliate, a quasi-folk hero among the teens who congregate at party music hub Jamz Roller Rink on Friday nights, prefers that you call his sound “Philly club.” The gesture is an homage to both Baltimore and Brick Bandits, the Newark, N.J.-based DJ crew that dubbed its own variation on the sound “Jersey club.” (Sega is a founding member of the collective’s adjunct Philly chapter.)

“When I came across club music, I fell in love,” says Sega (a.k.a. Robert Taylor, Jr.), wistfully recalling his first exposure to 2 Hyped Brothers & a Dog’s “Doo Doo Brown” as he plays a game of Frisbee golf at Philly’s Fairmount Park. “It was totally unexplainable. I like to instill [that feeling] in everybody else.”

Sega’s own music could be described as a hybrid of B-more true-schooler Rod Lee’s loose, kitchen-sink aesthetic and the crisper, more polished sound of Jersey producers like DJ Tameil. For all of his loyalty to club’s pioneers, though, releases like this year’s New Jack Philly find him toying with the genre’s boundaries while remaining within its rigid sonic grid. “Colours,” his contribution to last year’s Brick Bandits EP (a six-song compilation released through Ol’ Head, a label recently started by Sega and fellow Philly club DJ “Dirty South Joe” Massarueh), might be one of the smoothest club jawns ever made. Built from a sample of Janet Jackson’s “Rock With U” and a robot voice from an unreleased Vengaboys song, it’s practically chill-out music—at 133 beats per minute.

“When club first came out in Baltimore, it was fight music and then it was fuck music,” says Sega. “It feels overwhelming to even say this, but I feel club is kind of evolving in my own hands.”

Sega, whose baby face makes him look about 16, credits his DJ father and his mother’s collection of dance music maxi-singles for shaping his musical DNA. “Every weekend, my mom would get a couple of singles, and she’d have it on repeat all day and we’d never get tired of it,” says Sega. “I guess that’s where I get my ideas on remixes. I love to make somebody’s favorite their favorite all over again.”

Having reconfigured everything from Capleton’s “Everybody Needs Somebody” to “The Magical Amount” song from those annoying anti-cigarette commercials, he already has a catalog so deep that his DJ sets now consist entirely of Sega originals.

“The best thing you can do is Google me everyday,” he suggests between Frisbee tosses. “I got a lot of ideas and I’m gonna try to get at least half of ’em out before I die.”

New Jack Philly is out now on Mad Decent.