“I never ‘discovered’ grime,” DJ Elijah, one half of the Rinse FM DJ team Elijah […] 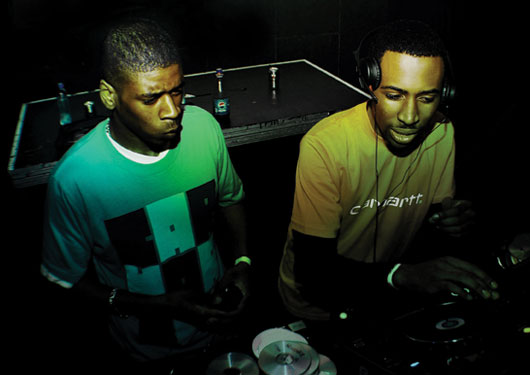 “I never ‘discovered’ grime,” DJ Elijah, one half of the Rinse FM DJ team Elijah […]

“I never ‘discovered’ grime,” DJ Elijah, one half of the Rinse FM DJ team Elijah & Skilliam, assuredly states. “I’m from East London—I was born into it. Everyone used to listen to pirate radio at school and have tapes; it was more of a taboo if you weren’t into it.”

London’s grime scene has never been a particularly open one. Rarely leaving its East End breeding ground, it’s also been notoriously locked from the inside, with impossibly high barriers. “Grime is so insular, the scene is like a big family—you have to be brought in by someone,” says Elijah. Along with Skilliam, the first-names-only pair, most often heard on their high-energy Thursday show on Rinse FM, got their in from the scene’s godfather, Terror Danjah, who ended up helming the first release on their Butterz imprint, in March of last year. “I think everyone associates grime with Playstation-type beats, and Terror Danjah’s not that at all,” Elijah explains. “He’s got a real polished sound, but he’s still got the edgy styles and edits, and his drums are just crazy. It’s not what you think it’s gonna be, if you think grime’s some child’s music.”

Since their Rinse debut in late 2008, Elijah & Skilliam have been instrumental in grime’s recent evolution, repopulating it from a hyped, MC-filled landscape to DJs and producers standing tall on their own. “In grime,” Elijah explains, “if MCs like your beats, you’re considered the best producer. A lot of the stuff that we’re into is not always easy for an MC to sit on. SRC is one of them people, for instance.” That’s true; it’s hard to imagine any flow working atop SRC’s winding 8-bit melodies on ‘Goomba VIP,’ from the multi-artist Quality Street EP, the label’s second release. All Butterz artists (an army that includes Swindle, D.O.K., TRC, Mr. Mitch, and Royal T) step with precise swagger from a different corner of UK bass culture, melting together disparate sounds to create slamming, unpredictable grime anthems.

Though they’re “not on any sort of ‘takeover’ vibe,” Butterz has quickly spread all over the globe. “We’re just doing what we like doing,”says Elijah. It’s no wonder the music world is hanging on their every beat, when each move is pressed with bright artwork (from teenage designer David Kelly) that’s as distinctive and crisp as their sound. “If it was regional, it wouldn’t be feasible. That’s the motto,” says Elijah. “We sold nearly 200 Butterz t-shirts with our last run. The mad thing is, guess how many of those sales were from London? 13!” Merch is flying out of the Butterz shop, which sells everything from their highly sought tees to something rarely seen on the grime radar: vinyl. “If we’d chosen to do the label digital, people wouldn’t even check for it—there would be no value in it,” informs Elijah, while packing their latest batch of clear vinyl. “For us, because we go through so many tunes, how would we differentiate the upper-level quality from the bog-standard tune? We had to separate the men from the boys.”