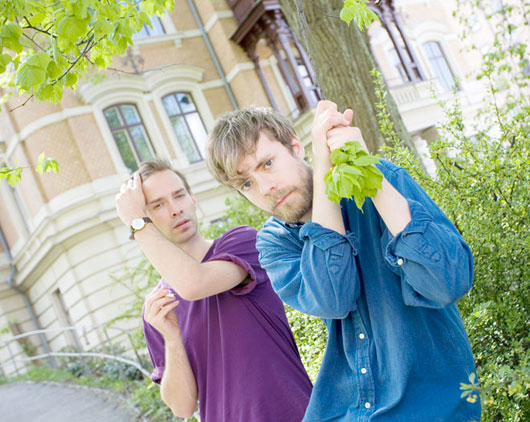 Joel Karlsson and Henrik Markstedt, the 29-year-olds that comprise Swedish pop duo Air France, and I are talking about their fans’ mounting anticipation behind the band’s forthcoming, as-yet-untitled LP. “I think it’s a little bit too late,” says Karlsson. Like the momentum from their last gloriously breezy EP, 2008’s No Way Down, has died? “Yeah, a little bit,” he says. “We will see.”

“There’s always rumors,” Markstedt interjects. “There’s this big thread on a forum on the internet [discussing the new album], and it’s like, ‘I heard it’s coming this winter!'”

Karlsson jumps back in: “But everyone is like, ‘I fucking hate that band! I hate them so much! Why can’t they fucking release the record?!’ People are so angry. We went to Poland, and I saw on a forum that people were like, ‘Don’t come here before you release your fucking record!’ That makes me feel welcome!”

Truth is, this conversation happened six months ago (on the tail end of a trip to Scandinavia for Oslo’s By:larm Festival), and now even more time has passed—still with no LP. But last week, a track from the pair finally surfaced, which, Markstedt tells us by email, will hopefully be the lead single from this elusive debut full-length. “It would be wonderful if we do manage to finish the record without killing each other, though!” he adds. Ironically, the track is called “It Feels Good to Be Around You,” but presumably it’s not about their appreciation for one another.

But, who knows? Markstedt and Karlsson have been known to pull their fair share of jokes. In fact, on the day that they met me at Hotel Royal in their home base of Gothenburg back in February, they arrived wearing matching cream cable-knit sweaters with chambray shirts buttoned up to the neck, which they insisted—deadpan—was unintentional. And when we sat down to lunch at a nearby Indian restaurant, as some random fusion-jazz track played from the speakers above, Markstedt kidded, “Obviously, someone has illegally downloaded the new Air France album.”

Not that people probably aren’t trying to, even if said record doesn’t exist yet. To be sure, if the web release of “It Feels Good to Be Around You” is any clue, the band has grossly underestimated its own popularity. To date, Air France, after being together for five years now, has only put out two EPs and a couple of singles, all on Gothenburg label Sincerely Yours, run by The Tough Alliance’s Eric Berglund. The band’s blissed-out, Balearic pop sound, which the duo has admitted is strongly influenced by St. Etienne and other British dance and R&B acts (they even yanked lyrics from Lisa Stansfield for their sunny “Beach Party” tune back in 2006), seems to appeal equally to indie rock fans and post-ravers looking for a calming antidote to beat-oriented tracks. And it’s hardly surprising given what they’re into.

“I’m really into the music that you hear today at clubs and on blogs,” says Karlsson, who’s recently taken a liking to Jamie xx and xxxy. “I spent the years between 17 and 23 just listening to the history of rock music, and I think I just wanted something else,” he says of his interest in electronic music. But raves were never part of the equation. “We had this friend who always went to raves up in the woods,” Markstedt explains. “And he took Viagra and had sex all night, but I was too sensitive [to go]. He asked me a bunch of times to come, and I wanted to so bad, but I was too scared.”

That said, they do see the new album, which, as of February, had about eight tracks completed, as a bit of a departure. “The other one sounded more organic, with flutes and things. I think the new record will sound more ravey, like plastic,” says Karlsson. “I wish we could be faster with it and the writing process,” he continues. “We are quite slow. I don’t know why.”

In true Air France form, one always has a witty quip when the other trails off: “Because we are quite bad!” Markstedt finishes. “We don’t know any chords so we have to, like, build it. Like, make maps for different chords [laughs].

“That’s not true,” Karlsson objects. “We can play if we want, but if someone said to us, ‘Play A,’ we don’t know what A is. I think the new record is quite a bit like we are. We’re trying to experiment with new rhythms, because we’ve been listening a lot to music from England, like dubstep and garage. I don’t want to do a record like before. I want a new sound, but have Air France in it. I don’t want to repeat myself.”

The new record, which is being produced primarily with Cubase and Reason, is said to feature a couple of vocalists, and the single, “It Feels Good to Be Around You,” was mixed by Manchester producer/remixer Star Slinger. “Hopefully it will be more aggressive, but still pretty,” Markstedt offers. “The sensitivity must remain, but I hope we can be more direct.” There’s also a plan to tour at some point, though that seems even further into the future than the record’s actual release.

“We played live once,” says Karlsson. And how did it go? “Bad! The electrical guy pulled the plug after a song and a half… It was at a festival; it was really small and indie, with little kids running around. We invited our friends up, and after two songs it was like chaos.

“It’s so strange that you have to be a good live band and a good band on record, too,” Karlsson muses. “I think one of the reasons why we don’t do live concerts is to try to make people think that we don’t really have to do concerts, but people don’t reflect in that way.”

“I think it comes down to [the fact that] we’re not that good of musicians,” admits Markstedt. “We don’t want to do this playback thing, and just press play and sing over top… which is what we’re gonna have to do anyways [laughs], because I don’t see how we can do it otherwise.”

Karlsson’s plan, if he has to have one, is a bit more whimsical. “I want to have a painter sitting on the stage painting a picture, and I want someone trying to connect with the audience in some way… a very psychedelic concert [laughs]. I want people to be like, ‘Was that a concert? Like, have they played?'”

“‘When are Air France playing?'” Markstedt asks in a mock tone, before his partner responds: “‘They just played!’ We are an arty band!”

Air France’s LP is expected sometime later this year. To celebrate the release of their new single, they’ll be serving breakfast sandwiches this Saturday, August 13 at noon at Gothenburg’s Skansen Kronan. Thanks to VisitSweden and Hotel Royal in Gothenburg for assistance in making this piece possible.