Faktoids and Fiktoids – 10 Things You Need to Know About Dopplereffekt

Earlier this month, mysterious duo Dopplereffekt re-emerged with Tetrahymena, a new EP for the Berlin-based […] 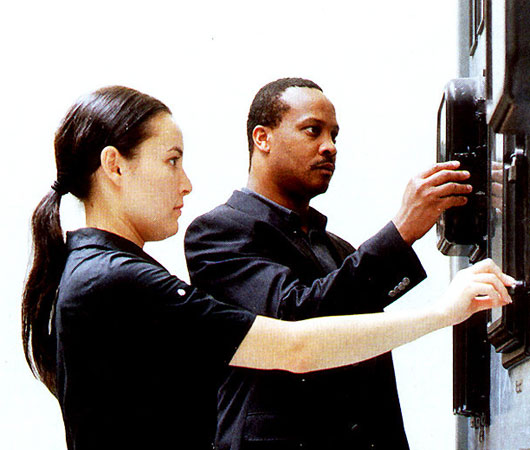 Faktoids and Fiktoids – 10 Things You Need to Know About Dopplereffekt

Earlier this month, mysterious duo Dopplereffekt re-emerged with Tetrahymena, a new EP for the Berlin-based […]

Earlier this month, mysterious duo Dopplereffekt re-emerged with Tetrahymena, a new EP for the Berlin-based Leisure System label and the outfit’s first release since 2007’s Calubi Mau Space LP. Needless to say, we were pretty excited to hear new music from the famously press-shy pair, and although nothing has been announced just yet, there are rumbles that more of the duo’s klangy rhythms, ambient acid, and strangely elegant electro is on the way in the months ahead. Given that, we figured that Dopplereffekt was overdue for a bit of re-examination, so we’ve retraced the group’s path from its Detroit roots to the present and have put together 10 pieces of essential information to help get everyone up to speed.

Dopplereffekt founder Gerald Donald was a key figure in ’90s Detroit techno.
In truth, that’s probably an understatement, as Donald was involved with two other seminal, deep and dark Detroit projects at roughly the same time Dopplereffekt was formed in the mid 1990s: Drexciya, with musical partner James Stinson, who died from heart failure in 2002 at the age of 32; and Ectomorph, with Brendan M. Gillen (who continues to produce, promote, and DJ under the name BMG).

Donald and Stinson were rumored (but never confirmed) to be part of a Flint, Michigan-based cult-electro project called Elecktroids.
The 1995 full-length, Elektroworld, was released on Warp. The first issue on vinyl is coveted by collectors, and is now fetching about $150.

Drexciya came from Detroit’s east side.
It may seem trivial, but that side of town is more often associated with hip-hop and funk. That’s because of artists like Eminem, J Dilla, Amp Fiddler, and Platinum Pied Pipers, although raw house dog Omar S is also from the east. The city’s west side produced techno and house artists Carl Craig, Anthony “Shake” Shakir, Delano Smith, Norm Talley, Jeff Mills, and many others.

The first three Dopplereffekt mini-LPs stand up as pure electro classics.
The records were released at a rate of one per year from 1995 to 1997, and the first two contain club “hits” like “Pornoactress,” “Superior Race,” and “Sterilization (Racial Hygiene and Selective Breeding).” Ideologically and psychologically messy, the titles and the group’s lipstick-and-makeup image (see below)—which was clearly a reference to Man Machine-era Kraftwerk—helped brand Donald as the scene’s most oddly devoted and eccentric Germanophile.

Gesamtkunstwerk is the closest thing Dopplereffekt has to a “desert island” release.
Issued on International Deejay Gigolo in 1999, it compiles most of the group’s ’90s output and contains many of Dopplereffekt’s essential tunes.

A entertaining video showing the publicity-shy group “performing” the track “Scientist” in white lab coats was released to help promote Gesamtkunstwerk.
Grainy but good, the droll clip was oddly compelling with its retro-futuristic, black-and-white ordinariness.

In the late ’90s, Donald launched a solo endeavor called Japanese Telecom.
The project debuted with a self-titled full-length in 1999 on suburban Detroit label Intuit-Solar. The imprint went on to have a productive four-year run, releasing product by Dan Bell, Ectomorph, Anthony Shakir, DJ Godfather, Detroit Grand Pubahs, and DJ Assault (including his seminal “Ass-N-Titties”). A second Japanese Telecom LP, Virtual Geisha, was released by International Deejay Gigolo in 2001.

At some point, Dopplereffekt moved to the pastoral German countryside, but no one seemed to know exactly when or where.
Along the way, Donald began to call himself Heinrich Mueller, and used the moniker while remixing The Hacker, Tuxedomoon, and others in the early ’00s. Eventually, the location of Donald’s/Mueller’s sonic experiments was identified as the Black Forest. (Editor’s note: Since the publication of this article, Dopplereffekt has publicly commented that the group resides in a “tranquil valley somewhere in the Alps.”)

Heinrich Mueller wasn’t the first or only alias to be used by Gerald Donald.
The names Rudolf Klorzeiger, Arpanet, Dataphysix, Glass Domain, Japanese Telecom, and Z Therapy also appear in various production credits over his 18 years of sound work. The identities of his Dopplereffekt collaborators have been equally difficult to pin down; early releases credited a number of participants, including Kim Karli, Helena Eichmann, Michaela To-Nhan Bertel, Rudolf Fisher, and William Scott. However, since 2007, no writer, producer, or band credits have appeared on the group’s releases, including the most recent EP.

Following Dopplereffekt’s six-year absence from recording, Tetrahymena does not disappoint.
On the EP’s title track, big bass drum thumps give way to bright sci-fi synths and hummably sinister melodies. The b-side begins with the downtempo, cinematic “Gene Silencing” and ends with the frantic “Zygote,” which seems to throw in a bit of everything Dopplereffekt has learned over nearly two decades of work. If this record is any indication, it appears that the marriage between Detroit and German electronics is steady, unshakable, and at its best when the music is deep, dark, and weird.