Five Minutes at ADE with Derrick May

If it wasn’t clear enough from bothparts of our ADE coverage, this year’s festival had […] 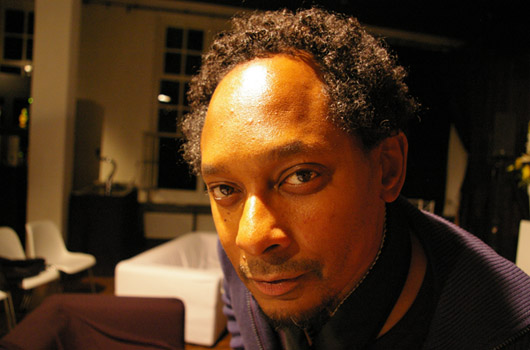 Five Minutes at ADE with Derrick May

If it wasn’t clear enough from bothparts of our ADE coverage, this year’s festival had […]

If it wasn’t clear enough from bothparts of our ADE coverage, this year’s festival had a far-reaching roster of artists, including some absolutely legendary names, of which the DJ, (former) producer, label head, and all-around electronic-music guru Derrick May was one of the biggest. At this point in his career, May really has a lot of knowledge to share, and he enthusiastically did so over two ADE panel discussions (one of which was a Q&A with fellow Midwestern pioneer Frankie Knuckles, who also sat down with us for five minutes) with a focus on the past and future of electronic music as well as the current state of dance music in the US. Once we finally got a chance to sit down with the man (who, by the way, will be bringing his Hi-Tek Soul tour with Kevin Saunderson to Seattle, San Francisco, and LA in early November), we continued to delve into these subjects.

XLR8R: What do you think has made it harder for US cities to have really substantial scenes in the last few years?
Derrick May: The fact that promoters are at a super small quantity. [Artists] are going to have to reach out and show the initiative to make their own gigs, like I did when I was younger. When I was first starting out, I did my own parties. If there was a party, I did it myself. But things can cultivate. Even myself, I need to go back and put something into my community. I can’t expect a flower to grow without water. I’ve got the water and I need to utilize the opportunity to help that flower grow.

Was there something that made the dance-music culture catch on more in other places than in the States?
It wasn’t a viable business venture for the American music market, so they simply turned their back on it. Canada, on the other hand, especially Montreal, has always had a dance-music culture. Toronto for quite a while had one, but things have changed there quite a bit, but you still can find clubs. Maybe it’s not your club of choice, but you can still find clubs. In the States, except for Chicago, San Francisco, and New York, the country’s dry.

So, you’re back in Detroit now?
Yeah, I’ve been back for a few years. But I’m on the road all the time, so I thought it would be a good thing to go back home and put some energy into that.

Does that mean you’re putting together parties and such there?
Not really. I’m going to start developing these things. Myself, Richie [Hawtin], Jeff [Mills], everybody’s gone. We’ve left it kind of high and dry, so we can’t hold anybody responsible for what’s happening in Detroit. It’s our fault.

And now you’re trying to give back to Detroit’s musical community.
Well, we have to, otherwise we’ll be responsible for what happens to the community. We will have fucked it up.

Do you think there’s a new generation in Detroit, guys like Kyle Hall, who are carrying the torch for the city’s music scene?
It’s not enough. Kyle [Hall] is one guy and he shouldn’t be responsible for carrying the torch. He should just be able to play his music and have fun. Rolando took a step back cause he didn’t want to be that guy. He just wanted to make his music.

Do you have any new projects in the works?
I am busy with trying to figure out what I’m going to be busy with.

And your label [Transmat] is still active?
Yeah, I started the label again. Greg Gow, DVS 1, John Beltran, and a few other upcoming releases is the plan.

How did you find out about new artists? Do you see them play clubs?
You know what, I don’t go to clubs anymore cause I live in this world, so when I’m not working, I don’t go out.

It’s no longer an escape for you?
Hell no. [Laughs] No way.

Then how do you find new music?
It’s genetic and impulsive for me. I find music and music finds me. It’s always going to be like that.