Last week, XLR8R was invited to Berlin to check out Berlin Music Days, a multi-day […] 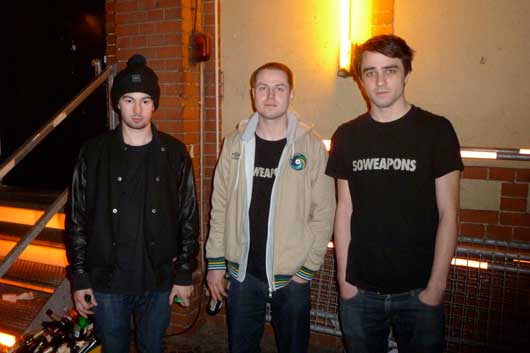 Last week, XLR8R was invited to Berlin to check out Berlin Music Days, a multi-day […]

Last week, XLR8R was invited to Berlin to check out Berlin Music Days, a multi-day festival celebrating the city and its rich electronic-music scene. Our complete festival wrap-up is here, but we also found a few minutes to chat with UK outfit Dark Sky, whom you may remember from the excellent podcast the young trio turned in for us last summer. Fresh off a long DJ set, Carlo Anderson, Tom Edwards, and (the rather quiet) Matt Benyayer sat down with us around 4:30 a.m. in the basement of a club and discussed their music, their influences, and their first impressions of Berlin.

XLR8R: Tonight you ended up playing for four and a half hours. Is that how long you normally play?

Tom Edwards: It was difficult, especially at the beginning. We had to pace ourselves. But it was fun. We got to play tunes that we’d normally never get to play in the club, so it was good to do it.

XLR8R: There are three of you, so do you normally trade off every song, every few songs?

XLR8R: So, how long have you guys been working together, and how did you meet initially?

CA: Two, two and a half years now I think.

TE: Maybe three. Matt and I went to school together, and Carlo and I met at a sound engineering college. It was during that time that we decided to start this project, Dark Sky.

XLR8R: But two of you had another project before this.

TE: Yeah, the Boogaloo Crew was Matt and I.

XLR8R: Was that a different sound?

TE: Yeah, the tunes we put out were very dubstep, 140 bpm, but the DJ sets were Baltimore club, with garage and dubstep.

XLR8R: When you started Dark Sky, was there a certain sonic idea?

TE: For myself, I had enjoyed doing the party sets, but after hearing new artists coming up, I wanted to do something different, a bit deeper, more experimental.

CA: [We were] just trying new sounds and seeing what happened. We never really intended it to become the main project, or for it to become as successful as it has. We just wanted to try something different.

XLR8R: Some of the first Dark Sky productions to surface were remixes. Is that where you started?

CA: We got a remix with The xx quite early on, through a friend of ours. I think, off the back of that, we got asked to do quite a lot of remixes. At the time, it was a good way of getting our profile out there to a new audience. Also, they were tunes that we either liked or thought we could do something interesting with. It was never an intentional thing, it’s just the way it happened.

XLR8R: Is that Kelis remix a bootleg?

CA: No, that’s official. I’m a huge fan of Kelis, I’ve been listening to her for years.

TE: We were like, “We can’t turn this down this is Kelis,” even though the original was…

CA: [laughs] It wasn’t as good as her other stuff. It was no “Millionaire.”

XLR8R: What was the first original Dark Sky track that came out?

TE: “Ghost Notes” b/w “Something to Lose.” That came out on Black Acre, a 12″. But the original plane was to do something with Picures Music, the Frames EP, but while we were constructing that, Ian from Black Acre got in contact.

CA: It’s all thanks to Fantastic Mr Fox. He heard some of our stuff on MySpace. He liked it and put in a mix. Off the back of that, he started playing it to Ian from Black Acre and, next thing we know, we got an email from him. It was really quite surprising because we really hadn’t been producing for that long at that point in time. It was very humbling because we were big fans of Black Acre—we still are—especially Fantastic Mr Fox, we were listening to his stuff quite a lot at that time.

XLR8R: How did you guys eventually link up with Blunted Robots and 50Weapons?

TE: With Blunted, we knew Brackles for quite awhile, from playing gigs with him. I’d also been talking to Shortstuff on AIM quite a lot, and just send him stuff now and again.

CA: [It was] the XLR8R mix from Scratcha DVA. He put “High Rise” on that, when it was still unfinished.

TE: “High Rise” was originally going to come out on another label. The guy was managing Brackles, but then Brackles [himself] came to us with a deal. It was going to be a split 12″ as well.

Matt Benyayer: I didn’t let that happen. I was like, “Come on guys, let’s dig deep.”

CA: Originally, I don’t think “Armour” [the b-side] would have come out.

MB: It was that pressure to make another tune that led to “Armour” being made.

CA: That was nuts. It was SBTRKT. He went on tour in America with Modeselektor, and he passed a load of our tunes on to them while they were on tour.

TE: We’ve seen videos on YouTube of Modeselektor dropping our track “Reflex.” Then SBTRKT introduced us to Gernot [from Modeselektor] on email, and he asked us just to keep him updated with our stuff. Then we were going to do a split 12″ with SBTRKT for 50Weapons, but this was just before his album was coming out, so he didn’t have any time.

CA: It was going to be “Speeding Blue” with SBTRKT doing another track.

CA: It just kept developing. It was quite nice the way that worked.

XLR8R: Moving ahead, do you guys plan to keep jumping around with labels?

TE: We’re just about to finish an EP for Black Acre, which will hopefully come out early next year. We’ve got plans to do another EP for 50Weapons. But we’re not set into one label at the moment.

CA: Eventually I think we’ll find a home for the majority of our stuff. We’ll still do stuff with other labels, but all the labels we’ve worked with so far have been absolutely fantastic. They’ve all done a really good job and we’ve felt very at home with all of them. Each label we’ve released with has felt like a bit of a family kind of vibe.

XLR8R: How do you guys feel about the scene in London?

TE: I think it’s very interesting. It’s always been quite interesting, but the way how it’s sort of evolved form dubstep into a whole house and techno influence. People like Boddika are a massive influence on us. You can get lineups with dubstep producers billed with house producers.

CA: It’s been mad the way it’s happened. Every few weeks there’s a new subgenre thrown out there and it’s hard to keep up. There are so many different influences going on, from techno to house to garage, classic dubstep—it’s all very mixed up at the moment.

XLR8R: Growing up, were you guys listening to mostly UK music—grime, dubstep, etc.?

CA: There were a lot of shootings as well at garage nights, so it got a really dirty name at one point.

TE: I was mainly just into hip-hop.

CA: I did the whole US hip-hop kind of phase, and I kind of grew into drum & bass. I was really stuck on that until about four years ago, when Tom kept on playing me dubstep. I was like, “No, I hate it. It’s terrible. I an’t stand it.” He’d play me a track and I’d be like, “Yeeeeah, not that great.” Then I heard “Oskillatah” by Skream and it completely changed my mind. I grew from there and slowly started getting into it. If it wasn’t for Tom, I probably wouldn’t be listening to dubstep.

XLR8R: You guys are here in Berlin for Berlin Music Days. Is this your first time playing in Berlin?

XLR8R: I realize you’ve only been here for a handful of hours, but what are your impressions of the city?

TE: You hear so much about Berlin, so we’re quite excited to be here, really happy to be here.