Five Minutes at Moogfest with Disclosure

This past weekend, XLR8R made the trek out to Asheville, North Carolina for the 2012 […] 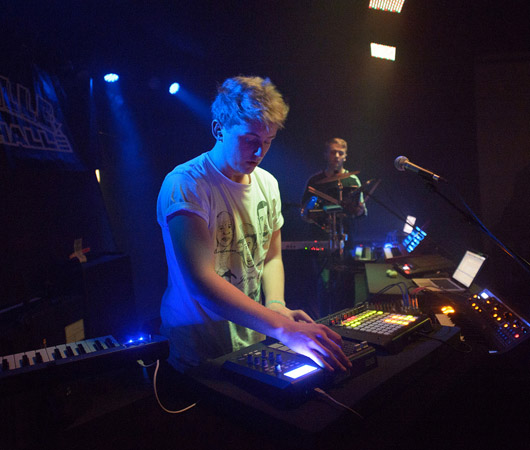 Five Minutes at Moogfest with Disclosure

This past weekend, XLR8R made the trek out to Asheville, North Carolina for the 2012 […]

This past weekend, XLR8R made the trek out to Asheville, North Carolina for the 2012 edition of Moogfest, which offered an impressive array of diverse talent across its two-day program. (Check out our complete festival review here.) One of the more buzzed-about acts to perform was young brotherly duo Disclosure, whose latest tune, “Latch,” has launched the group’s music far beyond its initial roots. The London-based pair landed stateside only a few days before Moogfest, so we took the opportunity to see what Guy and Howard Lawrence thought of the US so far and briefly chat about their recent success.

XLR8R: Is this tour your first time in North America?

G: Nice people, I’d say. Last night in Toronto was amazing, everyone was so nice. And the food is so good in the States, I’d definitely get fat if I lived here. [laughs] We’ve eaten so many amazingly good things, but they were also all really bad for you.

Howard: On the street we stayed at in Brooklyn, the only thing we could get was KFC. [laughs]

How long is your tour going to be?

Is there any place in particular you’re excited to play?

How did you guys end up with this live set? Has the amount of gear you use grown since you first started?

G: We’ve been playing out for about a year and our set-up has definitely grown a lot. We started off with more of an Ableton-based rig with one synth and a drum pad, and now we’ve got drum pads doing drums and vocal samples, an MPC, two keyboards, and a bunch of percussion stuff.

And that’s because it’s more fun to play all of those things?

G: Yeah, we just want to make it as visually exciting as we can for the audience. It’s not about having loads of gear on the stage that you just fiddle with. We want it to be a more visual experience, so if you’re in the back of the crowd and you see one of us hit the pad and you hear the sound, you know what’s going on, you make that connection. When you see someone just staring down at their gear, they could be doing anything or nothing at all. I mean, we have some of that because we have Ableton running the parts we can’t play—there are only two of us—but actions like playing the drums are the easiest things to grasp visually on stage.

H: As well as triggering the vocal samples. Not all of our songs have full vocals on them, so it’s nice to be able to play them on the pad and make them happen live.

How do you approach the vocals for your songs that feature singers in your set?

G: We just have it on Ableton, or we’ll bring the singers with us sometimes if they’re around. We have all the tracks on Ableton, so if they show up, we just turn those tracks down. [laughs]

And you guys do DJ sets as well?

G: That’s become more of a regular thing, especially because it’s obviously a lot easier to bring one bag of stuff rather than four massive flight cases.

H: It’s much less draining too. When we come back from doing a live tour, we’re dead for a week. Right now, we’re trying to calm down the shows a bit so we can write more music, but it hasn’t really happened so far.

G: But I love DJing, just as much as I love playing live. It’s so different, it’s a totally different task. When you’re playing live, you give the crowd so much that you’re going to get away with stuff, but with DJing I have to concentrate a lot more on the reactions of the audience. And we’re just not natural DJs—we only started learning how to do it two or three years ago.

You guys have toured with SBTRKT and Hot Chip, have you learned anything from those experiences?

G: Watching SBTRKT, we learned quite a lot. We’re not trying to copy him—I think our set-up is different—but I can see how he got to where he is with it, and it’s a direction we may go as well because I play actually play drums too. We usually play a bass guitar live as well, but we couldn’t bring it with us to the States. I think the thing is that if you’re a producer who can actually play instruments, you kind of owe it to your audience to play them something.

What are your plans after wrapping up this tour? Are you guys working on a full-length?

G: Yeah, “Latch” is the first single off it, and we’ve got two more singles ready to go.

And will it continue to be more vocal-dominated stuff?

G: We’re going to make it half and half, but the singles will definitely be more vocal oriented because it makes it so more people get it. But there will definitely be club tracks on there as well. We never want to stop making those.

And lastly, what are your goals for the next year or so of Disclosure?

G: I just want us to nail that record, get some good singles that can follow “Latch” up in a big way, cuz that’s just gone crazy.

You guys have been happy with that response?

G: It ended up being number 16 on the UK official charts—we never really planned that, we were just making a house tune that ended up being quite poppy. We just want to follow up with some stuff as strong as that, but we don’t want to lose touch with people who have been with us from the start, the people who found us on places like XLR8R and like our older, more clubby tunes—we’re not going to abandon those guys. Recently, we’ve been getting messages like, “Oh, you’ve gone so mainstream,” and all you can say to those people is that we’re still making exactly the same sound we always have, but now it’s just getting on the radio and actually doing well.