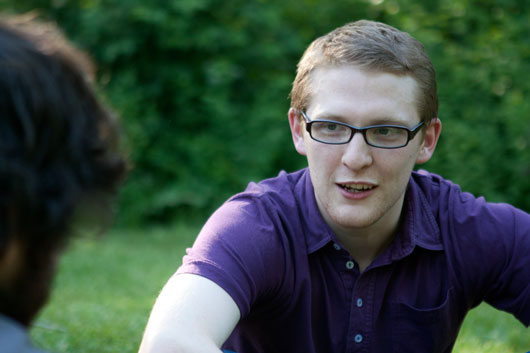 Amidst the hustle and bustle of this year’s MUTEK festival in Montreal, we snagged a few of our favorite artists for a quick chat about their impressions of the festival, the city, and, of course, some chatter about their music. Here, London producer and Eglo Records boss Floating Points breaks down his musical evolution, discusses his big-band aspirations, and sounds off on the myth of good poutine.

What are some of your favorite things about the city?
It’s a matter of hours that I’ve spent here, but it’s definitely not poutine. People keep saying, “This is the best poutine,” but it’s never good. I’ve never had good poutine. I’d like it if someone one day would show me decent poutine. Kid Koala has provided Four Tet with a map of where to go record shopping. So we had this map this morning, and we just were looking all over it. We went to some record shops and then went to the place that does poutine—baked. It’s not good! It’s really not good. And then there were some people behind us, who heard us complaining about the poutine and suggested some other place. So, I’m going through this cycle of poutine places until I find a decent poutine. By that point, I’ll have to have three British Airways seats.

Apart from poutine, it’s a very beautiful city. It’s very green, beautiful architecture, and the sort of mix of languages I always find amazing. It’s a bit embarrassing that my French is so bad that every time that someone talks to me in French—and I live so near France!—I always sort of respond with a “sorry.” What else… record shops are amazing. Record shops are really, really good here. It’s a very vibrant city, beautiful people.

It seems like jazz, funk, and soul plays a really important role in your musical perspective. How did that come about?
My appreciation of music, the stuff I listen to, has been really linear with the progression of Western music itself. When I was a kid, I was brought up on classical music and played the piano. I was playing classical music. I was also a chorister at cathedral and was really into European choral music—church music. When I got older, I started getting really into jazz. One of my teachers gave me three records. Chick Corea, [his band] Return to Forever, the Light as a Feather album, which I still think, to this day, would be one of my desert island discs. It’s just an incredible record. Then, Music for Small and Large Ensembles, by Kenny Wheeler. It’s amazing, I gave my copy away actually. There’s another one… but basically, there are these three records he gave me, and that was the beginning of my obsession with jazz. And where I lived in Manchester was really near record shops. Manchester back then was so good for buying jazz records. It was the cheapest way I could get the music—on vinyl. It’s not like I was well into vinyl or anything like that; it was just the cheapest format that I could get hold of jazz. My mom gave me a bit of pocket money or whatever when I was 12, 13 and I spent it all on jazz records. Dead cheap.

Then I got into soul and really into electronic music, but more from the Stockhausen, musique concrete guys and then into a lot of the British synth stuff. Then I got into techno and house music, but I was really late to all that stuff, like maybe 18 by the time I was really into house. I was even quite into drum & bass. I used to go to Black Market every day. When I moved down to London for university, the first gig I ever had, I won a competition to DJ at The End with Andy C. I won a competition, based on a mix. It was a baptism of fire. Suddenly I had gone from playing in my bedroom to playing at one of London’s most important clubs. It’s shut down now, but it was incredible. Then I started doing my own nights.

Do you have any plans to take the Floating Points Ensemble, the big band, on the road?
If someone pays for it, yeah. It’s expensive. There are 14 of us. And not only is it really expensive, it’s really hard to get them all in the room at the same time. They’re all professional musicians. They’re all really good friends from a long time ago. They really want to do it, as much as I do, but they’re all, like, super pro. They’re doing shows in London and running the jazz scene in London, basically. I’ve known them, some of them, since I was 11 years old.

I’m still doing my PhD. I’m so busy, so busy with university. I had to go from university to the airport to come here. It’s mega-stressful. But yes, eventually. I’m still doing my PhD and once I finish that, then yes, definitely. That’s what I want to do an album of, that [Ensemble] stuff. But before then I’m going to release an extended EP of my electronic stuff. I basically want to get them out of the way. They’re just tracks. I just want to get them out.

The Ensemble is the most important thing to me. We’ve been recording. A lot of the time, we record in my house, in my little studio. We try to get string players in there. We’ll put some of them in the kitchen, a couple of brass players in the corridor. It’s got a certain sound to it, but I really like the idea of recording an album in the kitchen. Homemade.

Do you have any plans to come to the US at some point?
It’s difficult for UK citizens. It’s very expensive to get a work permit, and very difficult. I really want to [come], but again, it’s university, and transatlanic flights. I’m in uni. I’m at the lab on a Sunday, and if I’m not doing a gig, I’m in the lab on Saturday. It sounds really dry, and sometimes, it really is. In a year’s time, when my PhD is over, bloody hell, I’ll move to LA. Or Chicago, Chicago’s got better records. [laughs]

For more about Floating Points at MUTEK, check out Part 2 of our festival wrap-up.