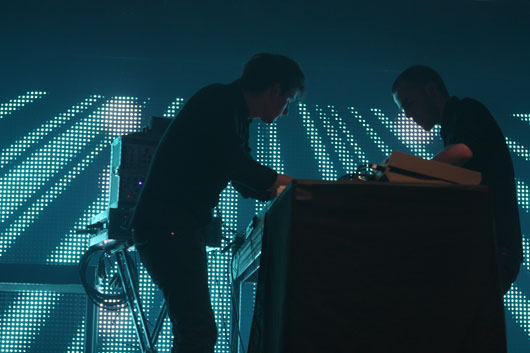 Amidst the hustle and bustle of this year’s MUTEK festival in Montreal, we snagged a few of our favorite artists for a quick chat about their impressions of the festival, the city, and, of course, some chatter about their music. Here, the city’s own Jacques Greene (pictured above left) talks about his new live show and passes along some insider information about his hometown.

XLR8R: Are you originally from Montreal?
Jacques Greene: Yes I am, born and raised.

Does it mean something special to be invited to participate in MUTEK?
It does. I’ve been attending for years and years; I’m really excited. Also, this venue (Métropolis) is one of the biggest in the city. I’ve seen some big rock shows here, like when I was a teenager, so it’s really cool to get to play here finally.

What are some of your favorite MUTEK memories?
I discovered Tim Hecker, who’s another local, at MUTEK years back. He’s a really, really good noise artist, I guess you would call him. Modeselektor actually, a few years ago, was unbelievable. The first time I saw them was at MUTEK, and now we’re playing with them, which is really cool, like I can’t describe how cool that is.

So you’re playing live for the first time at MUTEK. What prompted you to do that?
Over the last two years, I started using a lot more hardware in the music I make. I really like DJing and like that template of playing stuff, but it seemed like a really cool challenge to try and make those songs happen in the club. I’m doing the set without a laptop. Pretty much my entire studio is up there. I borrowed some gear off friends; it’s a pretty elaborate thing. It was just a really nice challenge and a nice goal to set for myself.

What kind of gear are you using?
I’ve got a modular synth, like a Eurorack. It’s a mix of Doepfer and Livewire parts. We’ve got some real old Roland stuff: we’ve got a 909 and a 303 on stage, an MPC, this clone of an 808, a fully analog clone made by a German company called Acidlab. We also got some newer digital stuff, an Akai MINIAK, which is a virtual analog synth. It’s basically a mix of new and old stuff.

And who is your friend that you’re playing with? (motioning toward the guy who has been sitting next to Jacques Greene during the entire interview.)
[laughs] This is Andrew Gordon (pictured above right). He makes music under the moniker of Ango. He’s a fellow signing of LuckyMe and I’ll let him tell the rest of the story.

Andrew Gordon: There’s not that much more to tell, really. [laughs] I play most of the digital stuff on stage.

JG: We’ve rolled in similar circles in Montreal and we’re good friends with Lunice and all that.

AG: We toured together recently, and have done a lot of parties together.

JG: We realized we wouldn’t drive each other crazy if we had to tour together again, so it was an obvious choice, really.

AG: I think you realized that. [laughing]

So are you going to be taking the live show on the road?
We’re going to do it a bit. I don’t want to do it too much because… just the stress of bringing it across the city, just loading it into a cab and setting it up [at Métropolis] has been so nerve-wracking that I don’t think I would want to make that my main method of performance. I think there’s something to be said for keeping it sort of exclusive in a way, hand-picking the places that we do it so that it’s always a special thing.

I totally went to Schwartz’s yesterday.

Do you really like poutine?
I love it. I have it… I hate to say it, but at least once a week. I had it with pogo (corndogs) in it the other day at Chez Claudette, this 24-hour breakfast joint. We know our junk food here.

For more about Jacques Greene at MUTEK, check out Part 1 of our festival wrap-up.