Five Minutes at NXNE With Grimes 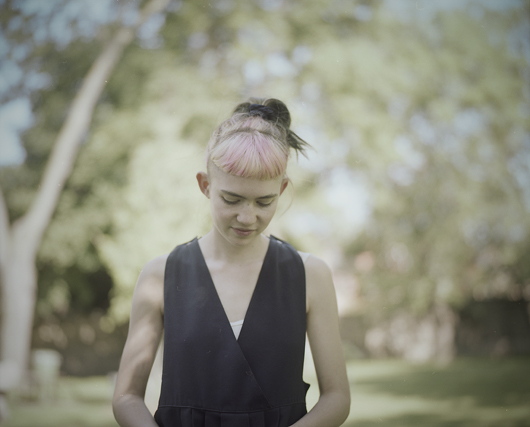 Five Minutes at NXNE With Grimes

Last week during a quick trip to Toronto for the city’s 17th annual NXNE Festival, we managed to wrangle a few of our favorite artists to get their take on the city and chat about what they’ve been busy with musically. Here we catch a few minutes in West Queen West with Montreal synth-pop singer-producer Grimes (a.k.a. Claire Boucher) as she talks about Enya, George Michael, her upcoming LP, and her favorite haunts around town.

XLR8R: Being from Montreal, do you end up playing in Toronto a lot?
Grimes: Yeah, I think I actually play here quite a bit, because it’s nearby.

When you’re here, are there other Toronto artists that you play with a lot? Is there much of a Toronto-Montreal alliance?
Yeah, probably like Doldrums… we’re pretty good friends with him and his brother, Daniel, who organizes a lot of shows that we do here, so I feel like we definitely are good friends with them. There’s not really any other bands we know really well from here, but everyone’s really nice.

What are your favorite things to do in Toronto?
Do you know Super Joy? It’s our friends’ really cool loft, and i just like to hang out there cuz there’s just really beautiful art everywhere. I tend to go to a lot of parks because I don’t really know what else to do. I don’t know the city, and I get lost every time I come here. I like the park in Kensington Market that’s like kind of sketchy.

How would you characterize Montreal’s indie scene?
Montreal’s scene is really local and geographically based. And there are sort of aesthetic links between people, but I do think, to a degree, people are doing their own thing. Which I really like, that there’s a lot of different music coming out of Montreal. And it’s very mutually supportive, and there’s a real dialog between everybody.

What’s the relationship between you and d’Eon, in terms of doing the split LP on Hippos in Tanks?
We met cuz we just had so many mutual friends. But I really liked that he was into R&B at a time when not so many other people were, so we just had a lot of musical similarities between us. I didn’t think it was gonna be a big deal, doing the split. Like, I thought we’d make a tape and make like 30 copies. [laughs]

What’s been the response? It seems like a catapulting kind of record for you guys.
Yeah, it seems like it got quite a good response. I’m happy with how it went, because I really didn’t think anything would become of it. I think I had the most fun doing it because I really like making music videos and I also really like how—Chris [d ‘Eon] is like the closest thing [I’ve got] to a band, and even though we didn’t make any music together, just being associated with another person feels kinda nice.

So there’s a full-length planned for sometime soon?
Yeah, hopefully it’ll be out on January 17 [next year]. I want to finish it really soon. I think it’ll be much better than Darkbloom. I think it’s the best thing I’ve done. It’s clean and hi-fi and really vocally oriented, and it’s like a dark take on New Edition or something. There’s definitely sort of like an R&B-hip-hoppy thing going on, but also kind of detuned bass and noisy stuff, but all in a very spacial, spacey way; not a lot of held-down chords and reverb. There’s a lot more empty space than on my other albums, but it’s also a lot more fast-paced. It’s more dance-oriented than I wanted it to be, but I think I’m just too hyperactive to make slow music.

What are, say, three ’80s R&B touchstones for you?
I have no idea, because I don’t know anything in terms of years. I just listen to what my friends give me. [laughs] I’m like really musically uneducated. I dunno, I’m really into Mariah Carey. The major influences for the album, even though they’re not necessary R&B, are like Dungeon Family and like Black Dice, Mariah Carey, and Enya maybe, but with less reverb.

Enya seems to be having a resurgence among young hip people lately.
She’s really good. She does make a lot of boring music, too, and a lot of distasteful music, but I think the idea is really cool.

Do you produce your records yourself?
Yep. [I use] an interface and a keyboard; it’s very simple. I use GarageBand. I want Mac to give me a computer one day.

Did you learn the whole process just by messing around with it?
Yeah, [Sebastian Cowan of Arbutus Records] taught me a lot of stuff. The Darkbloom thing, we sat down in his studio for a long time and went through everything and cleaned it up, and that definitely helped me.

What’s next for you?
I wanna work on the new record a lot, I want it to have a really strong visual aspect—I just want it to be really artistically cohesive, and like really powerful. And then when I’m done with that, I want to work on my live set more.

What’s the live set like now?
It’s just very short. If I played every song, I could probably play for 45 minutes, but a lot of it would be kinda crappy [laughs].

Is it just you?
Yeah, I use a vocal processor and a sampler and my keyboard. It’s very simple, but I want it to be more sonically full; I think I probably need to enlist more people, even though I don’t want to. It’s always right on the edge—I’m always like, ahhh!, jumping around, trying to do things really fast. And I think there’s definitely an excitement to that that people find interesting. Like, I was playing this huge show in Montreal at Metropolis, and I accidentally deleted a sample because I hit the wrong button, in front of like thousands of people, so sometimes it’s a bit risky, but it’s a live show—it should be. But I’d like back-up singers.

So you say that the new record is dance-music influenced. Are you at all into house and techno?
Maybe. I just don’t really know much about music, which is like really embarrassing.

No, it’s actually a really cool response, to not know every single thing by every single artist out there. It’s a fresher take on things. I like that the way your music suits a scene, somehow, but isn’t trained in all sorts of predictable ways.
Do you know Debussy very well?

Yeah, sure.
I feel like I sort of approach music like he does. He went to this World’s Fair one time and saw a gamelan orchestra, and it blew his mind, and he spent the rest of his career trying to take that impression and use that, and I feel like for me, I don’t know a lot of music really well, but I’ll hear something in a car driving by and be like, “whoa!” I remember at SXSW, we walked past this show and the music was just really cool, and I heard it for about half a minute, but it influenced me so much. I feel like I just do that a lot; I don’t necessary really even love a band. Like, there’s this George Michael song, and for the longest time it really influenced me, and I didn’t even know who made it, and I hadn’t heard it in like 10 years, but I was obsessed with it.

What song was it?
I don’t know. Song number 5 on Halfaxa is like a huge rip-off of it, but I just don’t remember it.

Check out the rest of our NXNE coverage here.