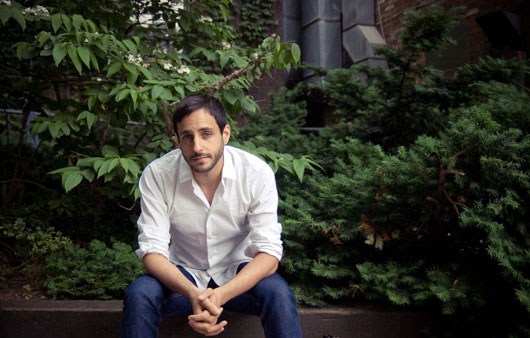 Last week during a quick trip to Toronto for the city’s 17th annual NXNE Festival, we managed to wrangle a few of our favorite artists to get their take on the city and chat about what they’ve been busy with musically. Here we sit down with Toronto techno kingpin and Thoughtless Music boss Noah Pred to talk about his label’s NXNE showcase, the Vancouver riot, and who’s hot in Toronto these days.

XLR8R: This is your first time playing NXNE. It’s a pretty rock-heavy festival, yeah? Have you attended in the past?
Noah Pred: Incidentally—not because it was NXNE, but because there was something happening or a friend was doing something; it wasn’t like I was looking at the North By schedule, but there’s always so much happening in Toronto…

Are there any Toronto bands that you’re really big into right now?
Well, my favorite Ontario band is probably Junior Boys—big fan, their new album is great! Art Department, who are no longer really officially ‘Toronto,’ and then I could rattle off a whole bunch of artists on [Thoughtless]. Tonight, you’re gonna hear these guys who are the closest thing to a band on the label. Most of the artists we work with are solo producers, but it’s two guys who go by the name Co-Op—really cool, super-kinetic live performance. One guy is working with a computer, mixer, and controllers, and Karim plays live guitar and keys, so it’s got a really engaging musical component to it. They’re really talented, and slowly working on a full-length for us, so that’s exciting.

How did you go about putting tonight’s showcase together?
Well, we’d been doing parties in Toronto for the last couple years—we’ve done about a dozen so far. They’ve done really well because of how many people we have involved in the label locally, I guess. We’ve been doing some of those events at the Drake, and they periodically get these 4 a.m. licenses for festivals, NXNE being one of them… The parties have been getting a lot of momentum and it’s cool that they picked us to do a showcase there.

How would you describe Toronto’s electronic music scene?
Well, techno and house—it’s a huge scene here. And I’m most familiar with just a segment of it; I don’t have an overarching view of like—there are a lot of pure house-music parties, like with Victor Calderone and those guys, that I don’t end up at. There’s all kinds of trance parties at the Guvernment that I never participate in either. And those are huge amounts of people. So the techno scene I can speak to a little more directly—underground techno and house. There’s sort of an old guard of people who’ve been in the scene for close to two decades, like people who originally went to parties in Detroit, Chicago, and midwest raves. But there’s a lot of new energy from kids who were sort of inducted into this scene three or four years ago with, like, MSTKRFT and Deadmau5 and that big-room electro sound, who’ve now gotten more into house and techno through blogs and following that sound into deeper realms, artists like Azari & III and Nacho Lovers and guys like that. So it’s a really exciting time because that older guard and younger crowd are starting to commingle.

So who do you consider Toronto’s old guard?
Arthur Oskan, who’s on the label, has been around for a long time, and he’s just been slaving away for years and years. And with the parties we’ve been doing, he’s really honed his live set, and just within the last two years, particularly this year around his full-length, people are really starting to recognize what he’s doing and I don’t think he could do what he’s doing without that longer-term sensibility of the origins of the music in Detroit. It’s hard to talk about the old guard without mentioning a lot of the people that have moved to Berlin over the years, like Jeremy Caulfield, Mike Shannon, Adam Marshall, Jeff Milligan, Pantone, Jake Fairley, a lot of guys who’ve done pretty well over there all have Toronto roots, or at least Ontario roots. I can’t really call myself Toronto old guard, but maybe Canadian, in a way.

Where else did you live?
I lived in Vancouver ’til I was around 23. I moved to Montreal for four years and lived there, kind of during the Montreal heyday before a lot of the Montrealers moved to Berlin. Then I moved back to BC for a year and a half, before coming back to Toronto.

What’s your favorite place or thing to do in Toronto?
I’m a big fan of Trinity-Bellwoods Park. High Park is nice, too, but I don’t get there as often.

Any Toronto delicacies that should not be missed?
Yeah, Trinity-Bellwoods at night, in the summer, picnic and drinking with friends—that’s the vision. But a delicacy… Toronto is incredible for food, so it’s hard to pin down. Foxley Bistro on Ossington, that place is great. And just south of that on Ossington, probably my favorite Vietnamese spot, The Golden Turtle. In Kensington Market, there’s a tiny hole-in-the-wall Mexican place called Agave Y Aguacate that’s just amazing. It’s cheap and you don’t get fresher than that. One more I’ll mention, because I really haven’t experienced it anywhere else, but Gandhi on Queen near Bathurst, the roti there, it’s sort of this East Indian/West Indies fusion where they do like a Caribbean-style roti but the filling is all East Indian curry, and it’s really spicy and so good.

So, your Canucks last night… feelings? Do you care?
My feelings are that Canadians clearly cannot handle hockey and that we should probably make it illegal… I kind of could have predicted that would happen if they lost, and that is what happened 20 years ago. I find it a little bit sad what people get fired up about these days; I guess it’s a sign that we have it pretty good overall. But anyhow… not to harp on that.

Stream Thoughtless Music’s 50th release, Era One: Mixed by Noah Pred, and check out the rest of our NXNE coverage here.