During the course of Barcelona’s Primavera Sound festival, John Talabot was at the helm of […] 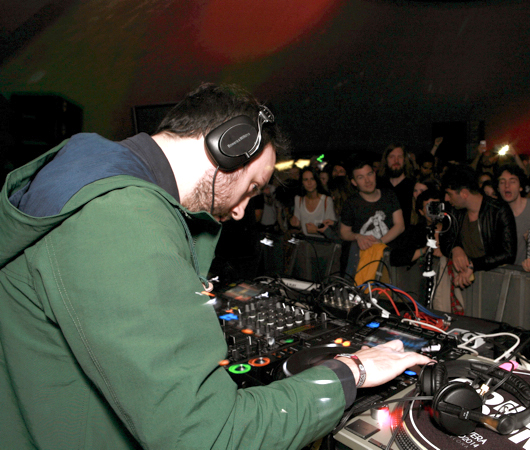 During the course of Barcelona’s Primavera Sound festival, John Talabot was at the helm of […]

During the course of Barcelona’s Primavera Sound festival, John Talabot was at the helm of a showcase for his fast-growing Hivern Discs label, which presented a nine-hour stretch of DJ and live sets from the imprint’s inner circle that ultimately stood as one of the weekend’s highlights. (Our full review can be read here). Following his early set in the Bowers & Wilkins + Boiler Room tent on the festival’s closing night, we caught up with the Barcelona DJ/producer to chat for a few minutes about his disco-heavy set, his plans for the Hivern Discs label, and what it’s like to have an event like Primavera in his hometown.

XLR8R: What’s different about playing at a festival that is actually in your hometown?
John Talabot: It’s really nice, because I basically play in a different city in Europe every weekend. A festival like Primavera is very special to me. This festival was the first one that really trusted me with my project. They actually asked me to perform a live show before I had one, and they pushed me to put one together, so the fact that I now have a live show is in many ways because of them. Primavera just always treats me so well and I am always so happy to play here. Primavera is always the weekend I take off—I try to stay in Barcelona and I make sure to tell everyone I don’t want any gigs on the weekend of Primavera.

How long have you been coming to the festival then?
I’ve come for the last eight or nine years I think.

You played quite an eclectic set tonight, with a lot of disco in the first half. Is that where your sets have been headed lately?
No, they had asked me to do a special set. They wanted to make sure tonight was something different. At first, I couldn’t decide between playing electro stuff and disco stuff, then at the end, I ended up playing a lot of the tracks that I always want to play and really enjoy playing, but I don’t get the opportunity as much anymore because I want to focus more on taking people on a mental trip. Right now, I usually don’t get to play as much disco because I feel like it doesn’t fit with the idea I have for my sets and the sort of statement I want to make. Right now, I’m trying to have my sets take people somewhere, which is hard with disco because the mix can’t always be so smooth, sometimes you only have four bars to make the whole mix happen.

Have you always been a disco head?
Yeah, I’ve always enjoyed it. I grew up mixing that stuff—the first records I collected were disco and funk tracks. Then I got really obsessed with classic Chicago house mixes like the Hot Mix Five and those kinds of crews. They were masters of mixing and they had different tricks to each of their mixing styles. I learned a lot from listening to them. For me, they are like gods.

Other than the emphasis on Barcelona, do you think there is something that strings together the label’s releases?
People ask me about that a lot, and I think the main thing is really just our tastes. We don’t have many restrictions, we just try to make the label interesting. There are some labels that are really focused on one sound, and they release amazing stuff, but there are not too many surprises. For me, part of the fun of running a label is to put out surprises. I like stuff that is really weird but still works, and I think it gives the label a personality. I feel like the label now does have a personality, but one that formed because of the personalities of the artists we’ve released. That’s something I admired about the old-school labels—they had a personality, but it was one that was made because of the artists that were on the label, not because the label was looking for something specific.

Do you have any goals for Hivern Discs moving forward? Is there anything in particular you’d like to accomplish?
We are going to release some full albums for the first time this year, and I am really looking forward to that. We’ve signed some really amazing artists and we are now just figuring out what is the best way to put out their work out. For our releases, we try to help the artists get good artwork and have a full package, so that they can be sure their music is received properly.

Is that what is fun about running a label? Helping these artists complete their creative vision?
I think so. We don’t do management, but we do some things like that, and we try to help the artists be able to go further than just the label. We try not to treat our artists as just producers; we try to get people that have a full concept of what they are doing and then help them see that through.

How do you find artists for the label? Word of mouth?
We actually receive a lot of really incredible stuff, then those lead us somewhere else, then on to another thing… And now we have Daniel [Baughman] who does our A&R and he brings a lot of new ideas to the table. Since he’s been involved for the last year, we’ve received some really great demos and he is a person you can trust—the artists trust him and so do we. At the beginning, it was just me, but I travel so much that I felt like the artists weren’t getting a fast enough response. It’s nice to now have someone who is really focused on that communication with the artists.

How do you find time to listen to music?
Listening to music can be a hard job. Listening to music for playing or selecting things for the label is something I spend a lot of time doing. I spend a lot of energy listening to other people’s music and trying to give them some advice or my genuine opinion or whatever. To write an email about someone else’s music can really take a lot of energy, and sometimes I feel like I’m losing the energy and time I’d put into my own music in order to try to help other artists, but I think it is something I actually can enjoy even more than doing music. When I put out a record and the record really works, it’s an amazing feeling, even more so than putting out my own music. I really enjoy it and I don’t want to stop doing that.