Five Minutes with Disclosure at Coachella

Over the weekend, XLR8R took a trip to the California desert for the first weekend […] 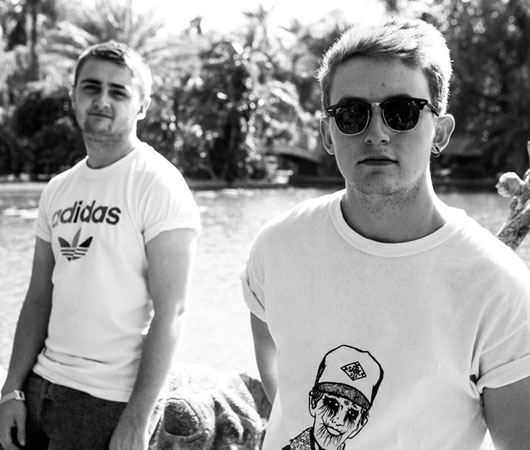 Five Minutes with Disclosure at Coachella

Over the weekend, XLR8R took a trip to the California desert for the first weekend […]

Over the weekend, XLR8R took a trip to the California desert for the first weekend of the annual Coachella Valley Music and Arts Festival, which we chronicled in a list of Winners and Losers earlier this week. While there, we had the opportunity to catch up with ever-rising UK duo Disclosure before the pair took to the Gobi stage late Sunday night. During our conversation, we discussed the outfit’s just announced forthcoming debut LP, the evolution of its live set, and what brothers Guy and Howard Lawrence make of their recent commercial success.

Howard: We got in just last night.

Have you walked around at all or had a chance to see anyone yet?
G: We walked around a bit earlier. We haven’t seen anything yet, but I’m going to try to watch James Blake, Rodriguez, Tame Impala, and Wu-Tang today.

You guys are essentially the closing act for the entire weekend. Is that a strange place to be in, considering that you’ll be wrapping up a day that’s included the Red Hot Chili Peppers, Nick Cave, Vampire Weekend, Wu-Tang, and other artists of that ilk?
G: It’s sick. [laughs] We couldn’t be happier about that.

You guys have been touring a lot in the US over the past year, but do you think this is the biggest crowd you’ll have played for in America?
H: Yeah, probably.

G: We’ve done a lot of our own headlining shows, but this obviously has the potential for way more people. We played in Miami for Ultra, but that was [during the] daytime, so I think this will be much different.

Yeah, you’re starting as the Red Hot Chili Peppers’ set will be coming to an end on the main stage.
G: Definitely will be a different crowd. [laughs] It should be fine. I’m actually a little annoyed we can’t watch them at all because we’ll have to be setting up by that point.

You guys have done a lot of touring in Europe and the US after starting out at the very beginning opening for people like SBTRKT. Has your approach changed or evolved as you’ve become headliners in front of bigger audiences?
G: Not the approach, but the set-up has changed. The set is still built from the same idea—I have my own station where I control Ableton and play a lot of the percussion, drums, and vocal samples and Howard does all the chords, basslines, and singing—so that’s still the same. The production value has gone up massively though. We have all these screens now that do visuals and use the “faces.”

H: Yeah, it’s the same approach, but it just looks better now. We tried to make the lights and visuals complement what we’re doing instead of distracting from what all we actually do on stage.

Getting back to Coachella, a lot of the acts have brought out special guests for a song or two during their performance—Phoenix had R.Kelly come out, The xx had Solange on stage for a song. Any dream guest performers you’d want to bring out during your Coachella set?
G: J Dilla.

How about someone who’s alive and, who knows, may even read this?
G: D’Angelo.

G: D’Angelo is the only person I reckon that could sing “Latch” like Sam [Smith].

D’Angelo is a pretty phenomenal keys player, too. Maybe you could have him help out on that end as well?
G: I’d pretty much let him do whatever he wants. I’d just stop playing.

H: We’d probably just leave the stage and let him do his thing. [laughs]

And between all the touring you’ve been up to, have you managed to finish your debut LP?
G: I don’t know how, but it’s done. There will probably be a week or so of final tweaks to the mixes once we get home, but essentially, it’s done.

Did you have to schedule time for both of you to work on the record considering how much travelling you were doing throughout the process?
G: There were definitely times when it was like, “You have to work now,” even if we didn’t feel like it. It’s not like the old days. [laughs]

And you are still working out of the same studio above your Dad’s shop in London?
G: Yeah, man, same exact place.

Do you record the vocal collaborators there as well?
H: Sometimes. We also have a friend, Jimmy, who helps us write sometimes, and we’ll record at his space as well. We also recorded a few vocals at the Red Bull studios in London, too.

Was approaching the album process different than just making singles and EPs for you guys?
G: We didn’t really have any guidelines when we were making the record—it’s not a concept album or anything like that—we just wanted to make a few club tracks and a few vocal tracks, and we tried to order it so it flows nicely. There’s not a story running through it really—I don’t think we’re old enough or good enough to make that yet. [laughs]

And you’re happy with how it came out?
G: Yeah, definitely. For every release we’ve had so far, before it goes to a label or management, we play it for our mates and our mom. So far, that’s worked, and they like it, so I think it’ll be okay. [laughs]

I think it’s safe to say that the speed with which your music has taken off was unexpected, or has at least exceeded the initial goals you had for making music. Now that the Disclosure project has gotten to the place it is currently, are you still setting goals for yourself? Or are you simply rolling with it and waiting to see what else happens?
G: We keep being told that we do this house/garage rejuvenation or revival—which I don’t necessarily agree with, because house has always been sick. I don’t think it ever went away. But in terms of it being in the charts, in the UK especially, it’s becoming more popular. It’s amazing to see our songs charting so highly, especially in a chart that is full of shit. I think we’d just like to keep doing that, really.

G: When a credible artist like Todd Edwards or someone comes up to you and says, “I love your songs,” and then it also charts, what else can you ask for?