Over the past weekend, XLR8R headed north to take in the 2013 edition of Vancouver’s […] 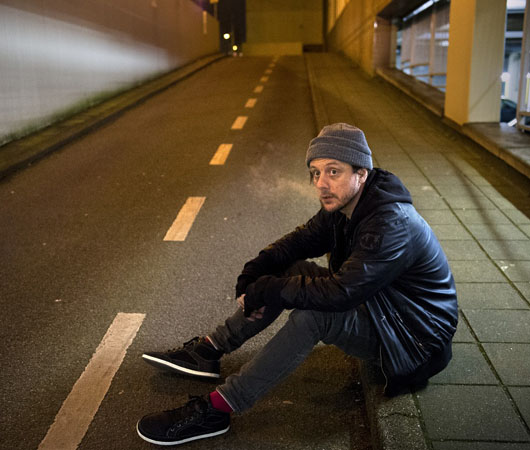 Over the past weekend, XLR8R headed north to take in the 2013 edition of Vancouver’s […]

Over the past weekend, XLR8R headed north to take in the 2013 edition of Vancouver’s New Forms Festival (our full review can be found here). While there, we also set aside some time to check in with a few of the artists featured on the four-day gathering’s impressive bill, including London soundsmith and PAN affiliate Lee Gamble, who talked with us the day after his performance. During our conversation, he reflected back on how his live set has evolved over a summer full of touring, and told us about his forthcoming projects, including his recently announced collaboration with fast-rising Los Angeles producer Delroy Edwards.

XLR8R: It looks like you’ve had a busy summer this year, with a lot of gigs around the world. Were you somewhat surprised by the demand for your DJ and live sets, especially since your tracks aren’t necessarily directly dancefloor-oriented?
I think I knew that the new material I had made would have a slightly bigger audience than my previous work, because that stuff was so specific and appealed just to a minority of people. When I made Diversions and Dutch Tvashar Plumes, I thought I’d get a few more offers because it was more musical and on PAN, but the amount of people who wanted to bring me out was pretty overwhelming. I certainly didn’t expect to play [MOMA] PS1, The Bunker, MUTEK, or to be invited to play Rio [de Janiero], which is happening later this year. When I think back, it’s really only been less than a year since I released those records, and that’s mad. I have been doing music for a while, so there’s definitely still been a build-up, but I don’t mind having my little moment right now. [laughs] I’ve been enjoying it because I’ve played plenty of places before that were just the back of a bar with 18 people, so it’s nice to feel like I have a chance, as long as the music warrants it and people are into it. It’s been pretty inspiring though. I feel like it’s pushed me to want to work on my production and work on some new ideas, and really take my music forward. I think if the music had just gone out and just a few people heard it, then I might not feel that same push.

And playing live has allowed you to actually see how people react to the music, and maybe that has started to affect what you’re working on now?
Exactly. That’s what is great about doing live shows, you get to see a pretty honest reaction in some ways. It is only one dimensional though, because a lot of the music that I make isn’t particularly aimed at a dancefloor.

Do you see your live show as a way to bridge a sort of gap between what you’ve made to be listened to and how it can be interpreted with a dancefloor in mind?
I can be really hard on myself when it comes to basically anything—[especially] my music—but I’ve started to become more confident with my role at [events] like this. I really enjoyed the New Forms set, it felt good to me. It felt like I was getting to points where I was able to get a bit out there, but there were also moments I thought people could have a bop about to, without compromising any of the aesthetics.

Especially at “electronic festivals,” one can definitely become overloaded with four-on-the-floor, so it was nice to have a break from that but not lose the momentum necessarily.
Yeah, I think the thing is with the four-on-the-floor stuff and the tempo that house is in, often you can get stuck there. I have a part of my set, about 15 to 20 minutes, that sort of goes there, but anything longer than that, it seems hard to get out of it without making a huge fucking gesture. It’s really hard to slip out of it. I find it quite narrowing in a way. That’s something I more started realizing while I was DJing. When you’re in that kind of tempo, to slip in a considerably slower or faster track, or something with a different rhythmic structure, can be hard; it really closes you in. There are definitely guys that can do it well—someone like Fred P—that can make those sorts of long, consistent sets sound amazing, but I can’t be that. I love it, but it’s not what I think I’d be good at.

I think of my sets in a visual sort of way, I actually draw it out a lot—very simply, here’s zero minutes and here’s one hour, and I map it out visually, sort of making the shape it needs to follow. Like, it needs to go down here, and hit this bpm roughly there, and then I go through all my sounds and try to figure out what can fit in that map; I start arranging, re-editing bits, leaving space to improvise and stuff like that. There’s a sort of composition to it, but it is different for every show.

Now that the festival season is winding down, are you going to have more time to work on new music again?
That’s been one of the weird things about playing so many shows is that I haven’t had as much time work on stuff. When I was just doing my day job more, I’d come home and I couldn’t wait to get [started], cuz I had spent my whole week getting frustrated and not being able to work on music. Now that I’m doing music pretty much full time, when I have time off, I’m like, “Wait, now I’m supposed to work on music having been around it so much?” I do have an EP that’s basically done now though, I just need to mix it down, and I hope it will be out before the end of this year [via PAN].

And what about the tracks you and Delroy Edwards have worked on together, are those finished?
Yeah, we’ve got three or four that are pretty loose, just sort of us fucking about.

How did you guys end up working together? Did you just start trading sessions back and forth?
I met him when all the L.I.E.S. guys were in London, and Delroy mentioned that he might be into working on something together. I really liked his stuff, so I immediately said “Yeah, man!” Plus it’s just weird, I don’t think people would generally expect us to work together. We just hung out at my house and messed around and came up with a few things that seemed alright. We still need to polish them up and put in a little detail time. He’s coming back to London in the next few weeks to play some shows, so we’ll probably do a couple more then as well. Once I’ve got my own EP out of the way, I’m really going to concentrate on that, so we can put together an EP, and then I really want to work on an album for next year. I have an idea for it, but I don’t know how it’s going to come together at this point.