Five Minutes with Mala at Movement 2013 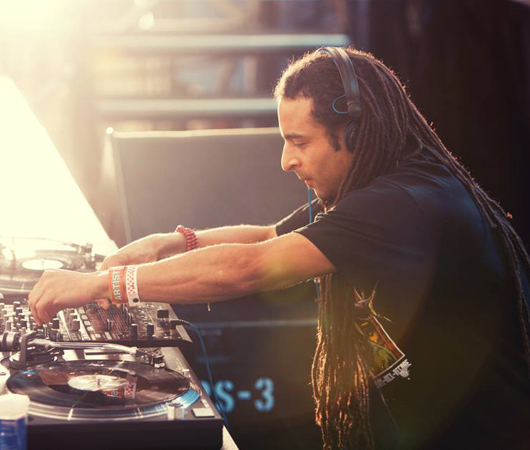 Five Minutes with Mala at Movement 2013

One of the absolute highlights from XLR8R‘s time at this year’s Movement festival in Detroit was the set that Mala played on the Red Bull Music Academy stage on Sunday (our review of it can be found here, and more photos can be found here). Between his deft selections of dark, sub-focused music and his affable stage presence, the longstanding DJ/producer rendered us speechless for the hour and a half he played—that is, until he dropped a tune we couldn’t help but cheer for. Suffice it to say that we were excited to interview Mala while we had the chance, so after he finished up talking to friends, signing 12″ sleeves, and taking photos with fans, we had a quick chat with the dubstep don about the music he’s been playing lately, whether or not he feels connected to Detroit’s legacy, and his thoughts on EDM and so-called American “dubstep.”

XLR8R: You had a pretty impressive crowd watching your set today. Do you think the influence of EDM and American “dubstep” has helped create a gateway for fans of that music to discover producers, like yourself, who have been there practically from the beginning?

Mala: Well, everything works in cycles, doesn’t it? I guess what’s going on here is you’ve got youngsters now who got into what they call “dubstep,” and they might have been into it now for like three or four years, so they’re now like 21 or 22. So they’ve been listening to the music and listening to certain people for that period of time, but after a while, they start exploring more, start digging, start connecting different dots, and figure out where things started or how things have split up. So it must have some effect, but I don’t know. It’s almost a different world to where I’m from and what I’m doing. I don’t play on the same lineups as a lot of the guys that are huge here.

Have you played in Detroit before?

What are you impressions of it so far?

I did see some crazy buildings, houses with, like, the roof caved in. I saw the train station. I haven’t really seen something like that before. Kevin [The Bug] just showed me a picture on his phone of some huge, old mansion… [turns to The Bug] Kevin, what’s that house for sale?

The Bug: It’s like a huge, antiquated court building.

Do you feel like you have any musical connections to Detroit?

I think there’s a certain attitude, a certain mentality, and perhaps a certain approach that connects a lot of different styles of music. It’s funny, I always have a bit of a problem with trying to label different styles of music. When I was a youngster, the word “techno,” to me, meant something totally different to what I understand it to be now. We used to have, like, hardcore and jungle raves, and we’d have these arenas with, like, five venues: one would be the jungle arena, one would be the hardcore arena, one would be the house and garage arena, and then there’d be a techno arena. But it wasn’t like Derrick May, Juan Atkins; it was like really, really fast, almost like gabber or something. So in my mind, this is what I thought techno was, so as a youngster I was like, “Nah, man, I’m not into that.” But as you get older, you become more open minded. You start discovering certain things about certain places and producers, where they’ve come from and what they’ve done. So, I think, indirectly, I have to have been influenced by this place. Because it’s a sound that’s conquered the world, the same as, like, Lee “Scratch” Perry and what he did with mixes and reverb. It’s not necessarily a direct experience that you had, but more like what they’ve done years ago has filtered out through the world, through electronic music.

How does Movement compare to the kinds of places you normally play?

I’ve just been very lucky over the years. Somehow, I’ve managed not to pigeonhole myself. Just for myself, I’ve always wanted to be open-minded, and not say that I’m this producer or that producer. Back in 2007 or 2008, I was invited by François K to come and play at his night Deep Space, and I’ve played there maybe five or six times now. And I remember the first time I met François, and he was like, “You know, it’s a Monday night. We play the music a bit more quietly, we don’t really do rewinds.” But within about 20 minutes he was pulling a serious bass face. I was pulling up tunes and everything, and it was going off. That’s what amazes me about people like François K, they’ve been doing this for so long, but they can still connect the dots. Somehow, he sees something in what I do that relates to what he does, and he brings that together.

Do you find your selections changing from festivals to smaller clubs?

Nah, man. I play what I play. Like today, it was really perfect to play out there. If it had been technically difficult, I would’ve had to leave by now, because I would’ve just felt destroyed by the situation. It’s a difficult audience, anyway, but the fact that I was free to just play, meant that it doesn’t matter if they know who I am or if they’re getting into it. If they at least see me vibzing and they see that I’m into it, at least they’ll appreciate that I’m feeling what I’m doing. You know, I’ve played at festivals even bigger than this, and because I still play with turntables with dubplates and vinyl, a lot of times you’ll get feedback issues, just technical issues. For me, that ruins it. You can’t play. Yeah, you do play, and people enjoy themselves, but you go home just feeling deflated.

What all were you playing out there today?

A mixture of stuff from my Deep Medi label, stuff from DMZ, and dubplates, as well. I was playing stuff by Coki, Loefah, Goth-Trad, Silkie, Quest, Swindle, Kahn… There was one from a guy from Finland called LAS and a couple from a young guy from Manchester called Compa. I’m just very lucky that these people give me their music to play, and I really enjoy their music. It’s such a privilege and a pleasure to share it with people, especially on a system that powerful.