Five Minutes with Metro Area at The Garden Festival 2013

Earlier this year, much-loved NYC outfit Metro Area announced that it would be reforming for […] 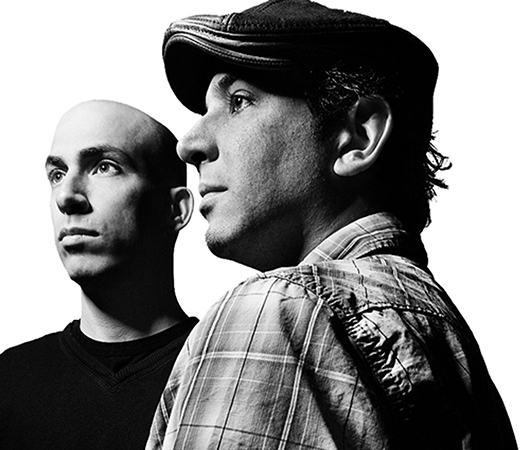 Five Minutes with Metro Area at The Garden Festival 2013

Earlier this year, much-loved NYC outfit Metro Area announced that it would be reforming for […]

Earlier this year, much-loved NYC outfit Metro Area announced that it would be reforming for a series of live shows, a few of which we’ve been lucky enough to catch in recent months. Last weekend, XLR8R had another chance to check out the duo of Morgan Geist and Darshan Jesrani at The Garden Festival in Croatia. As we detailed in our review, Metro Area’s performance was quite good, and after the show, the veteran pair sat down with us for a quick interview. During our brief—but rather candid—conversation, Geist and Jesrani divulged some their reasons for reforming Metro Area, shared some details about their current European tour, and offered some opinions about the current state of the New York scene.

You guys have been touring Europe for a little while now.

Darshan Jesrani: Yeah, we left the States on May 24th.

How has it been going so far?

DJ: It’s been cool. I mean, [there have been] different circumstances for each show—very different. Some big rooms, some tiny places.

Has anything been different than you expected?

Morgan Geist: Between Darshan’s open-mindedness and general receptiveness to most situations and my “sky is falling” cynicism, there have been no surprises. When it’s sucked, I’ve been like, “Of course it sucks,” and when it’s been good, Darshan has said, “That was pretty good.” I think the one thing is that it’s a completely different generation now, which is wild. That’s the only surprise, like, “Holy fuck, we’ve been doing this awhile.” Sometimes it just feels like people are [thinking], “Who are these guys?,” whereas when we first started touring, our stuff was pretty new, so musically clued-in people would know our stuff, but in a different way. The records were new then, whereas now…

DJ: It’s almost like now, we have to approach the live set [with the mindset] that these people don’t actually know who we are based on any press or anything like that. It’s more like, can [we] do anything for the night? [It’s like being] a DJ.

Whose idea was it to start touring live again?

DJ: It was a joint idea. I guess Morgan proposed it.

DJ: He proposed it late last year, and we thought about it and we were both into it, so when January came around, we were trying to prepare for this [summer touring] season, and it took a few months to prepare.

MG: But it’s sort of like a three-way, like when you propose a three-way in a relationship. It seems like a good idea, and your girlfriend seems open-minded, but then it happens, and it’s way more awkward than you’d expect.

DJ: It takes a bit of adjustment.

MG: And you’re saying, “You said this was cool,” but no, it’s not. That’s sort of what it’s like, because I’m pissed all the time, and Darshan’s like, “It was your fucking idea.”

Was there some particular impetus to start doing Metro Area shows again now?

MG: I have my own personal reasons. Recorded music is in the shitter now, and we have to sort of subsidize our time in the studio with playing out, so I wanted to do some live Storm Queen shows, and the music was going really slowly with that. I [also] have issues where I don’t know how I’d tour it, and my vocalist isn’t able to go to certain countries, and all this [sort of stuff]. And, it’s nice, people always asked about Metro Area fairly consistently, even though we hadn’t done music in ages. People still asked about it, which was really nice. [Plus,] I was kind of in that mode of thinking, because I was getting a lot of live-show offers for Storm Queen. I thought I’d ask Darshan what he thought of doing some shows because it was a good way to do something with Metro Area while we weren’t doing records.

DJ: It’s a good way to get out and do something immediately without getting bogged down in the studio doing a whole album project or something where we wouldn’t know how it would do.

Have you guys made any new stuff?

DJ: For the show, yeah, we did some little interstitial tracks to go between some of the better-known things.

MG: And over the years, we’ve made a lots of false starts.

DJ: We have a lot of material that we started in anticipation of doing an album, but it’s been shelved for the time being to do solo stuff.

After you’re done touring, do you think you might do the album or some new 12’s or anything?

MG: This is that three-way dynamic again.

MG: We’ll see. I don’t know what will happen. One issue is that we both have some pressing solo commitments. Darshan has been trying to get his record done for his label that he’s starting, and I’ve been trying to finish the Storm Queen album, so this [Metro Area tour] sort of pushed everything off.

DJ: We didn’t do any studio music for like four months [while we were] getting ready for this.

MG: It was perverse how long we took getting ready. I think a lot of it was just that the music was so old and recorded really quite badly. So we almost had to remaster all of the multitracks. When we were first [making these songs], the technology wasn’t wonderful. It wasn’t like the ’80s, but you can definitely hear the difference between our early stuff and the one track we do off Metro Area 7, which sounds so much more 3-D and deep.

DJ: Yeah, it sounds so much bigger.

MG: Our first stuff sounds really cheap. It was cheap. It was tricky trying to have [the live performances still] sound like the original stuff, but not have it sound insanely weak. And also, with the intervening years, music has gotten so much louder and everyone is just smashing stuff with mastering. When we have people before and after us, we always sound soft. We sat down for dinner [after our set at Garden], and I was like, “The energy of our music is always really mellow feeling, no matter who plays before or after us now.” Because even if it’s slower tempo and everything, if it’s a DJ, it’s still kind of crushed and slammed, so it sounds loud, and the bass has that really processed deep thing, and we get on with our dinky, 1999-sounding stuff.

What is your live set-up in terms of gear?

MG: That’s the goal. We used to bring analog stuff. We still have an analog mixer—and we ask for a nice mixer—and we also ask for nice stuff that people don’t get us, but we can live without. But it would sound much nicer if we got very expensive compressors for the output, like an API, which two people have got for us. That’s sort of like the blue-M&M’s-on-the-rider thing, because that’s always the gear that [promoters] are like, “I can’t fucking get this.” It’s like a $3500 compressor and we’ll be doing a party on a boat or something. But really, we just made [our live set-up] cheap, because we feel like there’s not a huge payoff sometimes. We get analog stuff, and you work so hard on everything, and then someone has a shitty PA or the sound is off, so we decided to just do the lowest common denominator this time and try to keep it mostly digital. [We do have] analog summing, but the sound source is nothing too rare or delicate. We’re trying to make cheap, easily found stuff sound good by using slightly expensive outboard.

Are you guys both running Ableton?

DJ: One computer is running Ableton.

MG: We’re using Ableton and some other things.

There has been a lot of talk in the press during the past year about how New York is the ‘cool’ place again and how the New York scene is exciting.

Well, that’s what the hype says. Do you guys feel like you fit into any kind of New York scene anymore?

MG: I don’t think we ever thought… we never fit into any scene.

DJ: The hot parties now are parties that we wouldn’t be invited to play at. The big warehouse parties are more techno-ish.

MG: Actually, we’ve played some younger folks’ parties. [laughs] I don’t know how [else] to explain it. I’ve played a couple of big things, and they were always pretty nice. It’s funny, it sort of seems like sometimes like people [at those parties] are like, “It’s a party,” and they don’t… it’s that weird thing where you’re [thinking], “This crowd is kind of weird, they don’t seem like music people,” but then [there ‘s also no hostility]. It seems like [these crowds just] want to have a good time. Again, I always go in cynically and then, if the party goes well, it’s like, “Oh, that was unfair judgement. Everyone is sort of learning about this stuff.” I think it’s just the climate in New York. You know, Williamsburg. You do a party on Kent Avenue and you just see the douchery going from the condos across Kent into the warehouse.

DJ: New York is tricky. I think people are eager to anticipate some sort of scene there, because there’s a lot of talent and a lot of records are being made. But from our point of view, it’s still a little weird. There are a lot of people doing parties, but I wouldn’t consider it some big scene.

MG: I think the inspiration we’ve gotten from New York has always been independent of the music scene. [There’s] the music that we love from there, and the old club scene and the history of it, but currently I feel like it’s just the city itself. It’s always been like that. You know, our friends—who are a lot of non-music people—and just the feeling on the street, the architecture, and all the stuff we grew up with.

DJ: Just the essence of the city.

MG: The very last of the essence is dripping into the Hudson right now. [New York] is pretty much a mix of Portland and LA now. And some very wealthy place, like Frankfurt. Some rich, boring place in Europe.