Five Minutes with Oneman at Igloofest

During our icy weekend at Montreal’s Igloofest (read all about that here), XLR8R took a […] 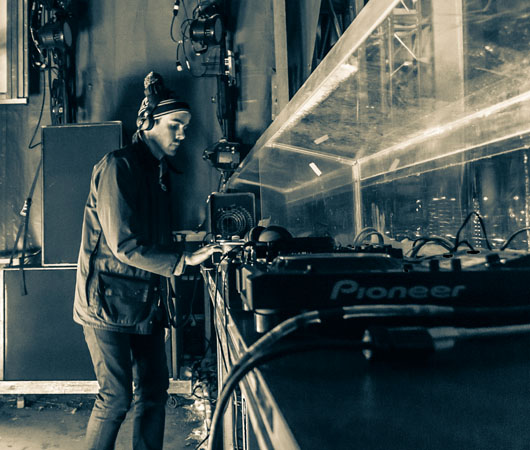 Five Minutes with Oneman at Igloofest

During our icy weekend at Montreal’s Igloofest (read all about that here), XLR8R took a […]

During our icy weekend at Montreal’s Igloofest (read all about that here), XLR8R took a few minutes to catch up with UK mixmaster Oneman following his set during the festival’s wintery Friday-night party. After the feeling came back to his hands, the London jock briefly discussed his experience in Canada, the ebbs and flows of his set that night, and his plans to tour North America later this year.

XLR8R: Did you have a good time playing tonight?
Yeah, really good actually.

Was it cold on stage for you?
It wasn’t actually, because they had about seven industrial heaters on stage. I was actually burning at one point. The transition between coming off the stage into this warm little backstage cabin, [that] was pretty cold. Your hands feel it more than anything else. It was all good fun up there though.

There was a pretty big crowd out for your set, all wearing puffy jackets and beanies and such. Was it difficult to get a sense for what the reaction was to the music?
I was a little detached from the crowd because the stage was raised and there was also a barrier, but if you looked out hard enough, you could tell what was going on, even with all the bubble hats and ski wear. Everyone seemed like they were having fun and I think I even saw a few crowd surfs. And most everyone was singing along to the ’80s classics.

At what point in your set did you think to yourself, ‘These people want to hear some ’80s tracks’?
Well, I was sort of bringing it down for Joy [Orbison]. I tend to go a little hard towards the ends of my sets, and obviously Joy doesn’t play too hard, so I took that into account. It sort of helps him out by bringing the vibe down a little, playing some classics so I can drop the bass out, and then he can build it back up.

Are you guys on the same bill often?
Not a lot actually; maybe four or five times a year. He’s always good to play with. If I play first, I usually tend to end on a softer note.

Is this your first time in Montreal?
Yeah, it’s my first time. I got to walk around in the snow today, hit a few stores, and eat some really good food. I’d been to Canada once with my parents when I was younger, but I hadn’t been out here to play until now.

Are you hitting some other cities while you’re here?
No, but I’ll actually be back in March for two shows—one in Montreal and one in Toronto—with Rustie and Jackmaster.

We’re still in the early stages of 2013, do you have any goals or plans for this year that you’re excited about?
Well, I just put out Solitaire Vol. 1, which was my first unaffiliated [and free] mixtape, and it seems to be going really well, so I’ve booked a tour around that, which I’m looking forward to. I’ll be headed to North America for those shows I just mentioned, as well as SXSW and WMC in Miami. Hopefully, I’ll get back to the States in June for some West Coast dates and maybe head back up here.

Have you been to SXSW before?
Yeah, I went last year and it was really good. Jackmaster and I played the FADER Fort and the SBTRKT party last time. Looking forward to going back.

Austin is sort of a madhouse during SXSW, right?
Yeah, that is correct. [laughs] It’s great.