As many of our readers have likely noticed, XLR8R spent last weekend in Quebec checking […] 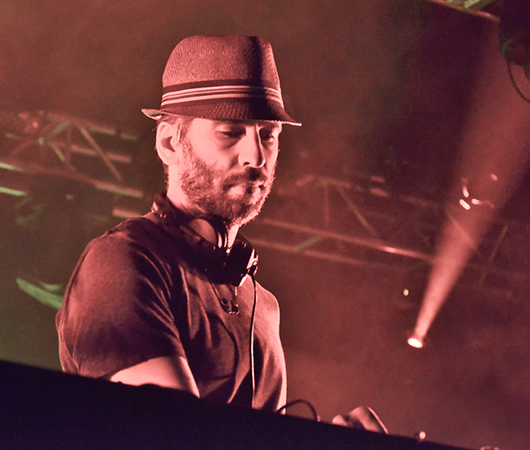 As many of our readers have likely noticed, XLR8R spent last weekend in Quebec checking […]

As many of our readers have likely noticed, XLR8R spent last weekend in Quebec checking out MEG Montreal—our complete festival review is here—and in between the myriad of shows, we convinced a few of our favorite artists to sit down for a quick chat. One of them was Ghislain Poirier, who was actually enlisted to perform twice on Friday night. We caught up with him the day before, and once we got to talking, he detailed a bit of his history with MEG, told us a lot about his Boundary project, revealed a few details about the new remix compilation he’s putting together, and reaffirmed his love for dancehall.

XLR8R: You’re actually from Montreal, so can you tell us what your experience with MEG has been over the years?
Ghislain Poirier: I played MEG the first time in 2003. I remember the show because it was at the SAT, and it was with TTC and Antipop Consortium. But Antipop didn’t come all together, and some [members] were stuck either at the border or in New York. I played two other times—one gig with DJ Marlboro from Brazil, and the other one was at Metropolis, but I don’t remember who else was on the bill. This year is the fourth time, and the festival is still here after all of these years.

You spent a lot of time this year getting the Boundary project ready, and you’ve played a few shows. Is that a project that you’re still going to be pushing forward?
Definitely. I’ve been very inspired by the whole process. So far, we’ve done three live gigs, there’s another one coming, and hopefully there will be a few this fall. It’s not even so much the gigs for me; the Boundary thing will continue. I probably have 30 sketches for new songs that I need to develop… I’m on a roll, and I have this weird goal that I want to do three Boundary albums in three years. It might be three albums in four years, but there’s a lot of creativity, a lot of bubbling going down there. It’s definitely something that I’m focusing on. I didn’t have that much time to compose music this summer, but I want to have another album for MUTEK in 2014 and synchronize everything with that. The ideas are there, it’s just a question of putting the time into it.

Is Boundary the only production and writing that you are doing? Or are you stil doing stuff as Poirier?
Yes, there’s new stuff as Poirier. This year I’ve done more remixes… I kind of slowed down a bit on that [side of my music], but now I might do more stuff with [MC/vocalist] Face-T very soon. I have a roll of new dancehall beats and I miss doing proper, slow dancehall jams. I’m also actively involved with Boogat, because I co-produced his album that he released this year.

It’s funny because this year it’s like I’m kind of busy, but I’ve been involved very strongly in three projects. There was the Boundary album, obviously, but I also co-produced the Boogat album while doing a few songs for it. Now, we’re working on another album for him and I’m very closely [involved] in the process; even when there is another producer, I’m part of the team.

And then I’m working on another project; I’m the creative director, it was my idea, and I pitched the whole project. There’s this guy in Quebec, Robert Charlebois, you’ve probably never heard of him. But he was huge. He actually kind of revolutionized music in the ’60s and ’70s, making rock, funk—but very hardcore. Stuff that Madlib knows. Stuff that the crate diggers know… I’m making a whole remix album [that pulls from] all of his catalog. The guy probably has like 30 albums, but the juicy stuff, the more adventurous stuff, was from the late ’60s and ’70s. So I’m doing the whole project. I got a remix from Fulgeance, one from Oh No, one from Kid Koala. I’m doing a few [tracks] also and I’m waiting for other remixers as well. I need to finish the project by September.

The marketing and presentation of Boundary was very subtle, and the music wasn’t presented as “Poirier’s New Project.” Was that a conscious choice?
Yeah, it was. So far, I’ve been happy with the result. I didn’t want people to be confused or disappointed by what it is, and I wanted to be very clear that [Boundary] is something else. I always felt that the Boundary name should come before Ghislain Poirier, and not the reverse. [I didn’t want it to be] Ghislain Poirier’s new project Boundary, but Boundary, the new project from Ghislain Poirier… because of the message we delivered, I didn’t have a backlash of people saying “Why is it not like Poirier?”

I don’t have the same kind of goals with [Boundary]. I’m making that music because I really want to make it. It’s been self-released. That’s further than an indie release. That’s self-released. There was no fucking Kickstarter shit for that. I didn’t beg anybody. No government. Nobody. I just do the project because I want to do it. I feel strongly about that, and I don’t mind if it’s more secret or obscure in a way… I’m just trying to do quality music that I’m really happy with. And if I’m happy with it, I can share it, sell it, and play it better.

However, most of your DJs gigs are still as Poirier, playing dancehall, soca…
Yeah. Poirier is for DJing and Boundary is all live. So that’s the definition. In the last year, I’ve been playing a lot of dancehall as a DJ.

On a global scale, dancehall, soca, and other “tropical” or “global” rhythms haven’t decreased in popularity, but in terms of people in the US and Europe being interested, it seems like the interest level has gone down. Are you still finding yourself as equally passionate about these sounds as you were before?
Oh yeah, definitely. It’s different, as you mentioned. But for me, I loved dancehall before, I loved dancehall through [the hype], and I still love dancehall. I feel like the base of all tropical bass is dancehall. It’s very funny, because I will post something that is very dancehall, something very related to Jamaica, and all the people that like “tropical” stuff will like it. Cuz we’re all coming from [dancehall] in a certain way. That was true club music from another country that invaded the world, and still does. There’s so much going on there, it’s unbelievable. In Jamaica, there are less people than there are in Montreal. They have a good-sized diaspora of people—there are a lot of Jamaicans elsewhere—but for such a small amount of population, there is such influence.