Floating Points: A young UK composer connects the dots between dub and science.

Twenty-three-year-old Londoner Sam Shepherd is all over the map. Literally. When I contacted the busy […] 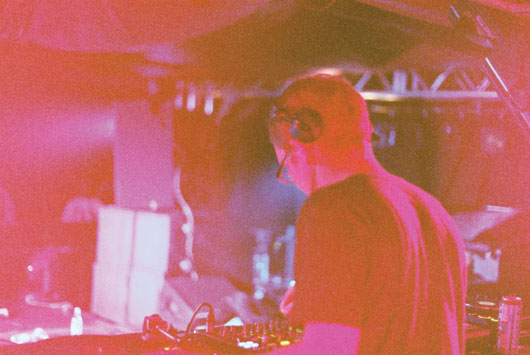 Floating Points: A young UK composer connects the dots between dub and science.

Twenty-three-year-old Londoner Sam Shepherd is all over the map. Literally. When I contacted the busy […]

Twenty-three-year-old Londoner Sam Shepherd is all over the map. Literally. When I contacted the busy producer, DJ, and bandleader who records as Floating Points, he was gigging in Greece and his MySpace page listed bookings across Europe several months deep. It’s been a quick ascent for Shepherd, who, until recently, had only three official EP releases and a few songs on compilations. But it’s easy to hear why tastemakers—from BBC’s Gilles Peterson and Mary Anne Hobbs to Ubiquity A&R man Andrew Jervis—have been touting his work for the past year.

Shepherd’s evocative music drifts in a spacey, synth-drenched world, bouncing between boogie-house, glitch-hop, and jazzy dubstep beats. His proficiency in multiple genres can be chalked up to early years spent studying classical composition and jazz piano at Chetham’s School of Music in Manchester. At 18 he moved to London, where he’s currently working on a Ph.D. in pharmacology.

Not unlike his academic pursuits, the music Shepherd makes is also quite a heady concoction. Songs like “K & G Beat” blend Vangelis-like ambient synths with 2-step beats, while “Love Me Like This” is a soul-saturated, ’80s-inspired electro-house track. “Vacuum Boogie,” released on Shepherd’s and Rinse FM DJ Alexander Nut’s Eglo imprint, features filtered synths and an undulating underwater groove. Shepherd’s varied output has garnered attention in the dubstep, hip-hop beatmaker, and house communities, even as he’s expanded to the live setting. Like fellow classical- and jazz-grounded Brit amalgams Cinematic Orchestra or Two Banks of Four, Shepherd has put together a stage ensemble.

In May 2009, Shepherd conducted the 13-piece Floating Points Ensemble at Camden’s Roundhouse. The group included collaborator and singer Fatima along with brass, strings, guitar, bass, drums, and vibraphone, with Shepherd on synths and Rhodes piano. The show was a big success, but tight schedules have hindered doing more dates. “With the musicians being professionals and myself consumed with studies, it’s quite hard to get 13 people in a room at the same time,” he quips. “I’ve had some new ideas for tunes for the ensemble with some more interesting scales and altered harmonies. But I’m trying to not take on too much, both to give me a chance to write original stuff and to get some science done.”

The cliché is that electronic producers are often called mad scientists, but in the case of Floating Points, maybe there’s something to it. “[The Ph.D. work] is really interesting stuff and gets me out of bed in the morning. Science does help with music making, especially with sound design,” he explains. “It helps to be rational when creating sounds that have been imagined. But then it’s also quite fun to turn buttons randomly!”