Free Coffee, Ricardo Villalobos, and the Beauty of Bologna: 10 Reasons We Loved roBOt 07 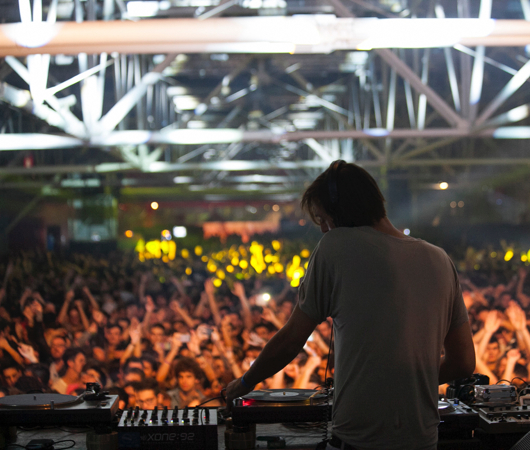 Free Coffee, Ricardo Villalobos, and the Beauty of Bologna: 10 Reasons We Loved roBOt 07

We fell pretty hard for roBOt last year. In 2013, the Bologna festival’s sixth edition saw artists ranging from Ben Klock and Seth Troxler to Tropic of Cancer and Holy Other performing in three different venues around the northern Italian city. Something about the combination of the dream setting (more on that later) and the smartly programmed, tastefully varied bill really grabbed us, placing roBOt up there with our favorite festival experiences of the year. In the interest of confirming that 2013 wasn’t a fluke, XLR8R spent these past few days back in the Emilia-Romagna capital to take in 2014’s edition of roBOT and assess the festival’s overall progress.

Featuring a line-up that included names such as Jon Hopkins, Ricardo Villalobos, Dorian Concept, FaltyDL and Moodymann, the structure of the festival remained almost the same as last year, with an early bill of music, art, and more running in one location from 6 p.m. until around midnight, with more party-focused fare taking place in a different locale from 11 p.m. to 6 a.m. each day. What we found as the seventh edition of roBOt unfolded was almost uniformly pleasing, and with the long weekend now behind us, we’ve gone ahead and compiled 10 reasons why we loved this year’s edition of the Italian festival.

Outside the Palazzo Re Enzo (photo by Simone Cappelletti)

Enjoying high-quality electronic music in a stunning, thousand-year-old palazzo will never get old.

An obvious statement, perhaps, but the Palazzo Re Enzo, the venue used by roBOt for the earlier programs each evening, really was breathtaking. Dating from the 1200s and situated on the city’s central square beside a spectacular statue of the Roman god Neptune, the palazzo is something of a rabbit warren, with multiple staircases and corridors leading to various rooms that roBOt utilized for music, sound-art installations, bar space, and film screenings.

The main focus of this glorious building was the Salone de Podesto, the palazzo’s spectacular main hall, where the primary musical attractions of roBOt’s earlier programs were scheduled. With its ornate wall carvings and chandeliers, the Salone was beautiful in an effortless kind of way; it didn’t demand attention, but at least once a night, it made us stop for a moment to think, “Just look at this place.” As well as being an aesthetic dream, the sound quality in the Salone de Podesto was also fantastic, with an excellent system allowing music as disparate as Roly Porter‘s apocalyptic bass assault, Dorian Concept‘s glistening new live show, and WIFE‘s transcendent pop to flourish fully in their own ways.

Inside the Palazzo Re Enzo

Another view from inside the Palazzo Re Enzo

The new night venue was a quantum leap forward.

As excellent as last year’s edition of roBOt was, the two unremarkable, out-of-town clubs used for the latter half of each night’s festivities didn’t quite live up to the lofty standards set by Palazzo Re Enzo. Fast-forward a year, and the change was astonishing. In 2014, roBOt moved the late segment of the festival to the Bologna Fiere, a gigantic, gleaming exhibition center that resembles a blisteringly sleek and modern international airport. Within the enormous space set aside for roBOt were two primary stages—the Main Stage and the RBMA Stage—which stood back to back with a single backstage area between them. Bar space was many, many times what it had been the year before, and the overcrowding that characterized a fair bit of the festival’s 2013 edition was virtually absent this time around. Not everything was perfect (toilets were oddly at a bit of a premium the first night, with more portaloos hastily added for the second night), but, generally speaking, the Bologna Fiere was a major improvement.

The crowd inside Bologna Fiere.

Bologna itself is wonderful.

Bologna is basically what people with the imagination to think beyond Venice’s canals, Rome’s ruins, or the Leaning Tower of Pisa dream of when they think of spending time in an Italian city. With a festival like roBOT—where things don’t really kick off until early-to-mid evening—it’s pretty important that the city the event is based in has plenty of non-festival activities to pursue. Bologna had everything a person could want with which to fill those hours of downtime: stunning architecture, excellent art galleries (we caught an exhibition of David Lynch’s photographs one afternoon), cinemas, shops, bars, and endless trattorias serving fabulous pasta, pizza, antipasti, and wine at knockdown prices. It’s also compact enough to explore solely on foot.

Ricardo Villalobos taught us how to smile again.

For a combination of reasons we won’t trouble you with here, we began Ricardo Villalobos‘ three-and-a-half-hour set on the main stage at the Fiere on Friday exhausted, a bit cranky, and pining for sleep. However, by the time he wrapped it up, we were grinning and dancing like lunatics. Villalobos’s set was an undulating, slow-build treat that worked its way methodically through various intensities of techno and took in a couple of cuts of sunshiney pop near the end for good measure. The Chilean’s loose, joyous onstage antics also played a huge role in pulling us back from the edge, as his beaming smile and frequent unselfconscious twirls in front of the decks were a genuine tonic to behold. Villalobos played on for at least half an hour after the house lights went up and finished with Mathew Jonson’s minimal masterwork “Typerope”—a nice touch given that Jonson had immediately preceded him on the same stage. It’s difficult to imagine that any DJ would have been able to zap the life back into us quite so effectively.

Although we never figured out if it was also available during the all-night festivities at the Fiere, having free shots of excellent Italian espresso on tap each evening at the Palazzo Re Enzo was great. The stand was of course just a large, interactive advert for whatever coffee company was doling out the goodies, but it was still a godsend for sleep-deprived journalists who needed to keep a clear-ish head. Judging from the queues, it was appreciated by a lot of other festival attendees too.

The new live show from Austrian composer Oliver Johnson (a.k.a. Dorian Concept) has been much talked-about recently, and at roBOT, it more than lived up to the clearly fervent anticipation of both the crowd and the festival organizers. One of the most wonderfully intricate and musical things we took in all festival, the show saw Johnson joined by two longtime friends for a performance that weaved layers of drums, bass, and keys (as well as number of sounds culled from some interesting-looking MIDI devices spread through the set-up) to enchanting effect.

One of the festival’s more experimental performances

roBOt is a place where high-concept art and full-measure partying co-exist in genuine harmony.

In the course of roBOt’s four days, we took in abstract sound installations that deployed analog tape, desk fans, and tiny metal sculptures. We watched Japanese duo Usaginingen create a spellbinding audio-visual performance that used projections and strange (as well as quite large) wooden instruments, and sat in on hushed screenings of highbrow films about music and art. We also danced ourselves halfway to an early grave and paid two euros each to careen around on bumper cars while ludicrously banging party techno filled our eardrums. Somehow, none of these things felt remotely incongruous next to any of the others at roBOt, which we think is quite an achievement. When one considers how one-dimensional a lot of other festivals with similar top-of-the-bill names can be, it seems only fair to acknowledge roBOt’s commitment to exploring a wide range of art forms. Beyond that, it’s also notable and commendable that roBOt’s more artistic efforts never felt like part of a tokenistic sideshow, but rather, a fully integrated and equal dimension in the wider whole.

The crowd in the Salone de Podesto

Former Vex’d man Roly Porter was one of the first acts we saw at the festival, but his performance remained in our minds through the entire week. He played in the Salone de Podesto, and the brutal grandeur of his thundering productions suited the surroundings perfectly. (One of his cuts actually induced a sneezing fit in this particular journalist, due to the bass making the cartilage of his nose vibrate. Yup, that sort of bass.) In the same space, Ghostly affiliate Fort Romeau brought intoxicatingly shiny and linear nu-disco to the table—the kind of music you’d probably want to have playing pretty much constantly on your yacht, if you had one. Both shows were major highlights in their own, very different ways.

Jon Hopkins killed it, as usual.

It’s pretty much impossible to watch Jon Hopkins and not feel pretty inspired and impressed by his intensity, not to mention his stellar songcraft. At roBOt the Surrey-born artist presented amazingly full-blooded, full-body convulsions, coaxing beautiful noise after beautiful noise out of his Kaoss Pads while running through the bulk of his Immunity album. The set also included altered versions of his Wild Beasts and Purity Ring remixes, and closed with a couple of searing new cuts that suggested a very fitting and impressive follow-up to Immunity is in the works.

The Main Stage at Bologna Fiere (photo by Simone Cappelletti)

Saturday on the RBMA Stage was excellent.

Though there wasn’t much difference in the “size” of the names booked for the Main and RBMA stages over the two nights at the Fiere, the Main Stage was consistently far more packed out, and thus more stressful to stand at. As a result, the Saturday bill at the RBMA Stage, which already featured loads of quality talent, was even more of a pleasure. Moodymann‘s early set was typically remarkable—no other DJ at roBOt finished on anything resembling the Isaac Hayes classic “Ike’s Rap II,” let alone treated the crowd to a pre-song explanation of what the track was and why it was so important to them. Later on, Lone and Konx-om-Pax‘s music-and-visuals collaboration was immersive and impressive, after which FaltyDL turned up the heat with a set of tough, at times almost industrial, techno. A flights-related snafu meant that Jackmaster missed his closing RBMA slot, but Modeselektor‘s Gernot Bronsert, having already played with Moderat earlier on in the day, capably filled in while his Moderat bandmate Apparat closed the Main Stage at the same time. Moving between the two (Bronsert playing glitchy, Modeselektor-style grooves, Apparat going more for a dark techno sound) proved to be an effective way to ward off exhaustion as roBOt 07 finally drew to a close.