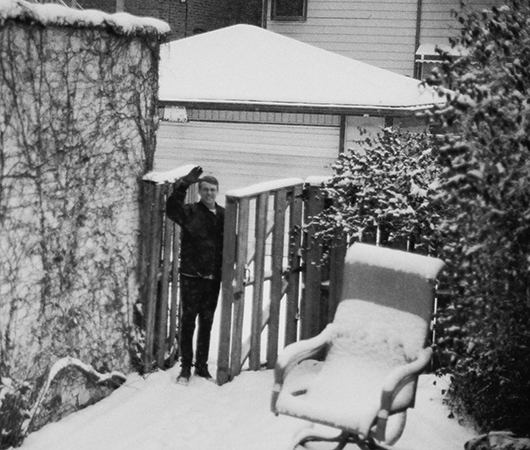 For the past several years, some of the most talked-about figures in the world of techno have been the freaks—the outsiders, the punks, the weirdos, the people on the fringes who approach electronic music from non-traditional perspectives, bringing to bear influences from punk, industrial, noise, experimental, and hardcore to create dance music that sounds anything but ordinary. Beau Wanzer, self-described weirdo, is one of these figures; his music incorporates the atmosphere and motifs of early industrial, the rhythms of vintage minimal synth, and the raw, gritty feel of turn-of-the-century European electro.

Wanzer’s story begins when he was a teenager, buying CDs and records sound-unheard from now-defunct chain stores all over the Midwest—growing up, he never spent more than a year in one place. “This was ’94, ’95,” he says. “I was 14 or 15. I would always pick out what I thought were the weirdest, most interesting covers. That’s how I found Front 242, Databank A, Death in June, all these weird goth and industrial CDs that were there.” A key influence on Wanzer’s sound was Dirk Ivens, a Belgian industrial musician who in 1980 started Absolute Body Control, an influential minimal wave band, and was later part of harder-edged EBM act The Klinik and also recorded solo as Dive. “I was always listening to Absolute Body Control,” he says. “I was super into all the Antler Subway stuff [a Belgian label that released The Klinik and other EBM and new beat]. Later, I got really into Cold Meat Industry stuff, and when I was 17, I heard the first P•A•L CD, Signum. That blew my mind and opened me up to all the Ant-Zen sound [an experimental and industrial music label based out of Germany].”

Despite his passion for industrial sounds, techno was not an unknown quantity for Wanzer. “All my friends were going to raves at that time,” he explains. “They were listening to techno, and I heard it all, but it wasn’t my thing. It wasn’t hard enough for me. You know, when you’re that age, you want the most extreme stuff you can get. So when they were going to raves, I was going to punk shows, noise shows, all that.” At age 18, Wanzer acquired his first synthesizer, a Roland Juno-6, and began steadily recording material. However, the building blocks of Wanzer’s musical career didn’t begin to fall into place until later, when he moved to Chicago at the turn of the millennium.

Wanzer began working at a Chicago record store, Weekend Records & Soap, in 2001 (which also sold—you guessed it—soap). Weekend was owned by James Marlon Magas, a long-active member of the Midwest punk and no wave scene who also released a handful of electro records, as Magas, on ADULT.’s Ersatz Audio label. It was at Weekend where Wanzer discovered the raw electro and outsider techno sounds of labels like Bunker and Crème Organization from the Netherlands, Invasion Planète from France, and the reissue of Liaisons Dangereuses’ self-titled record from 1981. “At that time, we were the only record store in Chicago bringing in Bunker, Crème, all the weird shit,” he says. “When I first heard Liaisons Dangereuses, it floored me. It just changed my world, I think. It was so alien. I had never heard anything like it before.”

During this time, Wanzer was recording material at a breakneck pace. “I was never thinking, ‘I want to put this out,'” he says. “I’d just go home and record. I’d record about a track per day, since about 2000,” a regimen he’s kept up to this day. He continues, “I’d pick two or three drum machines, a synth, and sit down and work with those two or four pieces. I don’t go in with any kind of intention, no melody in my head or anything like that. I’ll find a beat I like, and then build on that. I rarely, if ever, multitrack things. Everything’s just stereo out, and there it is. For the most part, it’s one take, one shot.”

While working at Weekend, Wanzer met fellow Chicago resident Melvin Oliphant III (a.k.a. Traxx) and the two became friends, bonding over music and records when Oliphant would visit the shop. At the time, Oliphant had just started his own record label, Nation, and the pair began recording music together. “Melvin had his label, had a couple releases out, and we weren’t hanging out with the intention of putting out music or even making music, we were just listening to records,” Wanzer recalls. Still, It wasn’t long until they started recording together, creating off-kilter hardware house music that would eventually be released under the name Mutant Beat Dance. (Over the years, Wanzer has also become involved in a number of other collaborative projects as well, including Streetwalker with Elon Katz of White Car, Civil Duty with Shawn O’Sullivan of Led Er Est, and Juzer with Dan Jugle.)

However, when Wanzer works as a solo artist, his productions take a different tack, amping up the darkness and often slowing down the rhythms. His first solo release came in 2008, on a three-track Nation compilation, a year before Mutant Beat Dance’s first record. Bearing the cheeky title “F. U. Klaxon,” it’s a grim but gorgeous piece, with a throbbing drumbeat keeping time under a gurgling synth, fuzzed-out vocals, and an insistent minor-key melody. A handful of compilation releases followed, but it wasn’t until 2013 that his first solo 12″ was released on New York’s L.I.E.S. The record featured a track that put him on the radar of many DJs, the even-more-cheekily titled “Balls of Steel.” Embodying Wanzer’s minimalist approach (it was recorded with a single drum machine and a microphone—nothing more), the track features a plodding electro rhythm with Wanzer’s disembodied vocals interspersed, proclaiming: “I should stop smoking/It’s killing my body/Everyone should try it/I’ve got balls of steel.“

Wanzer’s just-released eponymous first LP is ragged, rough, and woozy, playing with genres throughout, the whole thing cobbled together from dozens of archival cuts dating back to 2002. In spite of its rough edges, the one theme that binds the album together—and, in fact, links all of Wanzer’s productions—is humor. The album’s artwork harks back to the bygone era of ’70s and ’80s horror films, a genre of film that always teetered on the edge of absurdity as directors often toyed with their audiences—audiences who knew they were being messed with, but loved it all the same. Even the track titles (e.g. “Mob Boss,” “Slow Down Sir,” “Shitty Cough 2,” “Storm Food”) are winks and nods to a knowing crowd, lightening the mood of what would otherwise be particularly dour collection of music. “I obviously like dark music, but dark music with a sense of humor is key,” says Wanzer. “I’ve never taken myself too seriously, and that’s something I hope to convey with my music. It’s good to have a sense of humor with whatever you do—balancing the macabre with a sense of playfulness.”