The veteran Ann Arbor producer has quietly amassed an impressive arsenal of acid and jakbeat. 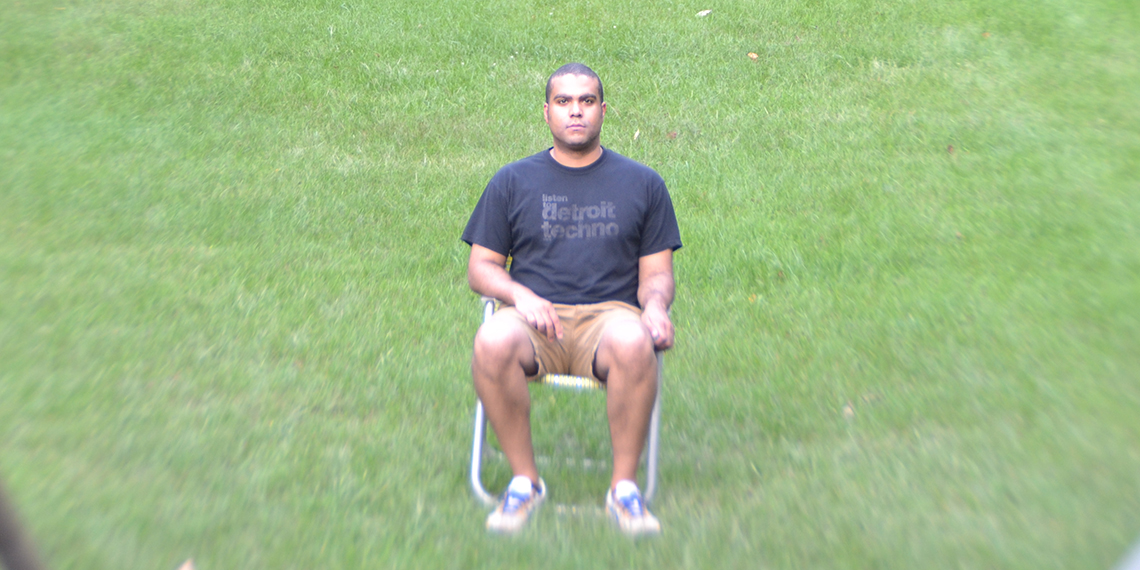 The veteran Ann Arbor producer has quietly amassed an impressive arsenal of acid and jakbeat.

Nestled 45 minutes west of Detroit en route to Chicago, Ann Arbor is largely known as a college town, but it’s also an important (and occasionally overlooked) puzzle piece in Midwestern electronic music culture. The city spawned Ghostly International and the essential Necto Nightclub, along with key producers such as D’Marc Cantu, who continues to quietly assemble a vast discography under the radar. “I think Ann Arbor gives a refined approach to electronic music,” says Cantu, whose full name is Nicolas D’Marc Cantu. “The Ann Arbor sound shifts and twists those classic Chicago and Detroit sounds; it gives an interesting edge.”

Cantu’s own work typically blends two distinct sounds: acid and jakbeat. “For me, jakbeat is more emotionally based,” he describes. “It’s not necessarily grounded in a particular style or genre. It doesn’t really have a formula, but there’s raw emotion behind it.”

That kind of emotion has always appealed to Cantu, even before he got involved in electronic music. Growing up, he collected cassette tapes and mixtapes, listening to everything from funk and soul to jazz and pop (his first cassette tape was Michael Jackson’s Bad). He eventually started making his own mixtapes, moved into record collecting by junior high, and later became a drummer. Yet as a fan of grunge, rock, and metal, Cantu had no real affinity for electronic music. “Back then, I thought electronic music was really one-dimensional,” he says, “but of course, I didn’t have much knowledge about it.”

It was around 1998-1999 when Cantu first met Tadd Mullinix (a.k.a. Dabrye a.k.a. JTC) and received a crash course in electronic music, changing his prior mindset. Bonding over a shared passion for noise music, the two soon moved in together, leading to the creation of 2AM/FM. “We lived a house with a bunch of local musicians in 2000,” says Cantu. “There was a guy who played bass, I played drums, Tadd was working on Dabrye and JTC stuff, and there were a couple guys who played guitar. We had instruments set up in the basement, and Tadd and I would make noise.”

[quote align=”none”]”Jakbeat is more emotionally based. It’s not necessarily grounded in a particular style or genre. It doesn’t really have a formula, but there’s raw emotion behind it.”[/quote]

A year later, the two played a show at Eastern Michigan University, followed by a show on University of Michigan radio station WCBN. “We had no idea it would become 2AM/FM,” says Cantu. “We had a very raw, rugged approach to dance music, which I think gave 2AM/FM’s earlier stuff a real edge, just like that noise background we had been working on for so long.”

Through Mullinix, Cantu met Chicago’s Traxx (a.k.a. Melvin Oliphant III) at a Ghostly party at Necto. “I saw him DJing and I was really blown away,” says Cantu, who played his first single—the stripped-back, distorted, and flanged “No Control”—for Traxx later that night. “He was a really eccentric, energetic guy. I didn’t know what to make of it. At the time, I was looking for someone to take interest in what I was doing… a real honest interest… and from that point forward, Traxx and I bonded on music.”

Cantu traveled back and forth between Chicago and Ann Arbor to work on sessions, collaborating with Oliphant and Mullinix to create the earliest Crème JAK (an offshoot of Dutch label Crème Organization) and X2 material, like “Time Elevation Rhythm,” a full-on acidic adventure blending ingredients from both Chicago and Detroit. “The X2 sound is pretty manic,” says Cantu, noting Mullinix’s meticulous, detail-oriented production style and Oliphant’s odd syncopation and programming rhythms. “You got this really honest sound.”

Between his affiliation with Crème Organization and Mullinix’s overseas pull, Cantu eventually acquired an international reach of his own. His releases (both solo and collaborative) have been issued by labels from around the globe, including Amsterdam’s M>O>S, Montreal’s Forbidden Planet, France’s Desire Records and England’s Signals, plus under New York’s Sequencias, Chicago’s Nation, and Ghostly International’s sister label Spectral Sound, among others.

Cantu may have locked his stance as an acid and jakbeat producer, but his early love for drumming and abstract noise has gradually found its way into his music, as drums are still at the forefront of his sound. “I like to find drum breaks or loops (usually more disco and funk),” says Cantu, “and then just loop those, but not necessarily loop them as comfortably as they should be, so it gives a slight off quality… a little more natural feeling. I think that gives a lot of magic funkiness that you don’t get if you just put straight drums on a sequencer.” He also samples his own drum machines. “I built up a sample library of about 40,000 samples,” he explains, “starting with my own gear and slowly moving into other people’s sample banks. I’ve been collecting and collecting.”

Although he once preferred the analog sound to digital sound when it came to gear, he views it as a moot point now. “If you follow gear at all, you’ve probably heard that Korg, Roland, and Akai have gone out of their way to squash this whole eBay, Amazon, Craigslist trend of buying vintage gear by re-releasing stuff,” says Cantu. “So now that they’ve done that, a lot of it is USB-powered and digital.”

For Cantu, all that matters is whether or not the music sounds good. “I tried to keep that distinction [between analog and digital] five or six years ago, but technology has moved forward so much that it’s really indistinguishable,” he says. “If you’re really invested in what you’re doing, I don’t think it necessarily matters.” This openness to technological advances isn’t all that surprising, as Cantu’s work and education background is in Computer Information Systems. Beyond that, he’s also something of a futurist and a science aficionado, which explains why his material is often sci-fi-inspired, especially his recent Zone 4 EP. “Carl Sagan was a huge inspiration for that,” he says. “I’ve always really enjoyed his documentaries on human existence and the universe. I’ve always liked that thought of ‘You’ve got to keep searching.'” Comic books are another one of Cantu’s passions, as he explains, “I think comic books—much like techno—sort of romanticize this idea of a different future or reality, or an exaggeration of what something is.”

Yet when it comes to his own future, 2015 sees Cantu taking new steps. Next week, he’ll be releasing Decay via UK label Drone, a two-song effort with a b-side that also marks the premiere of his Rival alias. (As it turns out, the track is called “Rival” as well.) “The idea behind Rival goes back to the analog sound,” describes Cantu. “Rival is recorded to tape and it’s one tape session—when it’s done, it’s done. You try to do as much as you can in five to seven minutes.” Other Rival releases will follow in months ahead, along with new material on Nation plus new 2AM/FM tracks. Cantu also has another release called Car Type that’s set to drop shortly after the Drone record through the Run Out Run imprint. “In 2014, I was trying to spread my sound more,” he muses. “For 2015, I’m bringing it back in.”