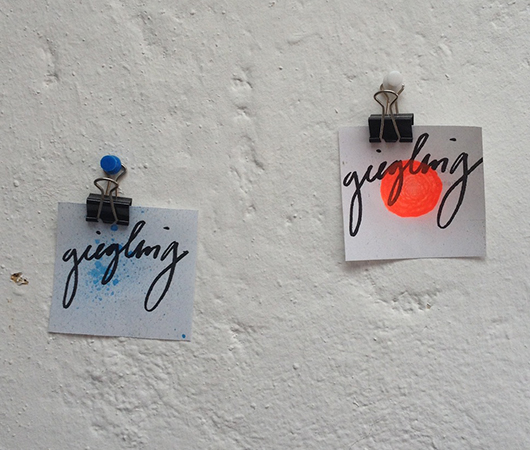 In the rapidly evolving world of electronic music, it’s all but impossible to keep track of every new artist, label, party, and genre. At the same time, certain names will inevitably pop up again and again at the XLR8R office, some of which we’ve only given passing mention to on the site. In an effort to get our readers up to speed with some of the things—both new and old—that we’ve been digging lately, we recently launched a new feature series called ‘Get Familiar,’ which aims to shine a spotlight on subjects we think are worthy of a little more attention. When putting together this particular edition, we honestly had no idea that the folks at Resident Advisor were planning a similar feature that would appear just two days before our article was scheduled for publishing. The RA piece is well worth a read, but we’ve put together our own take, and we’d like to think that Giegling is good enough to warrant the extra attention.

Giegling is a lot of things, but it began as a club and venue in Weimar, an East German city rich in culture and history. After the club’s first owners abandoned it, a group of friends took the spot over, and with the help of a borrowed soundsystem, began hosting their own parties. Shortly thereafter, these friends began pressing their own records, and Giegling the record label was born. But Giegling is more than just a record label—it’s a collective, a tightly knit group of friends and musicians (including Prince of Denmark, Matthias Reiling of Session Victim, and Vril, amongst others) who, over the course of five years, have developed their own idiosyncratic sound: a dusty, emotive, and soulful take on minimal house and dubby techno that is slowly but surely making its mark around the globe.

“Giegling is our story. Something like a diary,” says Konstantin (a.k.a. Herr Koreander, and half of Kettenkarussell, the project that launched the label). “It’s an ongoing story about friendship, exploring life, making mistakes, falling in love. Musically speaking, there’s always a melancholic touch that goes throughout the releases, but also an infantile happiness that makes you smile, and at the same time feel a little bit ashamed.” It’s precisely this human touch that separates Giegling from the pack. The crew’s closest ancestor is the microhouse sound of the early-to-mid aughts, an influence Konstantin recognizes: “We have great respect for labels like Perlon, who managed to keep a vibe for that long and come up with fresh material. I think the difference is that our stuff is a little bit more vulnerable and not so cool.”

Listening to Kettenkarussell’s new album, Easy Listening, it’s easy to hear what Konstantin is talking about. The album opens with a sample of Bruce Lee, his distinctive, accented voice exhorting the listener to “express oneself honestly,” blending seamlessly into “Drama,” a lush, sylvan vision of Krautrock-inspired guitar and gently syncopated beats, sounding futuristic and atavistic at once. Throughout the album (and throughout other releases on Giegling generally) samples of real instrumentation abound: snippets of jazz, drawn-out horn samples, and gentle drum breaks make everything feel grounded, natural, and human, a far remove from the microhouse of the past. As Konstantin says, “I think an interesting aspect [about Giegling] is that most of what we bring out is pretty much imperfect and has something super realistic to it. Something you already did yourself at home, or could have done, or have always wanted to do. All in all, I’d say it’s all about rhythm and blues.”

But Kettenkarussell and the minimal house sound are only part of the Giegling picture. There’s another side to the label, one that trades playfulness, youthfulness, and microhouse for mystery, reverence, and deep dub techno. This is perhaps best represented by the Staub (German for “dust”) series, which launched with Vril’s first record. (To date, there have been seven Staub records, all of them white labels bearing stamps of mathematical and occult imagery, a stark shift from the naturalistic images decorating Giegling’s earlier releases.) “My music is inspired by spirituality, machines, and a ‘feeling’ of techno—not a ‘thinking’ of techno,” says Vril. His sound may be rooted in the dub-techno blueprint of Basic Channel and its many followers, but there is a mystical, otherworldly touch to his productions that distinguishes him from the pack. For Vril, “minimalism” means minimalism in the Steve Reich or Terry Riley sense; dubby, fuzzed-out chords seem to rotate endlessly in his tracks, the force of repetition imbuing them with a hypnotic quality.

Prince of Denmark, the other major player in Giegling’s mystical axis, is perhaps the label’s best-known secret. His tracks have been charted and played out by some of the world’s top house DJs, and his penchant for blending old-school Chicago house flavor with cavernous, ghostly overtones makes his productions both accessible and idiosyncratic. He also maintains an alter-ego, Traumprinz, whose sound is much more in the classic Chicago house vein, often lifting acapellas straight from vintage soul and disco cuts. In an interview accompanying his superb Resident Advisor podcast, he described the Traumprinz persona as a “child,” while Prince of Denmark is a “man.” Speaking with us, he adds, “It’s good to have the freedom that these different personalities provide me,” explaining that “the main reason I said that Traumprinz is a child is that I try to keep hold of that free spirit, the feeling of being able to do whatever you want to do, and to do that with an open heart,” an attitude that’s readily apparent in the looseness and playfulness of his Traumprinz productions.

Ultimately, it’s talent that unifies everyone in the Giegling family. When asked about how he feels about his music on other record labels in contrast to how he feels about his music on Giegling, Vril sums it up nicely: “It really feels natural when I listen to the music from other Giegling acts. Giegling is my spiritual home. I don’t think you’ll find another collection of artists like this in a single label.”