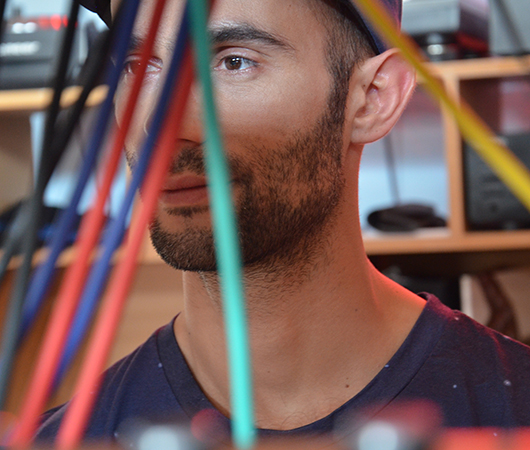 With cheap imitations of old Chicago house and Italo gems appearing with increasing frequency, it could be said that few artists working with these sounds are as committed to authenticity as Massimiliano Pagliara. The Italian may wear his influences on his sleeve, but since moving to Berlin over half a decade ago, he’s been discreetly amassing a discography that’s well on its way to becoming as distinct as that of producers such as Legowelt, Prosumer, or Daniel Wang.

Fittingly, it was Wang that gave Pagliara his first outing, releasing the Transmissions Florales EP via his own Balihu Records in 2008. Exhibiting a fondness for synthetic rhythms laced with slow-burning, psychedelic textures, the music was recorded using an assortment of analog gear that Pagliara had purchased in order to authentically emulate the sounds of the Patrick Cowley tracks and ’80s disco records he loved. “It felt more natural to me to choose the hardware way instead of the software-only kind of direction,” he explains. “After buying my first analog synth, a Roland SH-101, I simply fell in love and became addicted to machines.”

Whereas Wang’s productions usually come with a certain Chicago-style grit to them, Pagliara’s music has a sheen that piqued the interest of those behind Frankfurt’s renowned Robert Johnson club, who asked him for tracks whilst in the process of launching label offshoot Live At Robert Johnson.

This material would form the Toxic Love EP in 2009, which saw Pagliara further exhibiting his natural melodic sense and proving that he could craft a killer vocal cut in the process. Records for Amsterdam’s Rush Hour and the underrated Meakusma imprint followed, but it was the release of his 2011 debut full-length, Focus For Infinity (which also spawned a couple of superb remix singles), that he began to be held in the same high regard as labelmates Lauer and Roman Flügel.

While many of today’s producers struggle with the album format, it’s a place where Pagliara thrives, his expansive compositions finding common ground with both Gatto Fritto’s cosmic sprawl and Mark E’s steady grooves. His tunes rarely rise much above 110 bpm, but more importantly, they all exude the awareness of an artist who began collecting records a long time before he started making them. “DJing came before production,” Pagliara says. “My sets are usually quite eclectic, somewhere between house and disco and all the sub-genres that these two main categories include. Even as a DJ, I do have a special weakness for productions that are made with real machines.”

Three years on, and with a handful of other singles behind him, Pagliara is on the verge of releasing his second album, With One Another. Punchier, and packing more direct thrills than his debut, the LP includes an impressive list of collaborators, such as Telephones, Lee Douglas, Benedikt Frey, and Panorama Bar resident nd_baumecker, who had previously struck up a partnership with Pagliara under the Drei Fragezeichen moniker. Much like his music, it’s clear these relationships are something he values—and considers—a great deal. “These past two years especially, my friends in general really meant a lot to me and so I have been thinking a lot about the importance of a friendship. From this, I went on and started thinking about artistic collaborations as the possibility to exchange something really deep and intense, like a friendship can be.”